Searching for the Isles of the Blessed

Oh my ears and whiskers, how late it's getting! Having, more or less, resurrected and redesigned my book blog, I need to put pen to paper (or should I say fingers to keyboard) and produce a post - after all, writing is the whole point of having a blog. The problem is, what shall I write about? And the difficulty is compounded by the fact that it is almost 10pm and, since I am a lark and at my best early in the morning, I am now tired, jaded and not thinking too clearly. 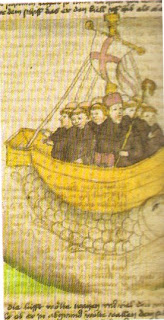 As you can tell from the intro, I was going to write about Alice (prompted by the White Rabbit), but I have plumped instead for another old favourite: Tim Severin's The Brendan Voyage, because today is St Brendan's Day. In its way it tells of a journey just as curious as Alice's visit to Wonderland - the voyage of modern men following the trail of a 7th century Irish saint who sailed to North America in a leather coracle. Severin was intrigued by the accounts in ancient texts of a monk who crossed the Atlantic searching for the Isles of the Blessed. From details in Navigatio sancti Brendani abbatis (The Voyage of St Brendan the Abbot), he became convinced that it was the story of a real voyage, with descriptions of a real places, and that Brendan and his fellow monks really did set foot on American soil - almost 1,000 years before Columbus got there,and hundreds of years before the Vikings.
Secerin set out to prove his theory by building an open boat, from leather, and sailing it from Ireland to Newfoudland, following a route which provided him with stopovers at The Faroe Islands and Iceland.
His book describes his epic adventure, and the months of research and work that were undertaken before the voyage could even begin.  Severin's enthusiasm was infectious, and Medieval scholars, scientists, leather workers, sailmakers, marine experts, sailors and an Irish coracle maker were all involved in the project. From the outset nothing was easy: having constructed a wooden frame, a covering of evil-smelling ox hides had to be hand stitched and smeared with a protective coating - and until the boat (named after the saint) was actually lauched no-one knew how it would fare in sea water, or whether it would stand up to wind and waves.
It was equally uncertain to know if it was possible to cross the Atlantic relying on knoweldge of winds, tides and stars, rather than using modern equipment. And conditions faced by the crew in the cramped quarters don't bear thinking about. During the first part of the adventure bad weather reduced the carefully selected modern dried foods (chosen because they were light-weight, nutritious and believed to be long lasting) to a soupy mess, and they eventually came to rely on the traditional foodstuffs that would have been carried  by the earliest sailors, augmented with freshly caught fish and seabirds. In the same way, the team discovered that clothing made of natural fibres kept them warmer than man-made fabrics, and withstood the conditions.
They battled through storms, struggled to repair their primitive vessel when things went wrong, but refused to give up. Severin's story grips from beginning to end and every time I read it I still chew my fingers as the tension mounts, willing the explorers to reach their goal - which, of course, they do. Along the way they show that the many marvels described in the Navagatio, such as a fiery island, a silver column wrapped in net and a sea monster, were not imaginary marvels, but natural phenomena, like a volcano, an iceberg and a whale.
But be warned - The Brendan Voyage may be a short volume, but it will take a while to read because it's the kind of book that sends you scurying off to look at other books. You'll need a good atlas to trace the journey, and a version of the navagatio, and information about Brendan and the Irish saints, and something about shipbuilding, and Iceland is fascinating, as are the Faroe Islands, and you'll want to know something about Newfoundland, and did the Vikings reach America before Columbus - and if so, did they base their voyage on tales told by those who met Brendan if he stopped at Iceland on his way to the West...
Posted by Christine Harding at 11:24 pm