The Hidden World Beneath London 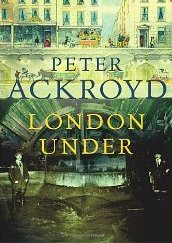 "Tread carefully over the pavements of London for you are treading on skin, a skein of stone that covers rivers and labyrinths, tunnels and chambers, streams and caverns, pipes and cables, springs and passages, crypts and sewers, creeping things that will never see the light of day…”  Who could resist the enchantment of such words scrambling across the page? Not me, certainly, and Peter Ackroyd’s London Under had me hooked from these opening lines right through to the final sentence.
It’s a volume which is far less dense – and a whole lot thinner – than his previous works on the city, London:The Biography and Thames:Sacred River, but it is every bit as fascinating. I’d describe it as an hors d’oeuvre rather than a main course, which leaves you wanting more but is nonetheless immensely enjoyable.
There can be few of us who are not intrigued by the hidden places beneath the ground: indeed, from the dawn of time man’s imagination has been gripped by the magic, menace and mystery of caves and caverns. In myths and legends in a multitude of cultures the underworld is the abode of the dead, while for Christians Hell is somewhere down below. Ackroyd touches on all these aspects and takes on a journey from the stone age to the 21st
century, through ruined buildings, crypts, cemeteries, catacombs, temples, cellars, sewers, tunnels, bunkers, lost rivers and, of course, the London Underground.

Along the way we meet ancient gods, ghosts, smugglers, criminals, sewermen, mudlarks, engineers, miners, writers, sculptors and a host of other characters. Then there are the animals: rats, eels, mice, frogs, mosquitoes which have evolved to live in the dark, stray dogs, pigeons who have lost their way and, if rumour is true, the odd scorpion and crab.
Past and present rub shoulders as he explores the detritus of the city’s past lives: coins jewellery toys, domestic artefacts, workmen’s tools, religious idols.
My imagination is captured by the hidden rivers, enclosed, diverted, covered over. This section called to mind UA Fanthorpe’s Rising Damp, with its list of names like a litany for a lost world:
“At our feet they lie low,
The little fervent underground
Rivers of London
Effra, Graveney, Falcon, Quaggy,
Wandle, Walbrook, Tyburn, Fleet
Whose names are disfigured,
Frayed, effaced.”
The waterways, once filled with fish below the surface and packed with boats above - King Canute sailed up the Effra, while Wren turned part of the Fleet into a Venetian-style 'canal' with a bridge and wharves. However, there were always problems of pollution and eventually these rivers were channelled underground.
Most haunting of all are the lost and ruined lives of the men who contructed tunnels for sewers and trains as disease, floods, gases, fire and explosions took their toll, and the creation of the Tube network left devastation above ground as well, for it involved the demolition of thousands of homes. Since the early Underground trains were coal-fired, there were risks for travellers and workers: as a protection against the sulphurous fumes guards sought permission to grow beards, while passengers who were overcome were taken to a chemist for a ‘remedial’ mixture.
Ackroyd is a very erudite writer. The breadth of his knowledge is astounding but he's never dull or heavy-going, and he leaves clues so we can find the sites where overground and underground are linked. They are places of transition between one world and the other, like the grating where you hear the rushing water of the Fleet, or the door at the bottom of a flight of stairs leading to government tunnels under Whitehall.

I only had two criticisms. Firstly, the quality of the illustrations was not as good as it could have been, and secondly some maps would have been useful.
Verdict: was a fascinating read and I didn’t want it to end. If I could sneak this book on to a shelf I would, but it must go back to the library. To read UA Fanthorpe's poem Rising Damp (with notes) go to  the Independent website at http://www.independent.co.uk/arts-entertainment/the-sunday-poem-1101316.html.
Posted by Christine Harding at 10:12 pm