Wasted Time Will be Refunded

I was going to blog on novels about Alice Perrers, mistress of Edward III, but there was an article in The New Yorker about The Phantom Tollbooth, which is 50 years old, so as I knew exactly where to lay my hands on my battered old Puffin paperback (putting the novels in alphabetical order was definitely a Good Thing) I’ve changed my plans.

The Phantom Tollbooth is one of the great classic stories for children – though whether today’s kids would enjoy it I really don’t know. It was written by Norton Juster, with illustrations by Jules Feiffer and is a perfect pairing of words and pictures. Juster’s imagined world rivals that of Swift in Gulliver’s Travels, while the way he plays with words and logic is second only to Lewis Carroll. He is witty and humorous, but has serious points to make and, as with so much good comedy, there are darker, scarier moments, and some interesting philosophical debates.

It is about Milo, a boy who ‘didn’t know what to do with himself’, and how he makes a magical journey and comes to realise that life is full of wonderful, exciting and enchanting things to do. His adventures start when he finds a surprise package in his room. It’s not his birthday, or Christmas, and he hasn’t been particularly good, so he’s a trifle wary, but inside is a ‘genuine turnpike tollbooth’ which must be assembled for ‘use by those who have never travelled in lands beyond’.
There’s also a map, a book of rules and regulations, some warning signs, coins, and a note which states: “Results are not guaranteed, but if not perfectly satisfied wasted time will be refunded.” Isn’t that delightful? And don’t you wish your wasted time could be refunded?
Anyway, Milo sets off in his little electric car for Dictionopolis, where words grow on trees – well money doesn’t, and something has to, as the residents explain to him. Soon he finds himself caught up in a quest to rescue the Princesses Rhyme and Reason from the Castle in the Air. Only then can peace be established between two warring brothers, Azaz the Unabridged, king of Dictionopolis, who thinks words are more important than numbers, and the Mathemagician, ruler of Digitopolis, who believes numbers are more important than words. 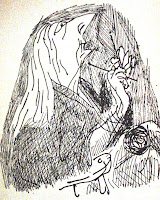 Milo is accompanied on his journey by his new friends, Tock the Watchdog (whose body is an alarm-clock which goes tick) and the Humbug, a large beetle-like insect dressed in ‘a lavish coat, striped trousers, checked waistcoat, spats, and a derby hat’.

The cast of characters he encounters include a Spelling Bee (one of the most inventive insects ince Carroll’s rocking-horse fly made its appearance); Faintly Macabre, the not-so-wicked-witch and Choma the conductor, whose orchestra makes no sound but plays the colours of each sunrise and sunset.

There are also all kinds of demons and monsters who inhabit the ‘evil unenlightened’ mountains of Ignorance: “And out the demons came – from every cave and crevice, through every fissure and crack, from under the ricks and up from the mud, stomping and shuffling, slithering and sliding, though the murky shadows. And all had only one thought in mind: destoy the intruders and protect Ignorance.” 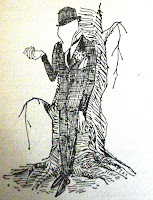 Most chilling of all to my mind is the well-dressed man with a blank face – so blank he has no eyes, nose or mouth. Feiffer’s picture has a nightmarish quality, and looking at it now I wonder if it provided inspiration for the faceless victims of The Wire in the Dr Who episode The Idiot’s Lantern.

Needless to say, in the manner of all good fairy tales, there is a happy ending and Milo returns home, but the tollbooth disappears. Initially he is upset that he will be unable to make another journey, but when he looks around he sees the world, and his room, for the first time and realises how much there is to do:
“... there were books that could take you anywhere, and things to invent, and make, and build, and break, and all the puzzle and excitement of everything he didn’t know – music to play, songs to sing, and words to imagine and then some day make real.”

But The Phantom Tollbooth, like Frank L Baum’s Wizard of Oz (which it resembles in some ways) is more than a fairy tale: it’s an allegory, and Milo’s journey of self-discovery echoes Christian’s travels in John Bunyan’s Pilgrim’s Progress. The places he passes through, and the creatures and people he meets are all concepts he rather than fully rounded characters, but nevertheless they spring off the page with a life of their own. Above all, however, it’s a book by someone who loves language, and loves to play with language, and that’s something to be admired and enjoyed.

If you want to take a look at the article in the New Yorker, which is a fascinating read, you’ll find it at http://www.newyorker.com/reporting/2011/10/17/111017fa_fact_gopnik#ixzz1amReQLfl. 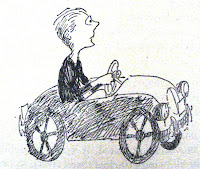 Posted by Christine Harding at 7:17 pm