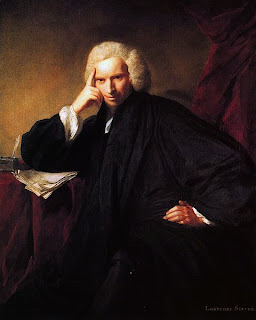 Right, here as promised, is my second book in the Ireland Reading Challenge organised by CarrieK  at http://booksandmovies.colvilleblogger.com. In my last post I said I was a little out of synch due to my holiday on the Isle of Man, but although I didn’t do much writing, it was a good place to read, and I managed to complete one of my ‘new’ choices – A Sentimental Journey, by Laurence Sterne.

Sterne, born in Clonmel in Ireland in 1713, is best known for the incomparable The Life and Opinions of Tristram Shandy, Gentleman, which is quite unlike any other book in the English language, butI knew nothing of him or his other work until I spotted this in a charity shop.
Now back home and re-connected to the internet, I’ve done a bit of research and discovered that Sterne spent his childhood moving around Ireland with his father’s regiment, but at the age of 10 was sent to relatives in Yorkshire. In 1738 he became a vicar in a village near York, where he lived for some 20 years, during which time his writing was confined largely to letters and sermons, with a little politics thrown in. He was 46 when he penned the first volume of Tristram Shandy in 1759, and his writing career was brief as he died from consumption less than a decade later.
A Sentimental Journey, envisaged as a four-volume venture, charting a trip through France and Italy, was published in only two sections in 1768, just a few weeks before Sterne’s death. It was completely different to any previous travel book, satirising the pompous descriptions of Grand Tours where authors focused on descriptions of scenery and buildings, with plenty of classical allusions and observations on local customs, religion, antiquities and so on.
Instead Sterne’s work, which purports to be written by Mr Yorick, highlights his encounters with , such as La Fleur, the cheerful but inexperienced manservant he employs in France; an elderly monk seeking donations for his convent; a down-on-his-luck Chevalier who has turned his hand to patisserie, and Monsieur Le Count de B**** who sorts out his passport problem (‘Yorick’ has travelled to France, now at war with England, without the necessary document, and fears he may end up in the Bastille).
Then there are the women he meets – Yorick (like Sterne himself) has an eye for  the ladies and obviously enjoys their company, whether they be working girls or society women – at the end of the book  he finds himself sharing an inn room with a fine lady and her maid.
Alongside that he finds time to mention the small,  idiosyncratic things that catch his eye: a dead donkey blocking their road, or a caged starling endlessly repeating the words ‘I can’t get out’  (which he sees as a reflection on his own situation should he fail to solve his passport problem).
Describing the various types of traveller he tells us he has decided to be ‘sentimental traveller’ and that his observations will be ‘altogether of a different sort’ to anyone else. He says:

“I have not seen the Palais royal; - nor the Luxembourg – nor the Façade of the Louvre – nor have attempted to swell the catalogues we have of pictures, statues and chuches – I conceive every fair being as a temple, and would rather enter in and see the original drawings and loose sketches hung up in it, than the transfiguration of Raphael itself."

That is a pretty accurate description of the book, which has no plot and is probably closer to the picaresque tradition than anything else, consisting of a series of loosely connected episodes. It’s difficult to know whether the book represents a true account of Sterne’s travels (he journeyed abroad in 1762-4 and again in 1765-6), whether some aspects were borrowed by the experiences of acquaintances – or whether incidents and people are totally fictitious. 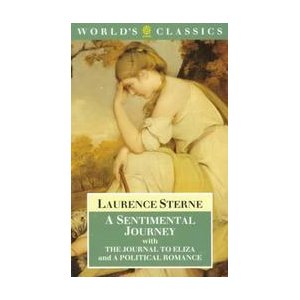 It’s a very slender volume, but I found it required concentration. Stylistically it isn’t always an easy read, and language has changed over the last two and half centuries. Some words have altered their meaning, while others have fallen out of use. To some extent I suppose, A Sentimental Journey has become something of a curiosity, but it has a certain charm, not least because Sterne accepts that people are a mix of good and bad, just as he accepts the conflict between the demands of the flesh and the spirit, in himself and others.

Strangely, after his death his body was stolen by grave robbers for anatomy students, but was recognized and reburied in unmarked grave at Paddington. A skull believed to be that of Sterne (the top was sawn off, a custom carried out by medical students) was recovered in 1969, and reburied in the graveyard of St Michael's Church, Coxwold.
Posted by Christine Harding at 5:03 pm