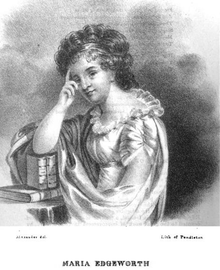 Before reading Castle Rackrent my knowledge of Maria Edgeworth was limited to the fact that she is reputed to have been Jane Austen’s favourite author, and that Sir Walter Scott admired her. This was the first time I’ve read any of her work, and it’s been an interesting experience.
She was the eldest daughter of Richard Lovell Edgeworth, an Anglo-Irish landowner who had four wives (not all at the same time, obviously) and 22 children, which sounds extraordinary by modern standards. Born in England in 1768, she was only six when her mother (the first Mrs Edgeworth) died. The oddest fact about her (apart from her father’s proclivity for wives and children) is that while at school she almost lost her sight though an eye infection, and her father (who looms large in her story), recommended that she take up arithmetic because it ‘requires no attention of the eyes’, which sounds bizarre, but perhaps he felt resting her eyes would effect a cure.
On a more sensible note, when Maria was 14 the family finally returned to their Irish estate at Edgeworthstown, where she lived until her death in1849. From the outset she played a pivotal role in family life, teaching her younger brothers and sisters while continuing her own education under the tutelage of her father, and also helping him to restore and manage the run-down estate. She corresponded with many of the learned figures of her day, including members of The Lunar Society, and developed her own views on education, estate management and politics, but never married, insisting that it was better to remain a spinster than to have an incompatible partner.
It’s worth noting that during the potato famine of the1840s she wrote a book to raise money for a relief fund to help the starving , and did what she could to publicise the crisis - but she was adamant that her own tenants would only receive assistance if they paid their rent in full.
As far as Maria Edgeworth’s writing goes, I was surprised to learn that she wrote children’s books and essays, as well as novels, and that she is considered to be something of a trailblazer by showing the Irish in real settings and reproducing their speech. In Castle Rackrent she includes a glossary set into the main text to explain these terms, with additional notes on history and customs. This was, apparently, a totally new device, but I thought it distracted from the story. Equally ground-breaking was the idea of using estate worker Thady Quirk as  narrator, telling us how four generations of Rackrents frittered their money away. Personally I found her style difficult.  It is a satire, and it was very funny in places, but the language seemed convoluted and archaic, the plot was thin and the characters lacked definition. However, this was her first novel, written in 1800, and I would like to read more of her work to see how her style developed – perhaps The Absentees would have been a better choice.
Trying to explain why she wrote, she said “Seriously it was to please my Father I first exerted myself to write, to please him I continued.” I get the impression she always had enjoyed telling stories to friends and family, and that maybe she hoped that through humourous novels she could highlight the need for change in the way Irish estates were managed. Whatever her reason for writing, Maria Edgeworth was hugely popular: for a time her earnings outstripped Scott and Austen, and she seems to have enjoyed the acclaim she received. She was more highly thought of in England than Ireland, but towards the end of her life she was made an honorary member of Royal Irish Academy.


This was posted for the What's In A Name Reading Challenege at http://www.bethfishreads.com/2012/01/whats-in-name-5-type-of-house.html
Posted by Christine Harding at 1:27 pm