Paris with a Dashing Dish

Ernest Hemingway must, I think, have been a bit of a sod. Incredibly charismatic, yes. Talented, yes. But a sod, nevertheless. I base this opinion upon ‘The Paris Wife’, a novel in which author Paula McLain gives voice to Hemingway’s first wife, Hadley Richardson, with whom he lived in Paris during the early 1920s.

Before I proceed any further can I mention that I recently spent quite some time sitting on the floor in the library perusing a very large volume of a Hemingway biography which seemed to support my view, as well as showing just how well researched McLain’s book is.
Anyway, to return to Hadley. Following a childhood accident (she was injured falling from a window) she led a sheltered life under the thumb of her mother who was, at best, over-protective – or, at worst, very controlling. A college course didn’t work out, and Hadley abandoned hopes of becoming a professional pianist because she felt she was not good enough. She nursed her mother through her final illness and, following her death, visited an old friend in Chicago.
There she met Hemingway and the rest, as they say, is history. Hadley, nearing 30, was eight years older than the young writer, but the attraction between them seems to have been instant and irresistible, and they were married less than a year later, in September 1921, despite disapproval from their friends and families.
Here, as another aside, could I say that the young Hemingway was dashingly dishy, which came as something of a surprise since I had only seen photos of him when he was old and grey, and really rather stout. I know, it’s very frivolous of me to comment on such things when I am supposed to be writing a serious review, but in the book, without ever being too explicit, Hadley makes it clear that the physical chemistry between them is a vital part of their relationship, and that he is a good looking man who is attractive to other women, so I think my observation is justified.
In Paris Hadley and Hemingway (I suppose I should call him Ernest, since that is how he is referred to in the novel) live on her legacy and his meagre salary as a journalist. They love and drink and quarrel and love again, and give each other tender nicknames. They become part of a charmed circle of avante-garde writers and artists, including Ezra Pound and Gertrude Stein.
Their first flat, which echoes with the sound of accordion music, is next to a dance hall, and the cobblestone streets are full of drunks, beggars, tramps and prostitutes. McLain is good on giving a sense of place as she describes cafes, markets, rooftops, the Seine, bare chestnut trees. I loved this little passage:
Fishermen were stringing their lines for gougon and frying them up on the spot. I bought a handful wrapped in newspaper and sat on the wall watching the barges move under Pont Sully. The nest of fish was crisp under a coarse snow of salt and smelled so simple and good I thought they might save my life. Just a little. Just for that moment.
It seems somehow to encapsulate Paris, and Hadley’s time there – for we know the marriage cannot last. And it doesn’t. We follow her and Hemingway as they journey to Italy, Germany, Pamplona (for bull running and bull fights) and Toronto (where their son is born), and watch as Hemingway becomes more successful, quarrels with old friends, acquires new ones, and becomes part of the café society he once despised. Gradually the Hemingways’ marriage falls apart as Ernest embarks on affair with a woman Hadley regards as a friend. 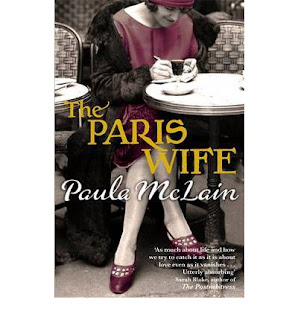 Somehow Hadley is out of tune with the independent Bright Young Things and Bohemian women of the ’twenties. She is actually a very engaging heroine. She is bright, lively, intelligent, naïve, loves music, dotes on her little boy, and cares little about her appearance or what she wears.  She sees herself as a kind of helpmeet, doing all she can to ensure Hemingway is happy and able to work, for she believes in his genius. I think she is totally besotted by him and sees him as a scared boy hidden beneath the macho male who likes to be in control, and loves sport and courting danger – she wants to reassure that scared boy and keep him safe from harm. And she wants him to be happy, even if it means losing him.  I liked her, and I was glad she eventually remarried and found peace and happiness.
There are a few chapters written from Hemingway’s perspective, but I find it difficult to decide if he was scarred by his experiences as an ambulance driver during the First World War, when he was seriously wounded  after just a couple of months, or whether he was shaped by his family (with whom he seems to have been at odds). Or perhaps that’s way the way he was, and there was no reason.
It’s not easy writing a fictional account of people and events from the recent past, because so much has already been written, and so much information is available, but McLain has used the existing data and spun a new tale, filled with emotional intensity, that throws fresh light on Hemingway and places his first wife in the spotlight.
Posted by Christine Harding at 11:10 pm