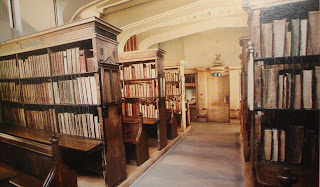 "In most old libraries the books are chained to the shelves to prevent them from being damaged by people. In the Library of Unseen University, it's more or less the other way around." So says novelist Terry Pratchett in Sourcery, and I’m inclined to think if it’s good enough for Discworld, then it’s good enough for us.

However, I suspect custodians of the Chained Library at Hereford Cathedral would not subscribe to Pratchett’s reasoning - although I half expected a large, orange orang utan to swing in to view, eating a banana and shouting 'Ook'.  Anyway,  conventional wisdom would have us believe books were chained to prevent them being stolen. But after seeing them I’m puzzled. Many of the books are enormous – they are so large and heavy, often with covers of wood and leather, that it would be difficult heaving them down from the shelf, let alone carrying them any distance. Plus, I would have thought their sheer size would have meant a thief would be spotted fairly quickly – you certainly couldn’t stroll out with a book stuffed under your cotte. 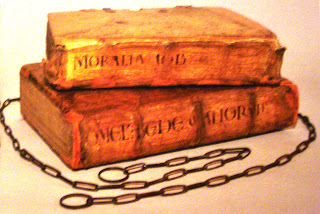 I know books were scarce and valuable, but these volumes are not the kind of thing that could be easily flogged in a tavern or market and, since few people could read, they would only have been of value to monks, clergymen and scholars. All in all I can’t understand why anyone would have wanted to steal books, especially when you consider the draconian punishments imposed on wrong-doers.

So, was chaining books really the most widespread and effective security system in European libraries from the middle ages through to the 18th century? Or have we all missed the point and was the object of the exercise not prevention of theft, but a show of wealth and a demonstration of power? That thought takes me back to Patchett again, for according to him: “Books contain knowledge, and knowledge equals power, which according to the laws of physics can be converted to energy and matter, so the Library contains an extremely large mass that can distort time and space.” Forget about the distortion of time and space, but I think he’s right about knowledge and power. 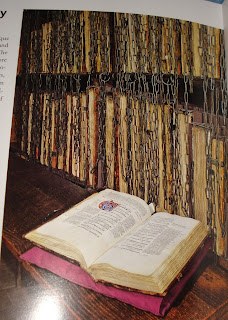 Whatever the reason, Hereford’s 17th century chained library is fantastic, and is well worth the entrance fee. It’s housed in a new building (alongside the famous Mappa Mundi) and is an amazing place, very quiet, very peaceful, with centuries-old books stored in tall wooden cabinets, each with its ledge where books can be rested as they are read, still chained securely to their protective rail. These days, of course, common visitors like me cannot lift the books down, although I believe they are available (by request) to scholars, and there are smaller, thinner facsimiles in an excellent exhibition in a separate room.

The first thing you notice is that the books are stored upright, the wrong way round compared to modern custom – the spines are at the back of the shelves, where they cannot be seen, and it is the page edges which face you. Each book has a metal chain, attached to the front edge of the cover with a hasp, with a ring at the other end slotted over a metal rod which runs the width of the cabinet. The books can be lifted down and read, but the chain cannot be removed unless everything is unlocked. 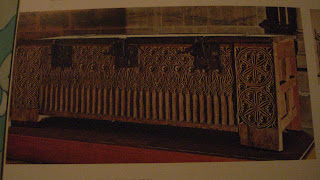 Books are stored alphabetically, and at the end of each cabinet are index boards listing the contents. The bookcases and chains date from around 1611, but many of the volumes stored here are far older – the cathedral has had a library for 900 years or more, and contains hand-written illuminated manuscripts, as well as early printed works. The oldest book in the collection is the Hereford Gospels, created in the 8th century, at the same time as the Book of Kells and the Lindisfarne Gospels.

The exhibition on the library was fascinating, with information about the way vellum was produced and manuscripts produced, as well as details about the development of printing and the way books have been stored over the years. And there were two fabulous book trunks, which bowled me over. One, beautifully carved, had three locks, and the key for each was kept by different people, so no-one could access it on their own. The other was plainer, with a huge iron ring at each end, to hold a sturdy wooden pole, so the chest could be carried along when high-ranking clergymen went on their travels – I wonder what they would have thought about modern, light-weight E-readers! 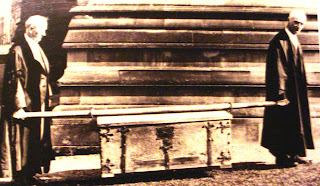 The guides manning the library and the exhibition were really helpful and informative (as was the man who told us about the Mappa Mundi), and we also enjoyed wandering around the rest of the cathedral, before treating ourselves to coffee and home-made cake in the cathedral café. A perfect day!

By the way, photography is banned in the library, so the pictures are from the guide book, Rare Treasures of Hereford Cathedral, Mappa Mundi, the Chained Library and Magna Carta, which is available from the Cathdredal Bookshop. 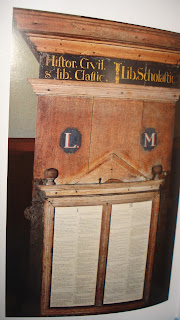 Posted by Christine Harding at 11:08 pm