Yellow Penguins are SO cheerful! I wasn't even aware that the vintage numbered Penguins included this 'miscellaneous' range, until I found two of them in a charity shop, for 99p each. They are both in really good condition and, despite their age, the yellow covers are still bright and cheerful, and I simply couldn't resist them. They both fall into the 'humorous' category, and it's interesting to see what made people laugh more than half a century ago. 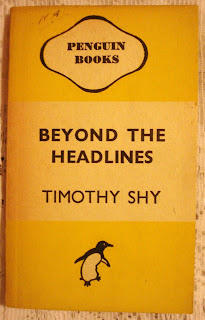 Beyond the Headlines, by Timothy Shy (Penguin 341) is a collection of pieces from the long-defunct News Chronicle, which was a popular daily paper when this book was printed in 1941. Timothy Shy was the nom de plume used by Dominic Bevan Wyndham-Lewis for his column in the paper – at an earlier stage in his career he was the original Beachcomber at the Daily Express, and co-edited 'The Stuffed Owl', an anthology of bad verse by great poets, so he obviously had a keen sense of the absurd, but some of his work would definitely not produce laughs today, and would be regarded as distinctly politically incorrect. For example, use of the word 'cretins' in a headline would not be countenanced today in any publication, whatever the context.

These pieces are sketches on life, in which the author takes pot shots at politicians, celebrities and anyone (or anything) else that takes his fancy. Like many similar writers he frequently sounds snide, and makes his point through allusion and innuendo, rarely naming names or explaining his comments. Presumably this technique offered some protection against a libel action, and readers must have understood who (or what) it was all about, but from a distance of 71 years it was hard to grasp. I couldn't imagine anyone laughing uproariously today, but some of the less topical entries did make me smile. 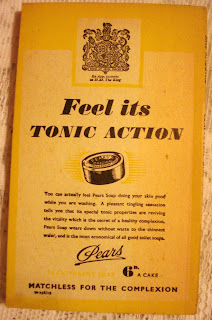 For me the charm of the book lies in the gorgeous dancing penguin on the front (I do wish the company would reintroduce it) and an advert on the back cover for Pears transparent soap, which cost the princely sum of sixpence a cake - old money, obviously – this was well before decimalisation.

The ad urges readers to 'Feel its tonic action'  It also claims the soap is 'matchless for the complexion' and that it 'wears down without waste to the thinnest wafer' , a huge selling point during WW2 when everything was in such short supply. There's even a 'by appointment to H.M. The King logo!

There's another ad inside for 'The Business Woman's Opportunity'extolling the virtues of taking out a policy with the Prudential Assurance Co. Ltd., the benefits of which included 'a Dowry when you marry' for women who were 'not over 34'. How times have changed!

Paper was in short supply during the war, so the book is printed on rather coarse paper, and Penguin supported an appeal for books to be sent to the forces. A plea for donations printed at the front says: “When you have read this book, please leave it at your nearest Post Office, so that the men and women in the Services may enjoy it too.” 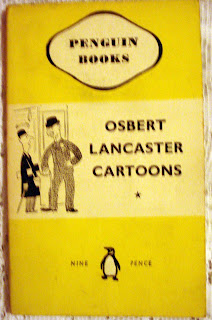 The second yellow Penguin is Osbert Lancaster Cartoons (number 501) which was published slightly later, in February 1945. The dancing penguin is still there on the title page, but has vanished from the front cover, and the book cost 9 pence. Like 'Beyond the Headlines', the paper is obviously of inferior quality, and the cartoons are very much of their time, and not at all PC: they would probably mean more to someone who remembers the war and rationing, but having said that many of them have stood the test of time and are still funny – well, they made me laugh.

By the time this book appeared Lancaster was working as press attache for the British Embassy in Athens, so these cartoons must have originally been printed at a slightly earlier stage in the war. Somehow the style of drawing does not seem as sharp as it later became, though that could be down to poor paper and print quality, coupled with the fact that we are used to seeing his work in a smaller format, since he was famous for his 'pocket' cartoons. 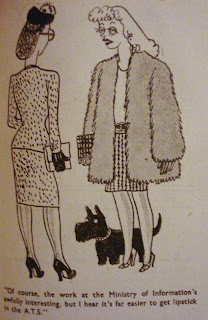 But his witty observations on the social order are present in abundance, and the cast of upper class characters who became so familiar in his post-war work are already clearly defined. There are military men, naval commanders, socialites, landed gentry, and businessmen, many of whom seem to have a somewhat tenuous grasp on reality. I rather like this ditzy blonde airhead, who knows that war work at Ministry of Information is interesting, but is attracted to the ATS - because it's easier to get lipstick in the Auxiliary Territorial Service!

And while I'm not sure when Maudie Littlehampton, his most famous creation, made her first public appearance, I found myself looking at the women and thinking some of them could be an embryonic countess.

Whilst both these books are curiosities, which I bought to add to my small collection of vintage Penguins, I enjoyed this one, and it's a volume I would pick up and look at if I need a laugh.

And there's even a cartoon featuring penguins, which must be a reference to comments or decisions made by a European leader, but who it was, or which country, I have no idea, although I can see it is total nonsense to claim to be neutral while defending territory. Anyway, since this is a post about vintage Penguins, I couldn't resist including the cartoon! And if anyone can explain it, or place it in the correct historical context, I would be enormously grateful. 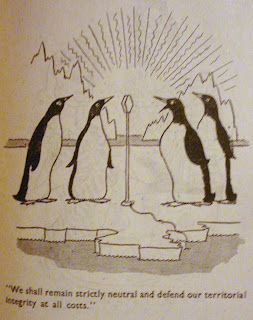