I've been particularly well organised with my last library haul - I surprise myself sometimes! I've read all four of them, and resisted the temptation to go in and get more every time I passed the building, and kept them altogether on a shelf, and not lost them, or forgotten them, and not kept them too long. I really enjoyed two of my selections, but didn't like the other two at all. I was especially disappointed with Jeanette Winterson's 'The Daylight Gate' because I usually admire her work. Anyway, I've written a brief review on each book, and found it an interesting exercise - it's a while since I've written to length, so I set myself a limit of 300 words for each volume, and only went over on one. 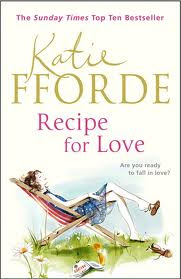 Recipe for Love, Katie Fforde: You’re always in safe with Katie Fforde. This, as ever, is light, fluffy and very enjoyable.  It owes a lot to reality TV cookery shows, and even more to Jane Eyre, but is none the worse for that. Zoe Harper comes to the rescue when a grumpy, arrogant (but very desirable) man puts his car in a ditch. He turns out to be Gideon Irving, a judge for the cookery competition where our heroine is a contestant... There is an instant attraction between the pair, but misunderstandings must be sorted out before true love can prevail.

The plot moves along at a nice pace and the setting of Somerby House (which can be found in several other Fforde novels) is delightful, as are the recipes dished up for the televised contest, which is part Great British Bake-Off and part Master Chef. The cooks themselves are a nicely balanced mix of people, including Zoe’s room-mate, the splendidly nasty Cher, an airhead who is more interested in fame than food, and will do anything to win.

I could be critical and point out that there is certain similarity in many of Fforde’s plots and characters, but the same could be said for Jane Austen, who I love dearly, so I’m really not complaining – after all, Fforde knows her strengths, and is one of the greatest exponents of the romantic fiction genre. However, despite that, and despite the fact that I like comfort reading and happy endings, I can’t help feeling it might be nice if she ventured into new territory.

The Thoughtful Dresser, Linda Grant: Difficult to know how to describe this.  Definitely not a novel, although it was on the fiction shelves – more a series of reflective essays on the importance of what we wear. There are interviews and historic research alongside Grant’s own thoughts. For many women, it seems, having the right outfit is an empowering and uplifting experience, and it was interesting to learn that for some dispossessed women (like the concentration camp survivor) the acquisition of even one pretty, colourful garment is something really special.

I can quite understand that wearing something nice can make you feel better – having lost weight over the last few months I’m currently working my way through  things I haven’t been able to wear for four years and yes, that makes me feel good.
But Grant’s view of clothes is an alien concept as far as I’m concerned, and I really can’t get that excited about garments, shoes and accessories, let alone the designer names she mentions.

I’ve never believed people should be judged by what they look like or what they wear because it’s who you are as a person that really matters, and I’m much more likely to spend money on a book than something to wear, so I guess I’m the wrong person to appreciate this volume. 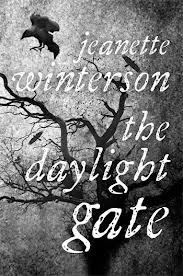 The Daylight Gate, Jeanette Winterson: A novel about the Pendle Witches which I picked it up because a) I normally like Jeanette Winterson and b) she presented a fascinating programme about the witches on Radio 4, but I was not at all keen on the book. Winterson throws everything into it – child abuse, a Gunpowder plotter, William Shakespeare, astrologer and occultist Dr John Dee, and a Catholic priest (remember, this was a time when Popish practices were banned, and some scholars now think the ‘coven’ may have been a small congregation of Catholics).

The book is published by Hammer, which should provide a clue that this is a horror story in the tradition of those old films. Magic and the supernatural rub shoulders with religion and the everyday, and some of the action is very nasty indeed, but you wouldn’t expect a story on this topic to be anything but gruesome. However, all those magical elements and the blurring of the margins between fantasy and reality really didn’t work for me. I think I would have preferred less mumbo jumbo and a greater exploration of people’s motives and relationships (but then, of course, it would have been a completely different book).

Sadly, nothing pleased me about ‘The Daylight Gate’ – even Winterson’s prose seemed to lack its usual power and dexterity. I was disappointed, but I kept comparing the novel with ‘The Crucible’, Arthur Miller’s great play about the Salem Witches. It’s an unfair comparison, since Miller’s work is also an allegory about the political situation in America at the time he was writing, but I couldn’t help myself, and Winterson didn’t match up to this masterpiece.

A Red Herring Without Mustard, Alan Bradley: This was my first encounter with child sleuth Flavia de Luce, and it was absolutely brilliant! If you’ve never read any of the mysteries featuring the 11-year-old prodigy and her trusty steed (a bicycle called Gladys) then I suggest you do so. Immediately, if you please. Flavia is precocious and opinionated (as well as being a genius at chemistry), and I can well understand how irritating her sisters find her. But for all that she’s very engaging and it’s hard to dislike her. Most of the time you (and Flavia) forget she is an 11-year-old girl, until the turns of the plot make you (and her) remember just how young and vulnerable she is. Pitting your wits against the characters in a bid to reveal who dunnit, and why, is one of the great pleasures of any good detective novel – and you can do that no matter how old the investigator is.

The novel opens as Flavia accidently sets fire to a gypsy’s tent at the village fete. Hours later she discovers the old gypsy lying barely alive in a pool of blood in her caravan, which is parked up on the de Luce family’s land. Then Flavia finds a body suspended in the fountain. Are the attack and the murder connected? And is there a link to a child who disappeared? And what about the Hobblers, a strange religious sect who are convinced the Kingdom of God lies a few feet above the ground? And why do the de Luces’ antique fire dogs vanish and reappear – in three different places?

Inspector Hewitt and his team of policemen are called in to solve the crimes but, needless to say, it’s Flavia who finds the answers. As you might expect from the title, red herrings abound, and there’s a strange, fishy smell that keeps cropping up. If you like taut, psychological crime thrillers then this is not for you. But if you like your crime novels to be ‘cosy’ and rather quirky then I’m sure you will enjoy this.
Posted by Christine Harding at 1:00 am