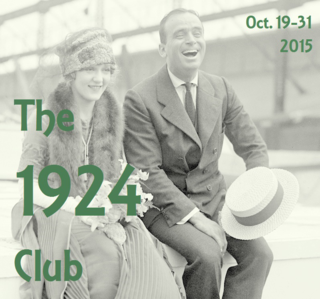 It’s been a while since I wrote anything here, but I seem to have been busy doing all sorts of other things, and never did get round to post reviews on some of the bools I read for All Virago, All August. My track record on joining in challenges and read-alongs is not very good I’m afraid – I always seem to fall by the wayside. However, that doesn't deter me and, like many other bloggers, I can’t resist The 1924 Club, jointly organised by Simon at Stuck in a Book and Karen at Kaggsy's Bookish Ramblings.


They want us all to spend a week in October reviewing books published in 1924, and they say we can include posts which have already appeared, as well as ‘new’ reads. My first reaction was one of sheer horror, because I cannot recollect when any of the books I’ve read were written or published. But when I looked at some of the suggested titles, and the ideas listed by other bloggers, I realised I’ve already written about some books from 1924 (Pink Sugar, by O Douglas, for example). And a quick rootle through the shelves revealed Winifred Holtby’s The Crowded Street (which I’ve read) along with The Rector’s Daughter, by FM Mayor (which I haven’t) and Margaret Kennedy’s The Constant Nymph (ditto). So I should have something to write about between October 19 and 31, which is when The 1924 Club takes place.


The idea, according to Simon and Karen, is to get everyone reading from a particular year. “It could have been many different years, really,” explains Simon on his blog. “But 1924 seemed to have a lot of significant works published, as well as generally being an interesting time. If the project is a success, we can repeat it in the future with other years.”


You’ll find all the details you need at Simon and Karen’s blogs (just click on the links above). They will issue posts so you can link your reviews, and a final round-up, so each participant can see what everyone else has read.
Posted by Christine Harding at 3:53 pm