FORGET Hollywood. This is the story of the forgotten British heroes who rescued vital documents about the Enigma code from a sinking German U-boat – and there isn’t an American accent within earshot.

The paperwork retrieved gave experts at Bletchley Park the breakthrough they needed to crack the Enigma code, and their new-found knowledge helped ensure an Allied victory and is thought to have shortened WW2 by as much as two years.

This lost chapter of the history of the war remained shrouded in secrecy for some 60 years, until it was uncovered by journalist Phil Shanahan, whose book The Real Enigma Heroes has just been issued in paperback by The History Press.

Phil’s interest was aroused when a junior reporter announced that the retired miner he had just interviewed claimed a Tamworth man who served with the Royal Navy had virtually won the war.

Initially Phil (and his colleagues) were sceptical. The story seemed unlikely – if this extraordinary claim was true, how come no-one had heard about it before?

But for some reason Phil didn’t dismiss it out-of-hand.

His first tentative inquiries revealed that, amazingly, the story was true. The actions of Colin Grazier, from Tamworth, Staffordshire, had helped win the Second World War – and the 22-year-old Able Seaman lost his life in the process. 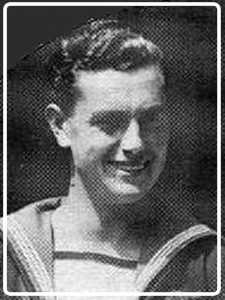 Colin Grazier was serving aboard HMS Petard on October 30, 1942, when he and First Lieutenant Tony Fasson dived into the water to board a holed German submarine.

They passed German code books up to canteen assistant Tommy Brown, who joined them on the coning tower.

When the U-559 suddenly sank, teenaged Tommy leapt to safety, but the other two men failed to make it back to the surface and their bodies were never found.

Years later the heroes were recast as fictional Americans in the controversial Hollywood film U-571.

But as he continued his researches Phil became determined that the true story should be known, and that the three men should win the acclaim they deserved.

He amassed a collection of old photographs, letters and memories.

And his campaign for recognition, backed by the Tamworth Herald (the newspaper where he then worked), won support from leading show business personalities, MPs and royalty.

Now the square in Tamworth town centre is dominated by a statue of three giant anchors, a tribute created by world renowned sculptor Walenty Pytel, and there is an annual memorial ceremony on Grazier Day, held on the nearest Sunday to October 30.

There is an exhibition about the Enigma heroes at Bletchley Park’s Hut 8 – the very place where the German Enigma codes were cracked and Phil himself was honoured when he showed Prince Charles and the Duchess of Cornwall the display and presented them with a hardback copy of his book.

I worked with Phil at the Tamworth Herald, so this review may seem a little nepotistic , but The Real Enigma Heroes is a rattling good read, in which the story of Grazier, Fasson and Brown unfolds alongside the tale of Phil’s efforts to track down information , his battles with bureaucracy as he tried to establish a permanent monument to the three men, and the hard work involved in raising cash for the project.

People who are passionate about their subject or interest often find it difficult to translate that enthusiasm into words on paper but Phil’s fervour for putting this forgotten incident into the public domain is infectious.

He has included a wealth of pictures and his book is very well written It is every bit as gripping on the second or third reading as it was on the first.

We all owe a debt of gratitude to Colin Grazier, Tony Fasson and Tommy Brown – and we should also acknowledge Phil’s tireless efforts to ensure the story of these three brave men is never forgotten, and that they take their rightful place in history.

* Phil Shanahan was a journalist for more than 20 years and was awarded The Freedom of Bletchley Park for his efforts in gaining Grazier, Fasson and Brown public recognition. The campaign he led to honour the Enigma heroes won three of the biggest awards for campaigning regional journalism in the UK.
He now runs his own writing/photography/publicity business, and gives talks about The Real Enigma Heroes – find him at http://enigmacommunications.co.uk/
Posted by Christine Harding at 8:23 pm