Off the Shelves of the Charity Shops 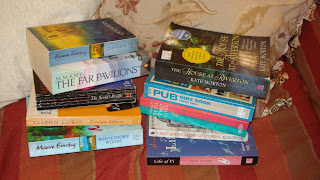 I WENT to town to buy cat food and loo rolls - and came home with two bags of books. That's because charity shops are a fantastic source of bargain books, and I can rarely resist the chance to browse. Toady was no exception, and I trawled though the stacked shelves of several such stores, acquiring ten books for £7 - that's 70p a volume - which I thought was pretty good value. Mind you, I forgot about the rest of the shopping, and had to go out again later!

I found a pristine copy of MM Kaye's The FarPavilons,which I read many years ago, but wanted to read again after hearing it dramatised on Woman's Hour. It is regarded by many as 'just' a love story, but is far more than that, painting a picture of India in the 19th century that encompasses the land and its people, as well as its British rulers. The author knew and loved India, so I am looking forward to reading her fictional account of a particularly turbulent period in the country's history.

Next off the shelves was The House at Riverton, by Kate Morton, which I bought a couple of years ago, failed to get beyond the first few pages, and gave away. But it had reasonably good review on the Vulpes Libris website, so I thought I would try it again, and see if perseverence pays off - I'll keep you posted on the outcome!

Alison Lurie is one of my favourite authors - if you haven't read The truth About Lorin Jones, please do so. It's a brilliant novel, charting a writer's efforts to research the life of a famous artist, and shows how each person is perceived in a different way by the people they come into contact with, but each of those views goes to make a composite whole. Anyway, I digress, because the book I actually bought is Foreign Affairs, which I am sure I will enjoy reading.

I am not sure if enjoyment will be the right word to describe my next purchase, or whether I shall even like it. It is The Scold's Bridle, by Minette Walters and I intend to 'give it a go'. I have never read any of her work, and I am not really an enthusiast of the crime genre, other than Cadfael, Morse and Mma Ramotswe. I suspect this have a darker edge than any novels featuring the detectives named above, but it will be interesting to try something which is a little outside my usual comfort zone.

However, having said I am not a crime fan, I did pop another detective novel into my bag of bargains: A Nice Derangement of Epitaphs is by Ellis Peters, who is best known for her Cafael chronicles, but wrote much else besides, incuding the Inspector Felse mysteries, of which this is one.

Now I know Maeve Binchy is not seen as a serious author, but she actually writes quite well, tells a rattling good story, with some unforgetable characters, and does so with wit, humour and great compassion, so I bought Whitethorn Woods and Quentins for 50p each, knowing I can curl up with tales that will end on a 'feel good' note and don't require analysis or deep thought.

However, Yann Martel's Life of Pi may well call for thought and concentration. I have picked up this Booker prize-winning novel on many occasions but, to be perefectly honest, I was not attracted by the tale of a shipwrecked boy and a collection of zoo animals afloat on the ocean in a lifeboat. I have no idea what to expcet from this highly acclaimed book, but will read it to see what all the fuss was about, and because I think I should.

Meanwhile I have high expectations of Vikram Seth's Two Lives. His An Equal Music is one of the most beautifully lyrical novels I have ever read, and if Two Lives is only half as good it will be very good indeed. Like The Far Pavilions it tells of 'a love affair across a racial divide' (so says the blurb on the back) but this is the true story of Vikram Seth's great-uncle Shanti, who left India in the 1930s to study in Berlin, where he fell in love with Jewish Henny.

Finally, I selected up a copy of The Pub Quiz Book as a treat for The Man of the House, who sets and takes part in quizzes, so he can sit and acquire new knowledge while I read my novels - unless, of course, he wants to build me sime new book shelves!

*In case anyone thinks this blog has a somewhat unfinished look, you are quite right, it does -because it is a work in progress! I started creating it a while ago, to run alongide my other blog (http://chriscross53.blogspot.com/), which is a kind of mish-mash of my thoughts on life, the universe and everything. I am now trying them both back to life after a gap of several months.
Posted by Christine Harding at 4:49 pm