All the Christmases are One

Day Nine of the advent Bookfest, and it’s Dylan Thomas, with A Child’s Christmas in Wales, an amalgam of all the Christmases you’ve ever known, a magical mix of myth and reality. As he says:

“One Christmas was so much like another, in those years around the sea-town corner now and out of all sound except the distant speaking of the voices I sometimes hear a moment before sleep, that I can never remember whether it snowed for six days and six nights when I was twelve or whether it snowed for twelve days and twelve nights when I was six.”

Who hasn’t felt like that when trying to capture the memory of a Christmas past? And what about this paragraph, which couldn’t possibly be written by anyone other than Thomas:


“All the Christmases roll down toward the two-tongued sea, like a cold and headlong moon bundling down the sky that was our street; and they stop at the rim of the ice-edged fish-freezing waves, and I plunge my hands in the snow and bring out whatever I can find. In goes my hand into that wool-white bell-tongued ball of holidays resting at the rim of the carol-singing sea, and out come Mrs. Prothero and the firemen.”

There’s so much to choose from here: the snow, the presents (useful and useless), the postmen the relatives, the food, the music, the games, the cats, a fire...
But I’ll plump for his description of Christmas dinner and the afternoon, with its blend of the ordinary and the extraordinary, and the sense of anti-climax that follows when gifts have been opened and the meal eaten.

“For dinner we had turkey and blazing pudding, and after dinner the Uncles sat in front of the fire, loosened all buttons, put their large moist hands over their watch chains, groaned a little and slept. Mothers, aunts and sisters scuttled to and fro, bearing tureens. Auntie Bessie, who had already been frightened, twice, by a clock-work mouse, whimpered at the sideboard and had some elderberry wine. The dog was sick. Auntie Dosie had to have three aspirins, but Auntie Hannah, who liked port, stood in the middle of the snowbound back yard, singing like a big-bosomed thrush. I would blow up balloons to see how big they would blow up to; and, when they burst, which they all did, the Uncles jumped and rumbled. In the rich and heavy afternoon, the Uncles breathing like dolphins and the snow descending, I would sit among festoons and Chinese lanterns and nibble dates and try to make a model man-o'-war, following the Instructions for Little Engineers, and produce what might be mistaken for a sea-going tramcar.”

It’s hard to know if this is poem, prose, memoir or short story, but the label doesn’t matter because it is such a wonderful piece of writing. If you’ve never read it, please do – you’ll find it online at http://www.poemhunter.com/poem/a-child-s-christmas-in-wales/. 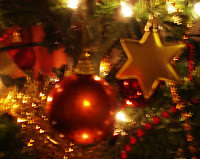 Posted by Christine Harding at 9:11 pm

Email ThisBlogThis!Share to TwitterShare to FacebookShare to Pinterest
Labels: a Child's Christmas in Wales, Dylan Thomas