I’m a vegetarian, and whilst I do cook meat for people, it takes a lot to make me feel that I’d like to eat it – but that’s exactl what Donna Leon’s Wilful Behaviour did. Now I know it may seem strange to write about food when reviewing a detective novel, but eating and drinking looms large in the life of Venetian policeman Commissario Guido Brunetti, and the food sounds so wonderful it cannot be ignored.
For example, early on in the novel Leon tells us:
In keeping with the change in season, Paola had made rissotto di zucca and into it at the last minute had tossed slivers of grated ginger, its sharp bite softened to amiability by the chunk of butter and the grated parmigiano that had chased it into the pot. The mingled tastes drove all dread of Raffi’s music from Brunetti’s mind, and the chicken breast grilled with sage and white wine that followed replaced that music with what Brunetti thought must be the sound of angels’ singing.
I just love the description of the ginger ‘softened to amiability’, and I can taste the flavours of the pumpkin risotto, and smell the chicken as it cooks. Then there’s the Braeburn, slice of Montasio, and glass of Calvados which Brunetti has to follow. It’s the exactitude of the menu that I enjoy: this is not any old apple, cheese or brandy - they are specific varieties, and excellent varieties at that. And the theme of special food continues when Brunetti tells his wife Paola ‘I will cover you in diamonds the size of walnuts, place pearls as white as truffles at your feet, pluck emeralds as large as kiwi fruit’.
Another day when Brunetti goes home for lunch he finds Paola has
... bought an entire sea bass and baked it with fresh artichokes, lemon juice and rosemary. With it she served a platter the size of an inner tube filed with tiny roast potatoes, also lightly sprinkled with rosemary. Then, to clear the palate, a salad of rucola and radicchio. They finished with baked apples.
Life is obviously different and more leisurely in Venice. Can you imagine a British policeman (or anyone else for that matter) having the time to go home for a mid-day feast like that, cooked from fresh ingredients, and followed by a glass of Grappa?
And evening meals are just as wonderful. On one occasion, after a starter of spinach and ricotta crepes, Brunetti watches
... an enormous frying pan filled with stewed rabbit with what looked to him, as she set it down in the centre of the table, like olives. “And walnuts?’ he asked, pointing to some small tan chunks that lay on the top..
In it is some celery ‘for the taste’ and the ‘usual spices’, and as he eats Brunetti tries to decide if Paola has added bay leaf as well as rosemary. In addition there is a ‘platter of small roasted potatoes and zucchini cooked with thin slices of almonds’ and a sip of plum liquor after the meal.
Food and drink are just as important to other characters. A doctor recommends linden tea and honey to help a murder victim’s flatmate recover from shock, and while talking to the police the girl remembers how the dead student sometimes brought home cookies, or cake with almonds in it.
This almost obsessive detail about food and drink is present in all the Brunetti books I’ve read, and is very much part of the Commissario’s character. I adore Brunetti because he’s so reassuringly normal and human. Unlike many fictional detectives he’s not a flawed human being battling his own deep-set psychological problems: he’s well read, intelligent, sensitive, loves his wife and children, is loyal to his friends, and enjoys the good things of life, not just fine food and drink, but flowers, beautiful paintings, and a sunny day. His son and daughter bicker about silly things, while he and Paola disagree on many issues, but obviously love each other. He is, above all, an honourable man, who sticks to his principles and is not afraid to stand up for what he believes is right – not always easy in a Venice where corruption seems to be commonplace.
Views of the city are part of the charm of the books. Brunetti travels the canals by vaporetto and walks through streets and squares, giving us glimpses of churches, bridges, the Arsenale, a stone relief of a turbaned merchant leading his camel. 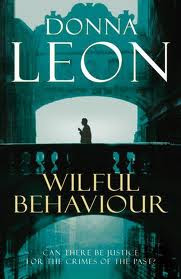 Where, you may ask, is the crime in all this? Well, the crime is there, as much a part of Brunetti’s life as his family and the city itself. This particular novel begins when a student of Brunetti’s wife asks if a person who has died can be pardoned for something they were put on trial for. Brunetti has little to go on, but things take a sinister turn when the girl is stabbed to death, and his investigations reveal a web of deceit and lies stretching back to Italy’s Fascist past, looted works of art, and an old love affair.
Along the way he ponders the nature of truth, beauty and honour, reflects on human nature, and considers the reasons for crime and killing. Now I realise I’ve said very little about his methods, or his relationships with his colleagues and contacts, but that provides me with plenty of scope to write about the wonderful Commissario Guido Brunetti on another occasion. And in the meantime, if you’ve never read one of these books please, please, give them a try – they really are worth it.

Posted by Christine Harding at 10:53 am