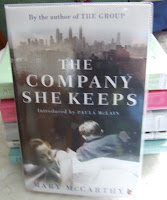 O frabjous day! Callooh! Callay!  I've been to the library,  where the machine chine was not dispensing receipts with the date of return (which I always lose and consequently forget when books are due back), so a real  librarian date stamped my books, as in the olden days. Oh joy!


Saturday is Library Day so, despite my intention not to bring more books into the house until I’ve whittled the TBR pile down a little, I have now borrowed eight books, including a couple of renewals – but as I returned some books, I’m not actually adding to the number of books, I’m just maintaining the overall number at a fairly even keel.

Anyway, since I posted a list of charity shop finds, it’s only fair that I should write about my library loot.

The Company She Keeps, by Mary McCarthy: I think this one was muddled up in the pile for charity shop finds, which may be why I haven’t read it yet and it had to be renewed. ‘The Group’ is one of my all-time favourite novels, about friendship and women’s lives, and ‘A Catholic Girlhood’ is a wonderful account of the author’s upbringing and her incredibly eccentric family, so I have high hopes of enjoying this.  Her first novel, it’s loosely based on McCarthy’s own life and, according to the blurb on the back, ‘follows Margaret Sargent, a young bohemian intellectual, through her experiences and lost loves in a time of coming war’.

The Lonely Londoners, by Sam Selvon is ‘a vernacular comedy of pathos’, whatever that may mean (Penguin should know better than to indulge in language like this, but blurb writers speak a different language to the rest of us). It seems to be written in a kind of patois, and takes place in 1950s London, as a newly arrived West Indian meets homesick Moses Aloetta and tries to carve out a new life in a new land. I’ve never come across this author, or read much which covers the period and setting (with the exception of Andrea Levy’s Small Island), and I thought this sounded interesting.

Midsummer Night in the Workhouse, by Diana Athill is a collection of short stories, which I picked up because it’s a literary form I’ve been exploring recently – and I wanted to sample some of Athill’s work, so this particular book fitted the bill on both counts.  Plus it’s Persephone, with beautiful endpapers, and it’s printed on such nice quality paper, making it a pleasure to read, and it’s a lovely weight to hold. This one more than makes up for the horrid edition of Rebecca West's 'The Fountain Overflows'.

Mrs Tim of the Regiment, by DE Stevenson: Somewhere I came across a reference to the author and today, lo and behold, there was one of her books, on a shelf, in the very small classics section, so I snapped it up, but have absolutely no idea what to expect. The blurb on the back (which, since this is Bloomsbury, I am inclined to take more seriously than usual) says Hester Christie, wife of Army officer Tim Christie (hence Mrs Tim), is left alone for long periods of time, so keeps a diary of family events, including a move to Scotland, and pursuit by a dashing admirer.

The Fallen Kings, by Cynthia Harrod-Eagles is part of The Morland Dynasty, recommended by Elaine at Random Scribblings (and various other bloggers), and I should probably start with one of the first books in the series, from a much earlier period, rather than jumping straight into the First World War. However, this was the only one I could find, and I have to make a start somewhere, so I’ll just have to work backwards, like Merlin! So many people have told me how good Harrod-Eagles is, so I hope I won't be disappointed.

Mrs Harris Goes To Paris, by Paul Gallico is published by Bloomsbury and comes in a very cheerful, very pink cover which made it stand out from the surrounding volumes so, since I am going to Paris with my mother in a couple of months, it seemed a particularly apt choice. The book also includes Mrs Harris Goes to New York, and I have a feeling that I may have read either or both these tales in the dim and distant past. If I have, the fact that I can’t remember may not augur well for my appreciation...
Red Strangers, by Elspeth Huxley, shows the effect of European colonialism on Kikuyu tribesmen Matu and Muthengi as their traditional way of life and their Kenyan homeland are changed for ever. It covers four generations and, unusually for a European author perhaps, looks at events from the African perspective.   I couldn’t resist this, because ‘The Flame Trees of Thika’ is one of the books I’ve known and loved since childhood. covering similar ground to 'Out of of Africa'. Huxley spent much of her younger days in Africa, travelled widely as an adult, and cared deeply about the continent and its people. Whether this book is as good as Flame Trees remains to be seen.
Henrietta’s War, News From The Home Front 1939-1942, by Joyce Dennys is another unknown. I’ve never heard of the title or the author, but it has a fabulous cover (The Bloomsbury Group again) and is illustrated with the most gorgeous black and white line drawings, neither of which are necessarily good reasons for selecting a book, but it looks such fun. I have sneaked a peek at the pages, and it looks as if it will be very humorous, and I need something to cheer me up, since I have been suffering from a cold and sore throat for the last few days, and feel very sorry for myself. As far as I can gather, the book is written as a series of letters from Henrietta to Robert, her Childhood’s Friend, and was originally published in the Sketch magazine during the war. At any rate, even though this appears last on my list, I intend to read it first, and to try and find out a bit more about the author. 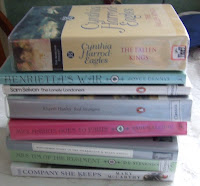 Posted by Christine Harding at 6:21 pm