A Poem for Spring

Well, April is almost over, and during the last few days it really does feel as Spring is finally here, weeks after its usual arrival. It's definitely warmer than it has been, flowers are blooming everywhere, and leaves on trees and bushes have put on an incredible burst of growth, as if they are trying to make up for lost time. There are masses of butterflies and bees around, and birds are obviously nesting.

So in honour of Spring, today's post is is one of my favourite poems: Home Thoughts, From Abroad, by Robert Browning. I'd always assumed he wrote it while he was living in Italy following his marriage to Elizabeth Barrett, but apparently it was written while he was visiting England in 1845.

And here's a photo of blossom I took in the hedge alongside the canal. I'm not sure what it is, but I'm positive it's not pear I. think it may be some kind of philadelphus, but whatever it is, t is very delicate, and very spring-like. 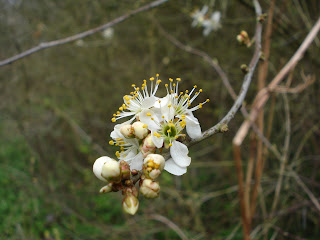 O, to be in England


Now that April 's there,


And whoever wakes in England
Sees, some morning, unaware,
That the lowest boughs and the brushwood sheaf
Round the elm-tree bole are in tiny leaf,
While the chaffinch sings on the orchard bough
In England—now!

And after April, when May follows,


And the whitethroat builds, and all the swallows!
Hark, where my blossom'd pear-tree in the hedge
Leans to the field and scatters on the clover
Blossoms and dewdrops—at the bent spray's edge—
That 's the wise thrush; he sings each song twice over,
Lest you should think he never could recapture
The first fine careless rapture!
And though the fields look rough with hoary dew,
All will be gay when noontide wakes anew
The buttercups, the little children's dower
—Far brighter than this gaudy melon-flower!

Posted by Christine Harding at 9:37 pm