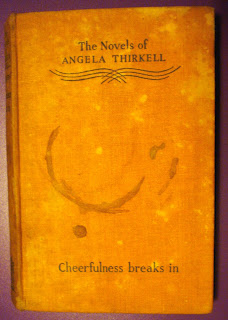 Oh dear, over the last few months I’ve missed writing posts when I’ve been at my mother’s, and when we’ve been away, and I don’t seem to be able to get back into the swing of things at all. I’ve even read less than normal, which is unusual for me,  but now I’m taking stock of things, trying to get organised and catch up, and aiming to try and write ahead of myself, if that makes sense. Hopefully, if I have posts in hand, I can schedule them to appear if I have to dash off to Mum at short notice.

So, after a bit of an absence, here is a review of sorts on Angela Thirkell’s Cheerfulness Breaks In, which I enjoyed every bit as much as ‘High Rising’, although I gather some readers don’t regard it as one of her best novels.

Here we meet some old friends, like independent novelist Mrs Morland, her friend Amy Birkett, and Amy’s husband, the headmaster of exclusive Southbridge School. But there are a host of new and equally memorable characters. And whilst the humour is still there, the tone is slightly darker, and there’s an underlying sadness, for ‘Cheerfulness Breaks In’ opens in the late summer of 1939, during the last few weeks of peace, before the start of the war, when well-heeled, middle-class families were still leading their cosy, comfortable lives, not knowing just how much things would change during the coming conflict. To start with, I thought Thirkell’s characters are all blissfully unaware of what lies ahead, but on reflection I think they know – after all, most of them are old enough to remember the First World War, and they’re not stupid. However, the only way they can cope with that knowledge is through a kind of under-stated British jokiness, and pretending to close their eyes to what is happening.

As the months pass we see how small village communities are affected by the early stages of WW2. Southbridge, an acclaimed public school, must share space with pupils from London’s Hosiers’ Boys Foundation School, its left-wing head and his serious-minded staff. Elsewhere, residents take in evacuees from three city primary schools, and a nursery is moved in with a family in one of the big houses. And there are other newcomers in addition to the evacuees – European refugees who have fled Europe and the threat of Nazism and are regarded as strange and exotic, even more difficult to understand than Londoners.

There are bound to be tensions between locals and incomers, but the rivalry between the visiors comes as a surprise. Despite their differences, the children settle down and the adults mostly learn to get along with each other, but there are practical problems to be dealt with, like the infestations of headlice which so shock the villagers, and any parent who has ever tried to get rid of these horrid little creatures will have every sympathy with their efforts, which seem doomed to failure.

Women hold weekly sewing parties, where they hand-stitch clothes to be sewn for evacuee children (and very drab and uninspiring they are too, but there obviously wasn’t much in the way of choice when it came to materials), and a canteen is set up where many of the children are fed each lunch time with good, wholesome food, which sounds as uninspiring as the clothes.

Gas masks are distributed, blackouts are installed in all buildings, there is talk of rationing as shortages begin to bite, and girls who have are between school and marriage become volunteer nurses at the local hospital, where patients have been sent home in readiness for war casualties.

The book is very much of its time. Foreigners are viewed with suspicion, servants are grumpy, and women are the second sex, subservient to their menfolk, expected to look good, but not to be too clever – or, if they are, not to show it. All good feminists will feel their hackles rise, but appearances are deceptive and some of these women are tougher – and more astute -than they look, and have subtle ways of getting their own way and dealing with others.

Thirkell has a nice line in social satire, and the book is very funny: the account of dim but beautiful Rose Birkett’s wedding is a joy to read, as is the description of a Christmas party held for the young evacuees.

I suppose the book could be described as a comedy of manners, but it’s the characters and their relationships with each other that make the novel so enjoyable, and the way they focus on the small things in life, rather than the dramatic world events going on around them.

It reminded me a lot of my mother’s stories about the war, when a Catholic girls’ school moved to the area where she lived, and I thought it was interesting to compare Thirkell’s story with others about the same period, like ‘Henrietta’s War’, by Joyce Dennis, EM Delafeld’s ‘The Provincial Lady in Wartime’, or Mollie Panter Downe’s ‘Good Evening, Mrs Craven’.

Posted by Christine Harding at 7:28 am