A 'Spendthrift's Spreading' of Marmalade! 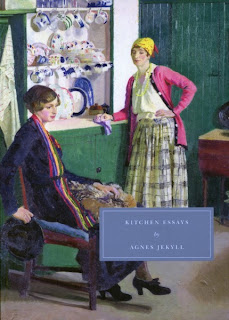 Yay! The Great British Bake-Off is back, and promises to be every bit as good as the last series... And the One before that... And the one before that. Consequently, I am baking mode, and what better time to take a look at a cookbook. So here are my thoughts on a Persephone kitchen classic, Kitchen Essays, by Agnes Jekyll. And, before you ask, yes, she was related to gardener Gertrude Jekyll: her husband was Gertrude’s brother, and they lived quite close to each other, near Godalming, in Surrey. Agnes, who was made a Dame of the British Empire in recognition of her work for ‘good causes’, was a well known society hostess. Apparently, she was famous for the wit and wisdom of her imaginative housekeeping! I’m not sure if that’s an attribute which should be applauded, and it’s probably a whole lot easier if you have servants (which she did). Anyway, she wrote a cookery column for The Times, and her pieces were gathered together as a book in 1922, and she really is a very good writer, with the most original turn of phrase when it comes to describing food.

Before I go any further, I should warn you, this book is not intended for vegetarians (like myself) or those of a faint-hearted disposition. Even the staunchest carnivore will blanch and reach for the cooking sherry when reading the instructions for Consommé Fausse Tortue. I have no idea what the English translation of this dish is (my failed ‘O’ level French didn’t equip me to cope with the demands of French gastronomy) but it involves half a calf’s head.  And a lot of stewing and simmering (especially on the part of the cook I imagine). And the cooking sherry...

Actually, Jekyll does include a chapter on ‘meatless meals’, but this is ‘Lenten fare’ making use of fish and veal stock. However, there is a recipe for Oeufs Mollets in Sauce Fromage (soft boiled eggs in cheese sauce – even I can cope with that) which is jolly nice, especially if you tweak it around a bit. I like to add a bit of zing to this kind of dish with some English mustard and pinch of cayenne.

It’s not a recipe book in the conventional sense: Jekyll writes about food, including her
memories and opinions, as well as literary quotes, and reflections on life in general. As far as the food goes, while some of her offerings still hold good today, many are not to modern tastes. In addition quantities, cooking times and temperatures are not nearly as precise as those in modern cookbooks and, of course, there are no pictures. But none of that matters, because Jekyll’s descriptions are so wonderful. For example, there’s her version of rice pudding (re-baptized Dundee) where she tells us:

Boil sufficient rice in milk until cooked rather firm, sweeten, and fill in therewith  a fireproof glass or nice-looking pie-dish, adding a spendthrift’s spreading of juicy home-made marmalade...

Don’t you just love that ‘spendthrift’s spreading’? It gives you such a clear idea of what you should be doing. And what about her recipe for orange jumbles which concludes by saying:

They should be the size of teacup rims, and should curl their crisp edges, faintly pink as the underneath of a young mushroom.

Anyone with an old-fashioned bone china tea service will know exactly how big these dainty morsels should be, and if you’ve ever looked at the gills of a young mushroom, when it’s just beyond that button stage and beginning to unfurl, they are indeed the faintest of pinks, so pale it’s almost not a pink at all. This recipe sounds so nice I was going to try it, but I’ve only got one orange, and the list of ingredients calls for two, so I got up early and baked a Victoria sponge instead, inspired by GBBO. Orange jumbles must wait for another day. 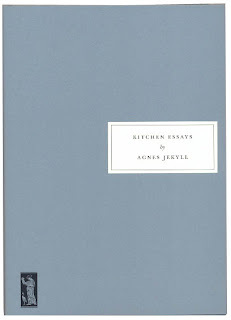 I have to admit that I didn’t want to sample many of Jekyll’s recipes, but I really enjoyed the book, and loved the glimpse it gave of a long-gone way of life. Here is a world of kitchen maids, cooks, shooting-parties, weekend guests, luncheons, and motor excursions. In fact, the essay on motor excursions is, to coin a phrase, an absolute hoot. No motorway service stations in those days! Instead travellers need a hay-box (for chunky hot soup), a Thermos full of mulled Claret (no breath tests either!), another full of coffee, as well as camp stools, a waterproof rug and furs! Then there’s the food, all home-made (by the cook, not the lady of the house). An ideal meal on the move included stuffed salmon rolls, a Winter Cake, ‘black and sticky with treacle, enlivened by whole white almonds’, and a ‘little selection’ of desserts and sweets.

There are 35 chapters, covering a variety of topics, including advice for the too thin (and the too fat) and tray food for invalids. There are sections on food for men, food for travellers, Food for the Punctual and the Unpunctual, and A Little Dinner Before the Play (followed by A Little Supper After the Play, which I’m delighted to say, involved cold dishes, or things which could be kept hot – the poor cook was not expected to wait up).  These days, of course, people are more likely to get a take-away on their way back from a night out, and a jolly good thing too if you ask me. Much less trouble!

I particularly liked the two chapters on breakfasts. Who would have imagined there was so much to say about this meal? Not me, that’s for sure! According to Jekyll:

Breakfast is the most difficult meal of the day, whether from its social or its culinary aspect.

A cordonbleu cannot be at her best very early in the day; and as for the chef, he will unblushingly delegate his duties to his understudy. It is wise, therefore, to aim at implicity, but, within its limits, to strive after perfection.
Above all things, she says, breakfast must be hot. No cornflakes for her then. Or left-over pizza scavenged from the fridge. She recommends use of a long metal food-warmer with spirit lamps known, so she assures, as the ‘Sluggard’s Delight’ upon which porridge, coffee and hot dishes can be kept palatable. In addition she urges us to:

Insist on a hot-water kettle of real efficiency, on a tea-caddy which will contain a delicate as well as a pungent blend of tea, more than one tea-pot, and a small saucepan over a spirit lamp for boiling eggs, with an hour-glass standing sentry nearby.

Then there’s the ‘fireproof jug of ample proportions’ with a ventilated top to keep the milk hot without boiling over, and toast, which demands ‘a glowing grate, a handy toasting fork, and a patient watcher’. There are recipes for brioche, frothy coffee, marmalade and home-cooked tongue, and all sorts of other suggestions, including this:

Try bananas, skinned and halved across, and again lengthwise, and served frizzling from a buttered sauté pan on fried toast, with perhaps a dash of orange juice added, an excellent and wholesome food for the young.

On that note I shall leave you. I’m exhausted just reading about the breakfast preparations. I need a rest. And something to eat...

Posted by Christine Harding at 11:42 am