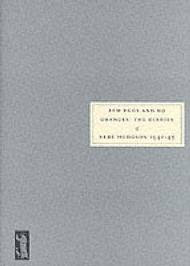 Last night was one of those when I woke up and couldn’t get back to sleep, so I went downstairs, made a cup of tea, and carried on reading Few Eggs And No Oranges, the wartime diaries of Vere Hodgson, and thought how odd that I should be sitting there, sleepless for no particular reason, while reading her account of nights broken by air raid warnings, the sound of planes overhead, and the noise of bombs exploding around her. And, since tea was rationed, I guess there wasn't always enough for a comforting cuppa in the middle of the night!

I’ve only read the entries for the first few months, but I’m loving it so far. As with all good diaries, the juxtaposition of major national and international events with the mundane and commonplace makes for fascinating – and compelling – reading. And Hodgson makes no effort to marshal her thoughts in a coherent fashion. Details of a raid are followed by accounts of a day at the office, and then by more about the bombs, while gossip about friends and family is interspersed with serious news items about Government ministers, shortages, or updates from battle fronts.

Her portrayal of politicians is fascinating. Figures that I only know from old newsreel clips and newspaper cuttings spring to life.  Chamberlain is every bit as dull, boring and uninspiring as I expected, and Churchill is every bit as charismatic. But who would have thought de Gaulle was such a sensational orator, speaking out against the ‘dishonourable’ Petain Government and rallying the French Resistance. I remember him as an old man, poker-faced, with a big nose, much lampooned by cartoonists in the British press for his unbending stance on us joining Europe, and I find it difficult to think of him ever being young, let alone being so passionate and brave about his country.

The diary starts on Tuesday, 25th June, 1940, and Hodgson leaps straight in – short, sweet, and very much to the point. “Last night, at about 1am, we had the first air raid of the war on London,” she tells us. Her room is opposite the police station, so she gets the ‘full benefit’ of the sirens.

It made me leap out of bed half way across the room. I shook all over, but managed to get into my dressing-gown and slippers, put my watch in my pocket, clutch my torch and gas-mask, and get downstairs first. 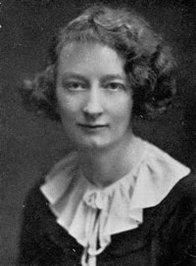 Her landlady is ‘rearing’ mattresses against the door (for protection, I suppose). Everyone shares sweets, chat and jokes, before returning to bed because all is quiet – only to be woken again when the All Clear sounds. For some time life remains quiet, despite the Warnings, but gradually things hot up, and nights – and days – are disturbed by sirens, planes, falling bombs, and the bright blaze of burning buildings. I know about the war from history books but I was thoroughly shaken by the scale of the bombing, not just on London, but elsewhere in the country as well. And the noise was indescribable. The words hellish and nightmare don’t even begin to give a flavour of what life was like during the Blitz. And all the time people were on tenterhooks waiting to hear if friends and relatives were safe, and anxious about what British Troops were doing. Many people, including Hodgson, seem to have taken a personal interest in the fate of ‘Our Boys’, but news was often slow filtering through to the Home Front.

Yet through it all she remains cheerful and alert. She’s curious about the war and its impact on people’s lives, and is very observant, sympathetic, and yet slightly detached, which makes her an excellent recorder of events. Her voice comes across loud and clear over the years. Friends, apparently, described her as brisk, and so she is. She’s intelligent, capable, has a keen sense of right and wrong and is always willing to help others (I’m sure she would have been a good person to have around in a crisis). She’s also got a sense of humour, and is game for anything, attending lectures and courses learning how to deal with bombs, gas attacks, fires, injuries and all kinds of terrors. On one occasion she’s left bruised and battered after being dragged down a flight of stairs whilst acting as the ‘victim’ who must be rescued.

There are details about rationing, queues and food shortages (eggs and oranges were always 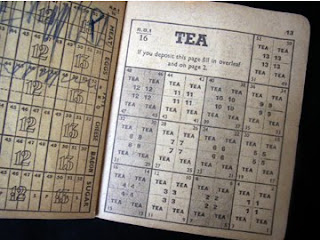 in short supply, hence the title of the book), and on July 8 Hodgson notes: “We listened to the news, and heard the bombshell about tea! Two ounces per head, per week!” However, she adds, it will do for her because she doesn’t like her tea strong. I was reminded of George Orwell who, unlike Hodgson, did like his tea strong, and wrote a very funny essay on the subject of ‘A nice Cup of Tea’ which appeared in the Daily Express in 1946 (tea rationing didn’t come to an end until 1952, although by then the weekly amount had risen to 3oz). According to him the 2oz ration (this was loose tea remember , no tea bags then!) made around 20 cups, which is only two or three a day – not a lot  when you think about it. No wonder housewives eked it by following the Minister of Food's advice to use ‘one spoonful for each person and none for the pot’, and eked out their meagre supply by reusing the dregs.

One of the things which surprised me was the extent to which Hodgson travels around: she meanders around London to look at bomb damage, and makes regular trips to Birmingham to see her mother and sister, as well as visiting other friends and relatives. Travel is disrupted, but trains, buses and tubes still run, even though there are often lengthy delays. Thinking about it, I am not sure why I was so surprised, because my mother has told me how the parents of evacuees billeted with her family would catch the train out from Waterloo and spend Sundays with them. And later on in the conflict Mum used to travel into town with the girls to visit their homes.

There is so much packed into these diary entries that it’s taking me a while to read, and I keep getting side-tracked and going off to look things up, to hunt out other books from the period (has anyone got any recommendations?) and to ring my mother for more of her wartime memories. I’m only at the end of 1940, and these first six months have taken me on so many detours – Anderson Shelters, rationing in general, tea rationing (which led to a further exploration on the history of tea), General de Gaulle and the French Resistance, the Ministry of Food, wartime recipes, the Fall of France, the Occupation of Jersey...  I would love a street map of wartime London, to locate the places mentioned. As you can see, the list of Things I Need to Know is likely to get even longer, and at this rate it may be quite some time before I finish reading!
Posted by Christine Harding at 8:17 am