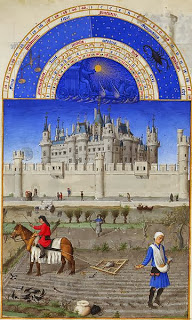 Well, this year seems to have gone very quickly, and we’re into October already, so here’s a picture from the 15th century Book of Hours known as Les Très Riches Heures du Duc de Berry, showing people ploughing and sowing, because I love the rich colours, and the detail. Ahead there's Hallowe’en to look forward to, a visit from Elder Daughter and her Boyfriend and, of course, the clocks go back – and what better way to spend a dark, winter night than to curl up in a comfy chair with a good book!

So I’m sitting here writing out a Book List for the next few weeks, and looking back at September. The Brickbat Award for the Worst Read of the month went to Mr Petre, by Hilaire Belloc, while the Bouquet for Best Read had to be Stevie Smith’s Novel on Yellow Paper, and I still think this is should be re-issued so lots more people can enjoy it.

On the whole I didn’t do too badly with my September Book Stack, but it went a bit awry towards the end. I didn’t quite finish Amy Leach’s  Things That Are, Encounters with Plants, Stars and Animals, but I’ve read it all now, and hope to post up a review on Friday. And I didn’t quite complete Hunt the Slipper by Violet Trefusis, but I’m almost there, and so far I think it’s fantastic. So that only leaves one book that I have yet to make a start on:  The Edwardians, by Vita Sackville-West. 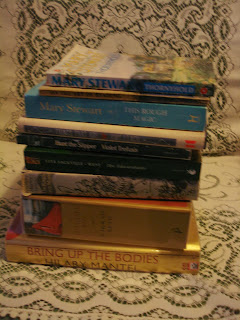 But I did read my prize copy of Rosamunde Pilcher’s Carousel while travelling to London and back to meet my Younger Daughter, and very enjoyable it was. Not the greatest literature in the world, but easy, undemanding reading. And I made a start on Vikram Seth’s A Suitable Boy, having plucked up courage and decided to join the team read over at dovegreyreader. Which all goes to show that lists, like resolutions, are made to be ignored!

Sitting waiting to be opened is Bring Up The Bodies, by Hilary Mantel, which I spotted in the library and pounced on before anyone else could beat me to it – I’ve been waiting ages and ages for this and, having read and loved Wolf Hall, I can’t wait to begin and see how Thomas Cromwell is weathering the storm as Henry falls out of love with Anne Boleyn and becomes even more obsessed with the need for a legitimate male heir. This is another chunkster, and it’s a good job I can tackle A Suitable Boy in bite-sized pieces, because I am not sure I would want to read two ‘doorstep’ books together!

Still in historic mode, I picked up a second-hand edition of Rosemary Hawley Jarman’s novel The King’s Grey Mare, about Elizabeth Woodville, who is probably better known these days as Philippa Gregory’s White Queen. I must admit I gave up on the TV adaptation after the first episode, and I wasn’t overly impressed with Gregory’s book, but I’m curious to see how this compares. 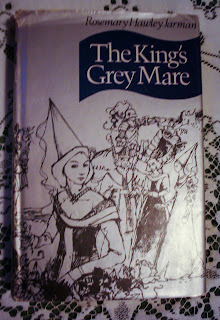 And there’s the Arthur Quiller-Couch’s essays On Reading, kindly sent by Pam at Travellin' Penguin, and for light relief I’ve got two Mary Stewart novels on the TBR pile, Thornyhold, and This Rough Magic.

In addition I’m still working myway  through a selection of Short Stories for Sundays, investigating my favourite Gardening books, and following Vere Hodgson as the Second World War continues, food shortages get worse, and the news from Europe looks bleaker than ever. So you can see, I’ve got plenty to keep me busy – in fact, I’m sure the Book Stack will keep me going well beyond the end of October!
Posted by Christine Harding at 7:25 pm

Email ThisBlogThis!Share to TwitterShare to FacebookShare to Pinterest
Labels: books to be read, October