Singing - with a Girdle in her Hand!

October has been a funny sort of month, when I don’t seem to have got into my reading or writing stride at all. I started well, but I was at my Mother’s for a bit earlier in the month, and the Man of the House and I have just been on a last-minute break down to the south coast, where I discovered that despite spending what seems like a lifetime in the Midlands, I am still a southerner at heart. Anything south of London seems like home, even if it’s not my native Surrey. The very air seems different somehow, and don’t let me start on how much I love the accents, or I shall risk offending hordes of people! However nice it is to go away, it’s always lovely to return home, but it takes me ages to get into routine again, and my October reading list has gone totally to pot, and there have been longish gaps between posts, so now I’ll make up for lost time with a clump of them all together! 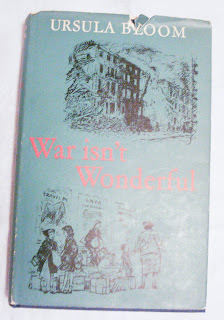 I have to admit I am behind-hand with Vere Hodgson’s Few Eggs and No Oranges (it’s much too chunky to take travelling) but I’ve been reading War isn’t Wonderful, the wartime memoirs of novelist, journalist and broadcaster Ursula Bloom, which is much shorter, but just as fascinating. Her diaries are more reflective and introspective than Hodgson’s, and she’s not as detailed or as curious or brave - you wouldn’t catch her venturing into unknown territory to investigate the extent of bomb damage. But she’s very honest, as all good diarists should be, presenting a picture of herself warts and all, as it were.  She suffered from crippling headaches, which lasted for days at a time, and the pain was so excruciating she was often completely immobilised and unable to do anything. She sought advice from various doctors, who diagnosed migraine, but the treatments brought no relief, and it was not until the 1950s that she was found to be suffering from arterial trouble, and underwent an operation which restored her health. But during the war she says:

I was horribly conscious of my own inability to do anything that would really help the war, and, goodness, how much I wanted to do something! This feeling of helplessness possessed me. It was destroying to be aware of a physical weakness, a driving pain which held me back when every single person was wanted so much.

She makes no secret of the fact that she sat out much of the war in the safety of country hotels, unable to cope with her mystery illness, which was exacerbated by the stresses and strains of life in London – but she and her naval officer husband had always lived in hotels, and considered this quite normal. 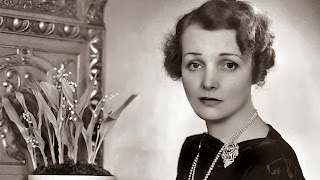 However, they did have a Chelsea flat, which suffered a direct hit, and her account of what happened is so horrendous you cannot blame her for wanting to escape from the city, though it was a luxury thousands of other Blitz victims could only dream of. Describing the events of the raid, on April 16th, 1941, she begins by telling us about the strange beauty of the scene in the sky:

… we saw another awful raid was coming, for the pre-attack planes were overhead, dropping the very pretty chandeliers of coloured lights which lit up everything and showed the way to the followers-up. Their beauty was a snare and a delusion, but they quivered over London in radiant colours, and looking at them they seemed to represent an unreal Christmas night in a highly decorated sky.

Isn’t that a wonderful piece of writing? It seems to bring the view to life, and makes me feel I could paint it, if I could paint, which I can’t. When the bombs start falling Bloom and her husband Robbie lie on the floor of the corridor in the flat, away from the broken glass, but their terrified maid refuses to leave her room.

In the next three hours sixteen land mines fell and all the bombs in the world. I do not think I can ever forget the horror of it, the frantic shock of not knowing what to do, or where to go, and almost wanting to be hit to get it over.

When they are hit she has fallen asleep, curled up on the floor outside the bedroom door. Here are some snippets from her diary as she recounts what happened (the dots indicate missing text):

… I tasted the acrid taste of explosive in my mouth, and was brought round by the raucous sound of people screaming. Beside me in the hall, where the bathroom door had been before, was an enormous jagged hole …

Through this jagged gap, with a broken wall beyond it, I saw Cranmer Court across the back courtyard and it was on fire. The fire brigades had already arrived and had run up their ladders and were bringing people down. You would have thought that the fact that they had had time to get there would have warned me that I had been unconscious for some considerable time, but that apparently did not register.

… the blanket over me had become intolerable heavy, and I realized after a moment that it wasn’t the blanket all but the bathroom door, and most of the bath itself lying about me. Strangely enough, I had not suffered a single scratch.

Sadly, Rosa the maid was so traumatised she was sent to a convent to be cared for, and we never learn what happens to her, but Bloom and her husband Robbie were unhurt, although she tells us that the following morning as she walked up the street to take a bath at a relative’s home:
… I suddenly realized that I wasn’t normal. I wore a siren suit and carried my clothes under one arm, whilst with the other hand I swung a girdle by a suspender. I was singing. I imagine I looked dotty. 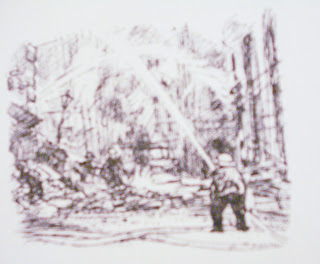 Like Hodgson, Bloom is always delighted by small, unexpected pleasures – she too finds that the sight of a daffodil flowering in the park lifts her spirits. And the lack of eggs and oranges (or, come to that, of any other fresh fruit) is a constant refrain with both women. Actually, Bloom did better than many people when it came to food, because more was available when she was in the country and even in London she was able, on occasions, to get extra items from her regular shopkeepers, and from ‘the Hen’, who is so much my idea of a cheery Cockney char, that I almost wondered if she really did exist.

And Bloom mentions other shortages that I hadn’t thought about before. Shoes for example, disappear from the shops as soon as they arrive, and by the end of the war she cannot walk on a gravel path because the soles of her shoes let it in! In fact, as far as she is concerned, the end of the war seems to be an anti-climax. She writes:

There had been none of the eager rejoicing of 1918 when we really believed that war had been removed for ever. Now we never thought that for a moment. Perhaps this was the most wretched part of a victory that was ice-cold. There is a limit to human endurance and we had had too much; we were not the same people who had gone out to fight. Perhaps the best of us had gone. 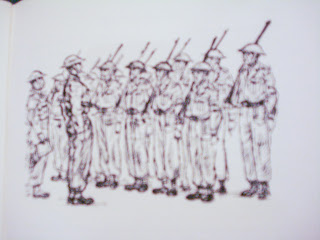 I think Bloom’s response to the war was very much determined by her experiences during the First World War, and her sense of horror that only two decades after the ‘war to end all wars’ had ended, another generation of doomed young men went off to be slaughtered in another conflict, and that there would be other wars in the future, when other young men would lose their lives. The constant pain she suffered from her debilitating headaches must also have affected her perception of the world.

She realises that it’s not just lives which have been lost, but a whole way of life; that things have changed, and will never be the same again, so she mourns the loss of old values and beliefs, as well as the deaths. She is more despondent and fearful about the war and its outcome, and about what the future will bring than Vere Hodgson, However, she’s really not doomy and gloomy – she has a wry, self-deprecating sense of humour, and is well aware of her own strengths and weaknesses.

Overall, I must confess I didn’t warm to her in the way I did to Vere Hodgson, and I’m not sure I would have liked her as a person – I suspect I would have found rather snobbish and patronising, and she certainly brought my socialist principles to the fore! There were times when I wanted to give her a good shake, and say ‘for Heaven’s sake woman, pull yourself together – on the whole you’re very lucky because you’re leading such a nice cushioned existence and are in a much better position than most people’.

But I was gripped by her marvellous descriptions of the Blitz, of the hellish scenes in Tube shelters, of being caught in London’s streets during a bombing raid, and by the way she brings small unimportant things to life – those thin soled shoes for example, and a much-anticipated egg, which shot off its spoon during a raid and was never seen again.

*The illustrations from the book which, sadly, have not reproduced at all well here, are by Douglas Hall.
Posted by Christine Harding at 1:00 am