One grey morning the first snow began to fall in the Valley of the Moomins. It fell softly and quietly, and in a few hours everything was white.

Moomintroll stood on his doorstep and watched the world nestle beneath its winter blanket. ‘Tonight,’ he thought, ‘We shall settle down for our long winter’s sleep.’ (All Moomintrolls go to sleep about November. This is a good idea, too, if you don’t like the cold and the log winter darkness. 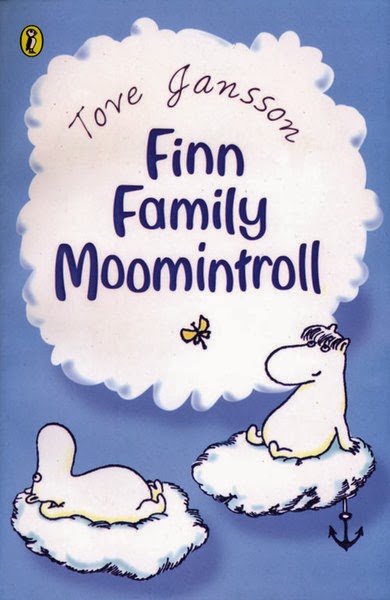 Then family, and all their friends and acquaintances, prepare for winter. They eat a meal of pine-needles, which don’t taste very nice, but you need a tummy full of pine-needles if you’re going to sleep through winter, and they clean their teeth, and the doors and shutters are closed, and a mosquito net hung over the chandelier so it won’t get dusty, and off they all go to bed.

Isn’t that just enchanting? And don’t you sometimes think it would be so nice to dream through the worst weather, and wake in the spring when everything is new and fresh and bursting with energy? The quote above, for those who don’t know, is the start of Finn Family Moomintroll, the classic children’s tale by Finnish writer Tove Jansson. Given my love of children’s books, and the fact that I adore Jansson’s other work, I cannot understand why the Moomins have passed me by – until now! And there are other Moomin stories which I simply must read as well.

The best children’s books always seem to blend the extraordinary and the ordinary in such a seamless way that you believe wholeheartedly in what is happening, however strange the characters and story may be, and that’s very much the case with Finn Family Moomintroll. It’s a kind of fairy tale, where peculiar little creatures have odd adventures, but always behave in a way we recognise. And it’s the little, homely touches, like the tooth cleaning, that bring everything to life (it’s the same with The Hobbit, where poor Bilbo, setting off with the Dwarves on the adventure of a lifetime, forgets his pocket handkerchief, which makes everything seem so normal somehow).

Anyway, in Jansson’s book the Moomins, and all their friends and acquaintances, are woken in the spring by the call of the first cuckoo (rather hoarse, because it’s still early in the spring, as well as being in the morning - four o’clock to be precise). As the world wakes around them, Moomintroll, Snufkin and Sniff climb a mountain, and at the top they find a tall, black, hat (like a top hat), so they take it home, intending to give it to Moominpappa, but it’s too big for him, so they turn it upside down and use it as a waste-paper basket. However, it’s the Hobgoblin’s Hat, and if something lies long enough in the Hobgoblin’s Hat it begins to change into something quite different…
Eggshells turn into soft, woolly, white clouds, like little pillows, which Moomintroll and his friends ride around on. Seawater is transformed into raspberry juice; words in a Dictionary of Outlandish Words placed on top of the hat come crawling out of the pages, and the fearsome Ant-lion, lured into it by a trick, becomes a sad little hedgehog.

But there are sinister aspects to the magic. When Moomintroll hides beneath the hat he is turned into a very strange animal indeed:

None of his friends recognise him but, thinking it is a new game, he plays along, until he finally understands what has happened. By that stage, not unnaturally, he is very frightened, and very upset, so they call Moominmamma, who knows him, and he is changed back into his true self, and she tells him: “You see, I shall always know you whatever happens.” It’s one of the moments when the book stops being ‘just’ a children’s story, and steps up a gear. There are echoes here of old folk tales, like the Frog Prince, or Beauty and the Beast, and it made me think about the nature of identity, and how appearances can be deceptive, and whether anyone really does know anyone else – and whether we even know ourselves.
There’s a similar moment when the Hemulen is in despair because his stamp collection is complete – there isn’t a stamp or an error that he hasn’t collected, and he doesn’t know what to do. But Moomintroll understands. “You aren’t a collector any more, you’re only an owner, and that isn’t nearly so much fun,” he says. Owning things carries its own responsibilities, but the Hemulen has lost his sense of purpose, and the enjoyment and enthusiasm he had previously. And that set me off thinking about the differences between owning things, and collecting them – and what you do once you have achieved your goal.

In that respect, Finn Family Moomintroll is a bit like the Pooh stories, and Wind in the Willows, because you can read it and enjoy it as a wonderful story with unforgettable characters, but at the same time you can recognise higher truths, and read all kinds of ideas into it, and make the characters represent all kinds of people dealing with life in their own particular way.
I think Jansson poured much of herself and her experiences into this, just as she did with her other work. It may be a children’s fairy tale, but it seems to be very much about her world, and her responses to it. Descriptions of nature, and weather, and the natural world, which feature so strongly elsewhere, are here too, and that sense of place, and of ‘one-ness’ with place. The Moomin books were written earlier than the novels and short stories, and some of the events here can be found in greater depth elsewhere, precursors, perhaps, of more powerful pieces.

For example, the preparations made by the Moomins, their friends and acquaintances before their hibernation, are similar to the tasks carried out when the Janssons’ island summer house is shut up for the winter, and the family return home to the mainland for winter. And the scary storm encountered by the Moomins when they sail away for a picnic is Sophia’s storm from The Summer Book, with embellishments that make it even more scary.

There’s a host of characters, and storylines, which I haven’t mentioned, but I loved this, and all I can say is that if, like me, you’ve never read the Moomoins, please remedy the situation now – go and hunt out one of the books. I don’t know if they are all this good, but I’m willing to bet they are.


Oh, and a word about the illustrations, drawn by Jansson, who was an artist long before she became an author. These black and white drawings capture moments from the story just perfectly, and so they should, because this is the way Jansson saw her creations.
Posted by Christine Harding at 12:59 pm