Spellbound by a Sparkling Story!

Happy New Year people! I’m still here – I haven’t gone anywhere, and I certainly haven’t given up blogging. But I cannot believe I haven’t posted anything since the middle of November, and I haven’t really got much of an explanation. I’ve been trying to get ‘social media’ stuff up and running for Oxfam Lichfield, and I’ve been focusing so hard on that, it seems to have squeezed everything else out - I even wrote an Advent Alphabet, highlighting things in the shops and the charity's work. Here's the rhyme for 'H' on December 8.


And it was the anniversary of my Father’s death, which always gets me down, and then I don’t feel like doing much. And it there was the run-up to Christmas, and New Year, and my Mother has been to stay, and my Daughters visited, with their boyfriends, and I had a lovely time over Christmas, but The Book Trunk got a bit forgotten!

Now it’s January 1, and I’m trying to organise myself for the year ahead… Back on the diet, lots of walks planned, crochet and sewing to finish, lists to write – you know the kind of thing. Anyway, Oxfam Lichfield’s Facebook page is doing quite well after being ignored for ages because no-one had any time to do anything with it. It’s generating ‘likes’ and a few comments, and almost runs itself. I take photos, and write little bits, then schedule them to appear. Scheduling is like magic I’ve decided, because you can do masses of stuff in advance, then more or less forget about it all – I should use it more here, and it might stop me getting behind! And I wish I could use it on Oxfam Lichfield Twitter, I’m sure it would make life easier – when I’m stuck, then whatever the weather I tell people it’s ideal weather for buying books! The weather can never be too bad or too good for buying books – wouldn’t you agree?

And I’ve set up a blog for our two Oxfam shops. It’s in what can only be described as an embryonic stage, but I’ve got posts scheduled to appear, someone cleverer than me is going to work on the design and, hopefully, it will gradually acquire its own identity. So you can see, I really have been busy, and haven't been idling my time away.


Anyway, this is supposed to be a book blog, so I shall stop wittering on about my volunteering project, and enthuse about a book – Loitering with Intent, by Muriel Spark. With the exception of The Mandelbaum Gate, which I wouldn’t read again even if you paid me, I just love Spark’s novels, and this is one of her best – way up there with my favourites, The Ballad of Peckham Rye, and The Girls of Slender Means. 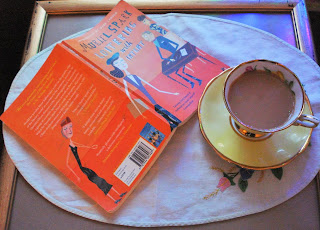 Spark doesn’t do heroines – she doesn’t do heroes of villains either – but Fleur Talbot is as near a heroine as you’ll find in Spark’s work. Fleur takes a mysterious job as secretary to Sir Quentin Oliver, who is the director of the Autobiographical Association, a very peculiar organisation whose idiosyncratic (positively batty even) members are compiling their memoirs, but no-one has got beyond the first chapter. They’re hampered by dodgy memories and lack of talent, and it falls to Fleur to try and make sense of their efforts .

She herself is writing a novel, Warrender Chase, which Sir Oliver steals, and somehow life and fiction become strangely and inextricably mixed as things Fleur believes she has created in her story actually happen, and it becomes more and more difficult to tell what’s real, and what’s not, and you start to wonder is Fleur a reliable witness to events – or is the whole mad, chaotic story spun out of her imagination.

Actually, Fleur reminds me a little of Pompey in Stevie Smith’s Novel on Yellow Paper – I know I said you are unlikely to ever read anything quite like it, but I hadn’t read this then, and quite apart from the fact that Pompey is writing a novel while she works as a secretary for publisher, there is something in these characters’ outlook on life, that is similar, and the way they stand back observing things and people.

I assume Fleur is based on Spark, and her thoughts on writing fiction and the creative process are, presumably those of the author. As in much of her other work, Spark raises issues about the nature of reality and fiction, belief in God, immortal souls, love, death, truth and lies. None of the characters ever quite connect with each other, and they all seem to have shaped their own little worlds from their own realities, but none of the realities fit together – and in any case does anyone ever know what truth really is. Loitering with Intent is darkly funny, very witty, beautifully written in classic Sparkling style, and held me spellbound from start to finish. How could anyone not like a book which opens like this:

One day in the middle of the twentieth century I sat in an old graveyard which had not yet been demolished, in the Kensington area of London, when a young policeman stepped off the path and came over to me.

And if you think that sounds gentle, then beware, because Spark is never gentle, and never safe. She’s wickedly funny, but she’s sharp and spiky and can be very unsettling indeed as she probes below the surface of polite society and turns the world upside down, and at the same time she poses those big questions about life, the universe and everything.
Posted by Christine Harding at 10:17 pm