Haphazard by Starlight - Poems for Advent

Being a bit of a magpie, I look at what people write about books, then steal authors and titles for my own use. Sometimes I require instant gratification, which is where the Kindle comes into its own. Or, if I’m prepared to wait a short while, I order online, or make a trip to a bookshop (here in Tamworth we only have The Works, which is nice in its way but, sadly, its way is not that of a proper bookshop). Usually, however, details of the desired volume store themselves away in my mind and get forgotten unless, by some strange serendipity, I come across the book whilst mooching around in charity shops and second-hand stores. Then snippets of hidden knowledge surface, and I pounce triumphantly on my literary treasure.


And that’s more or less what happened when I was visiting my mother last week, only I was browsing in a ‘real’ bookshop. Ledbury Books and Maps is one of the town’s two independent bookshops (I hope residents realise how lucky they are), and I’d been in there for ages, and bought ‘Poetry Please’ for Mum (more on this another day), and was on my way out when there, on a stand by the door, was the last copy Haphazard by Starlight, A poem a day from Advent to Epiphany, by Janet Morley. I certainly don’t remember seeing it as I went in, but as I looked at the beautiful cover, something clicked in my brain, because back at the beginning of the month Moira, over at Vulpes Libris, waxed lyrical about this book. It was the title as much as anything which caught my attention, because it’s from ‘BC:AD’ by UA Fanthorpe, and I’m a huge fan of her work – that’s why Moira’s review stayed in my mind. So I bought the book, because I felt I was meant to have it. 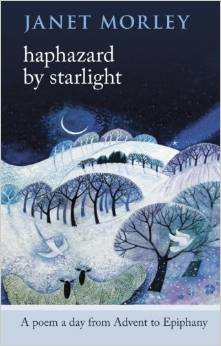 It’s published by the Society for Promoting Christian Knowledge, which may put some people off, but it’s not preachy, and it really is a wonderful collection of poems, which will take you from December 1 all the way through to January 6, with explanatory notes and comments on each.


Like all good anthologies, there’s a nice mix of old favourites and unknowns (unknown to me at any rate). I may not agree with all Morley’s choices - personally I think it’s incomplete without John Donne’s ‘Nocturnal Upon St Lucie’s Day’ (but then I think any poetry anthology is incomplete if it doesn’t include Donne). And I would have liked to see something really old, like a medieval carol perhaps, but you can’t have everything, and any anthology is always a very personal choice, and I can see why Morley made the selection she did.


In this book you’ll find Auden, DH Lawrence, Elizabeth Jennings, Gerard Manley Hopkins, Christina Rossetti, Tennyson, Sylvia Plath, and TS Eliot (Journey of the Magi, one of my favourites) to name but a few. There’s also a poem by Rowan Williams (I only know him as an Archbishop, and had no idea he wrote poetry) which I enjoyed very much. There are poems about Christmas and winter, and faith, and light and dark. But many, like Ozymandias or Dover Beach are not overtly religious, or even about Christmas or the winter season. However they do contain truths about mankind and the world in the general, and the author uses them (as she uses all the poems) as a kind of meditation, giving her thoughts on the meaning, ending each piece with a question, to make you think about your own values and beliefs, and the way we live our lives. Her commentaries and questions are reflections on life which are, as Moira says, rather like Radio 4’s ‘Thought for the Day’.
Actually, I wanted my review to be different to Moira’s but, like her, I cannot resist explaining the book’s title with some quotes from U A Fanthorpe’s BC:AD, which is the choice for Christmas Day. Here is the opening:


This was the moment when Before
Turned into After, and the future’s
Uninvented timekeepers presented arms.


And here is the end:


Walked haphazard by starlight straight
Into the Kingdom of Heaven.


Isn’t that wonderful? It always makes me catch my breath and think about ancient kingdoms, and where the Three Wise Men may actually have come from, and how the very beginning of Christianity was about poor people and minorities, rather than wealthy VIPs and rulers. And I love the way Fanthorpe describes the Nativity as ‘the moment when Before turned into After’, and that wonderful phrase about the three members of an obscure Persian sect walking ‘haphazard by starlight’.
Today’s offering is seasonal ghazal by Harry Gilonis, who I’d never heard of before. Nor did I know that a ‘ghazal’ is an ancient form of Arabic verse, dating from the 6th century and widely sung in the Arabic speaking world. According to Morley it typically consists of five or more couplets, which have the same metre, but are not necessarily linked by themes. “It is the poetic expression of the pain of loss and separation, shot through with a sense of beauty, and its normal theme is unattainable love,” She explains. “Frequently the Beloved becomes a metaphor for God, and the themes revolve around metaphysical issues.”


This poem eschews the normal rules of grammar and punctuation, and abandons any rhyming conventions and is possibly the most ‘difficult’ in this anthology. It’s only short, but is suffused with images of Christmas from carols, songs, poems, books, the Bible, as well as touching on older, pagan traditions, challenging our perception of what a poem should be, as well as our perception of the way we celebrate Christmas. At first glance the poem seems almost like a string of unrelated words, especially the first two lines:


But as you read, the allusions and layers of meaning become clearer, and words and thoughts echo each other in quick succession – it’s like a painting, packed with individual symbols, which seem to be unconnected, yet nevertheless all mesh together to form a cohesive whole.


Having given her interpretation of this poem, Morley poses the question: “What are the connections or tensions for you between Christian beliefs and the traditional pagan practices around Christmas /Yuletide?” But you could equally well consider the connections or tensions between Christian beliefs and modern consumerism. I like her commentaries, but I only read them after I’ve gathered my own thoughts on the poems. Sometimes, to my surprise, we are in accord. Sometimes I look at her views and think ‘oh, that’s what that means’, or ‘how come I didn’t see that’. And occasionally (very occasionally) I wonder if she is right.
I’m really enjoying reading this book - it's a really nice alternative to a conventional advent calendar, and I think it’s a wonderful idea to celebrate Christmas by forgetting about the glitz and glitter for a few moments each day and reading a poem. And if you’re new to reading poetry, or not very confident about your interpretation, then the notes really do help.

Edited: I should perhaps, make it clear that there are no illustrations in Haphazard by Moonlight. I chose paintings I like to illustrate the review, because I have this thing about breaking up blocks of print with pictures to make it more user friendly. I think it's the result of working as a local reporter and sub-editor for so many years, and being ingrained with the theory that photos attract people's attention!
Posted by Christine Harding at 1:00 am