Just look what I’ve got… 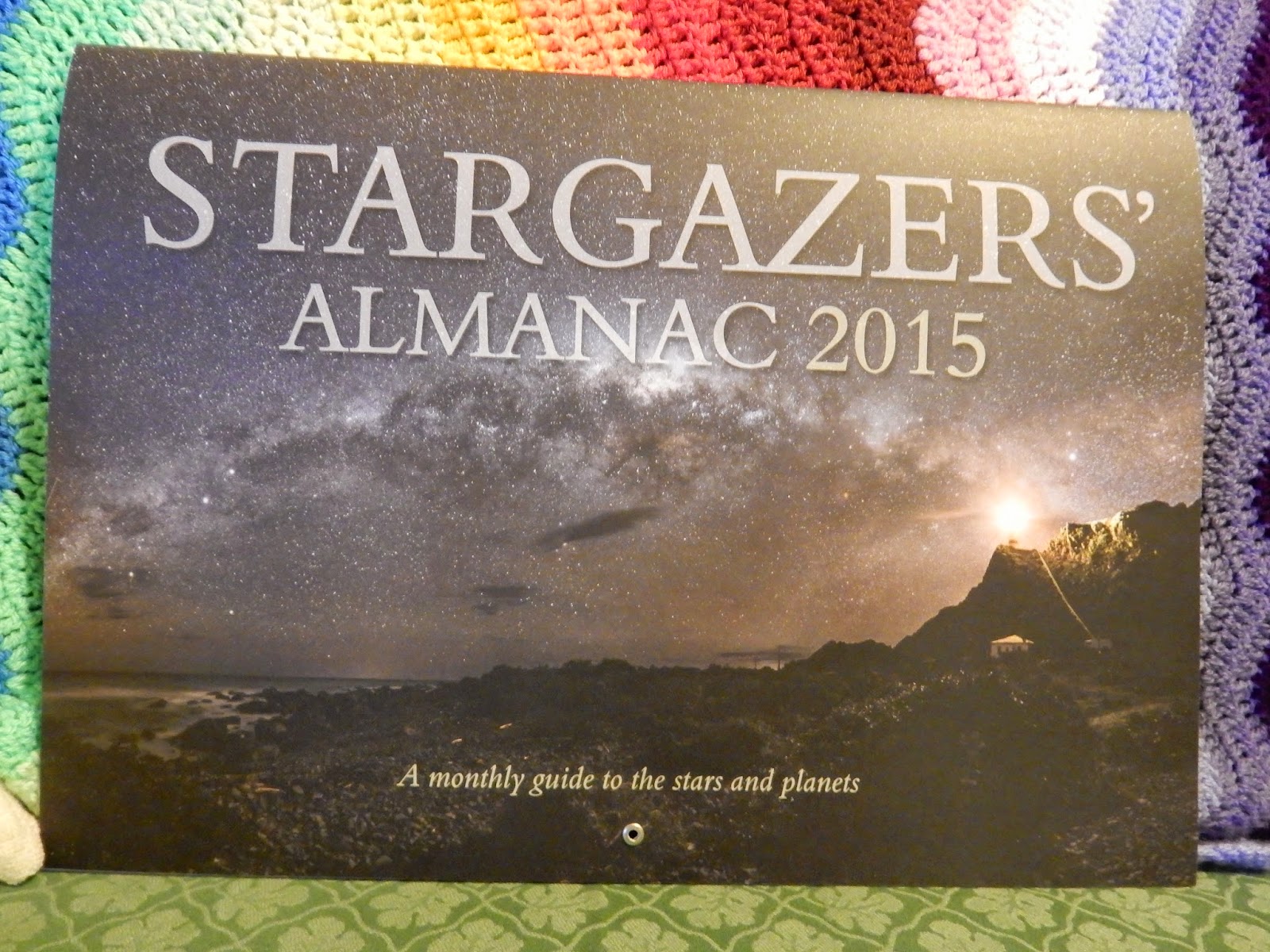 The Stargazers’ Almanac! Isn’t it beautiful? It gives a month by month account of what can be seen in the night sky, with lovely clear maps looking north and south, so you won’t miss anything. I have Lynne at Dove Grey Reader to thank for this discovery, because she mentioned it here, and I bought it because I thought it would be the perfect partner for this… 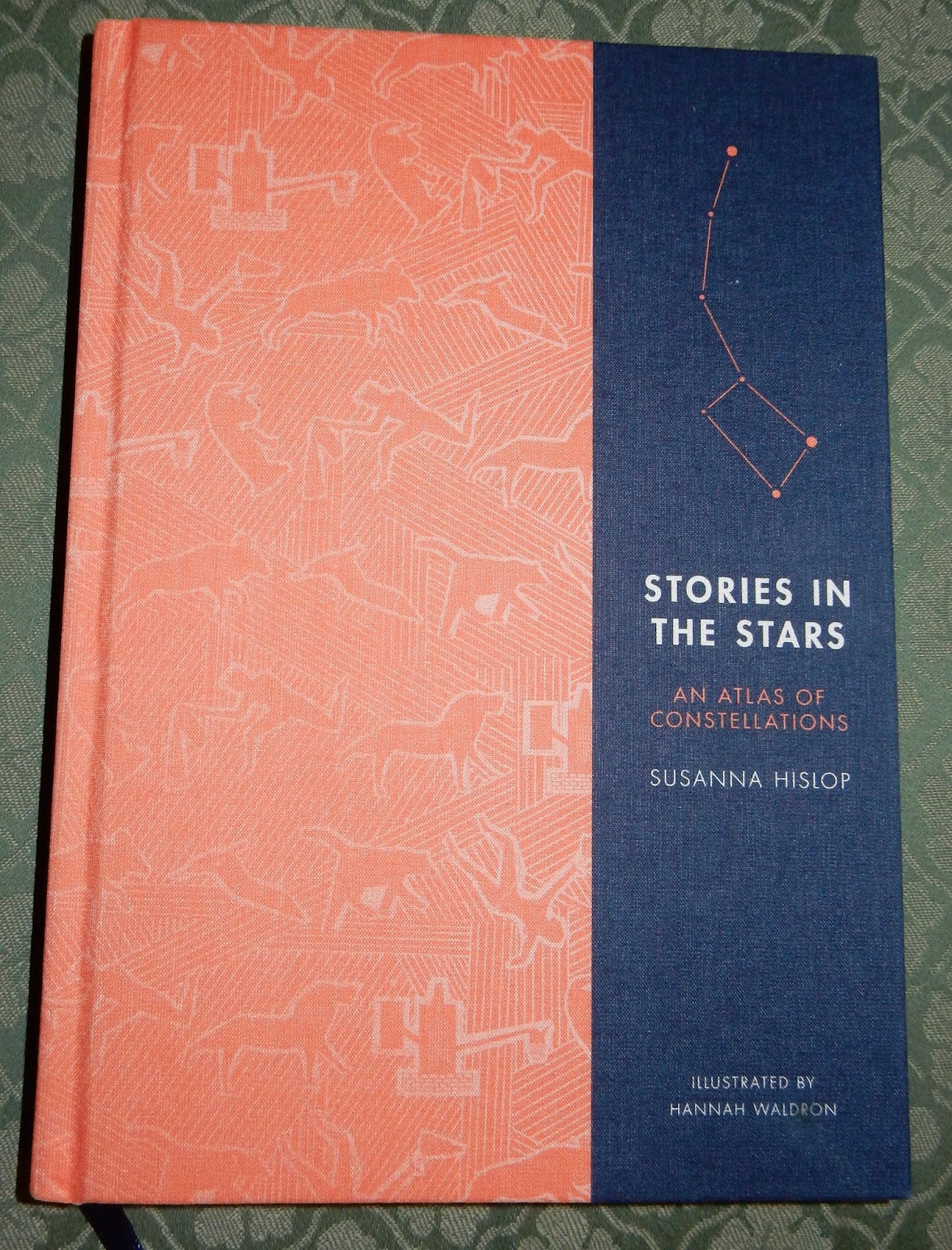 Stories in the Stars, An Atlas of Constellations, by Victoria Hislop, is exactly what it says on the label. It’s packed with tales about the stars, explaining how they got their names, and it’s a lovely mix of myths and legends, as gods and goddesses rub shoulders with heroes, heroines, villains, and some very odd creatures. And there are snippets about astronomers, scientists, explorers, mathematicians, mapmakers and mariners, all helping to show how successive cultures have viewed the stars, from early times right through to the modern age, with references to the Phoenicians, Egyptians, Greeks, Romans, Chinese, Japanese and many more, interspersed occasionally with the author’s childhood memories.

I fell in love with this book when I heard it on BBC Radio 4 – it was the Book of the Week at Christmas, and it was beautifully read, by the author and a cast of actors. It was abridged by Jill Waters, who also directed and produced the five episodes, and having now read the book (I splashed out on a brand new hardback, which is very unusual for me) I can say I think she did a brilliant job. Sadly, the BBC programmes are no longer available for listening, but if it’s ever broadcast again you really should tune in.
Hislop, who describes herself as an actor, writer, theatre-maker and juggler of things, stresses that ‘Stories in the Stars’ is not about ‘astronomical rigour’. It’s the stories of the stars she knows, not the science. And she adds:


“This is the glory of stargazing for the storyteller: above us a blank page in negative. A jet canvas pricked with white dots, and a rag-bag of myths, religions, lullabies and fairy tales with which to join them up. A whole universe of stories ready to steal, which are as unstable as the stars themselves – shining and magical, but soon to explode and re-form the dust and gas of history into new stories altogether.”
Purists may not like this dot-to-dot approach, but I do: I feel it helps make sense of all those weird and wonderful stories, some of which I already know, although others are new. The science bits Hislop does include are put across very simply, and the whole book has really whetted my appetite to learn more about stars and planets and so on, so I've dug out a not terribly good pair of binoculars, and a very tiny compass (a souvenir from the Natural History Museum) because I have no sense of direction! 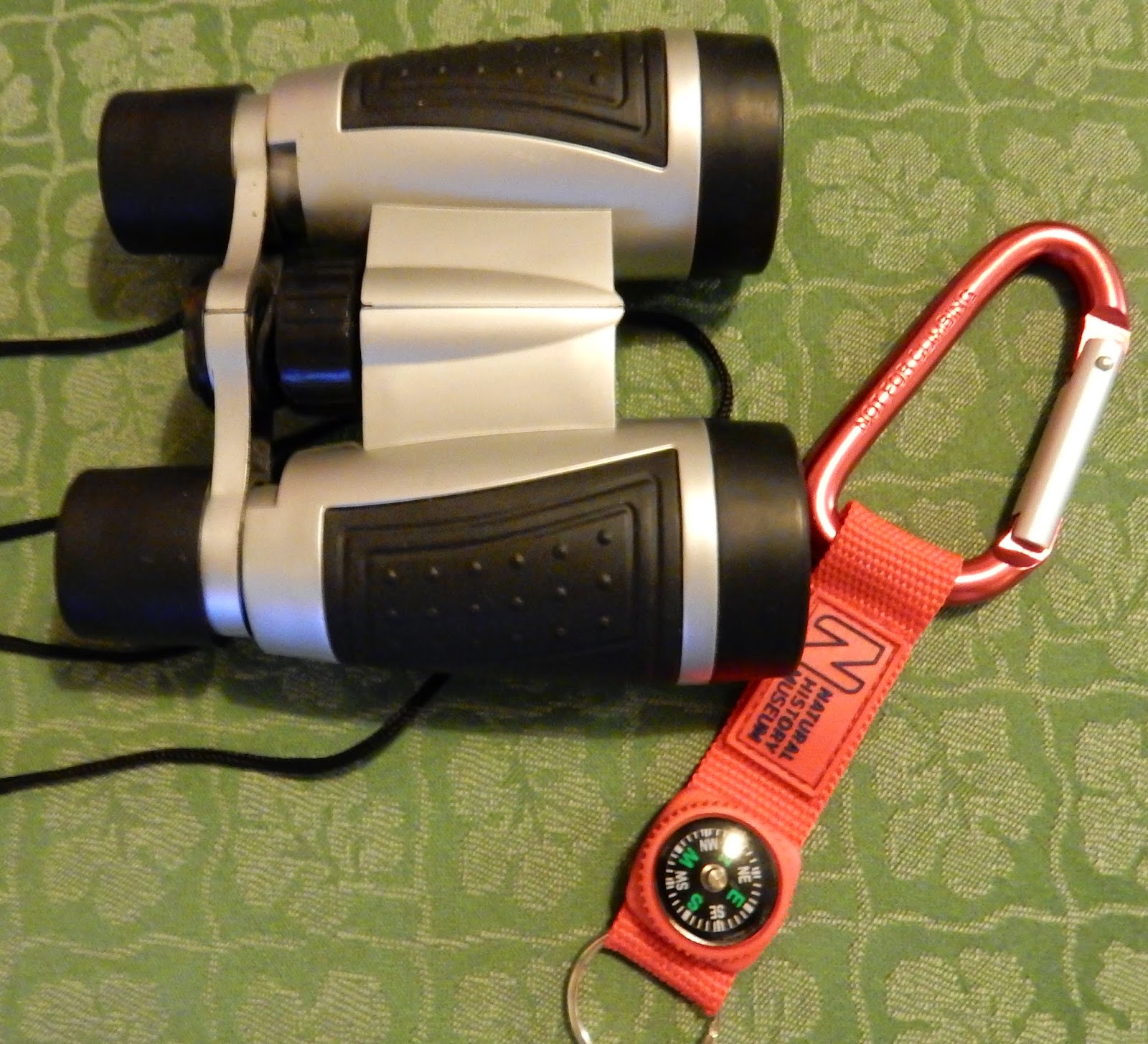 At this point I must mention the illustrated maps created by artist Hannah Waldron – after all, an atlas wouldn’t be an atlas without its maps! These are lovely and clear, one for each constellation, showing a picture of what it’s meant to be (hunter, swan, dog etc), it’s position in the sky, and the magnitude of the individual stars.


The ‘Stargazers’ Almanac’ also boasts some wonderful illustrated maps of the night sky, with details of what you see each month, and brief information about the sun, moon planets and meteors, as well as the stars, all of which makes it slightly more scientific than Hislop’s book. However, it’s quite easy to understand. And the compiler has a lovely turn of phrase. This month, for example, I learned that: “The Little Bear (Ursa Minor) hangs by its tail, at the tip of which is Polaris, infallible guide to the north.”
Isn’t that magical? Never again will I fruitlessly search the sky for something as humdrum as a small saucepan with a bent handle. Instead I shall welcome the sight of a playful bear cub hanging upside down and swinging from a star! And he here he is in the Almanac, more or less in the middle of my not very clear photo: 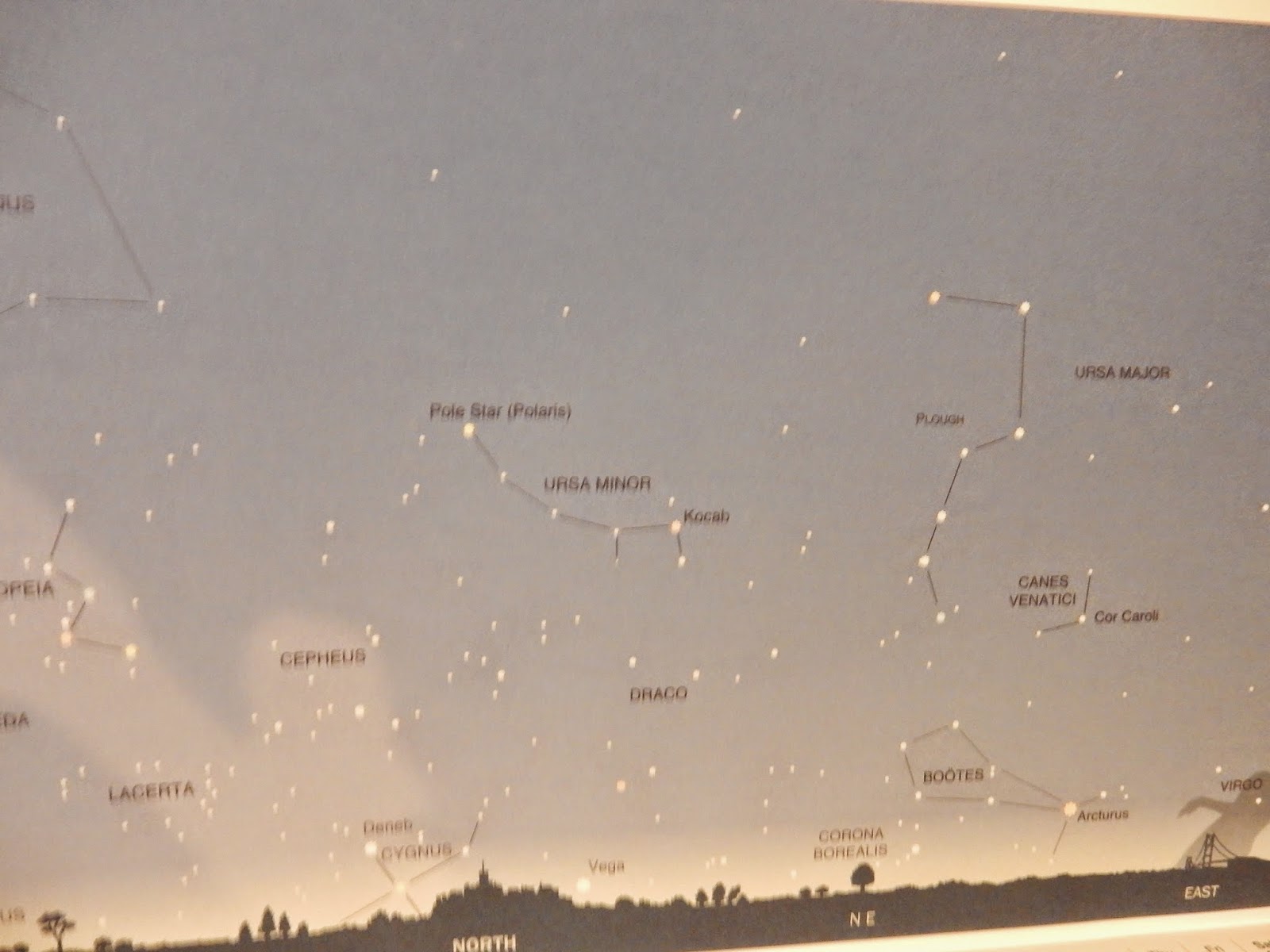 And here he is in Hannah Waldron's rather splendid illustration in the Constellation Atlas. 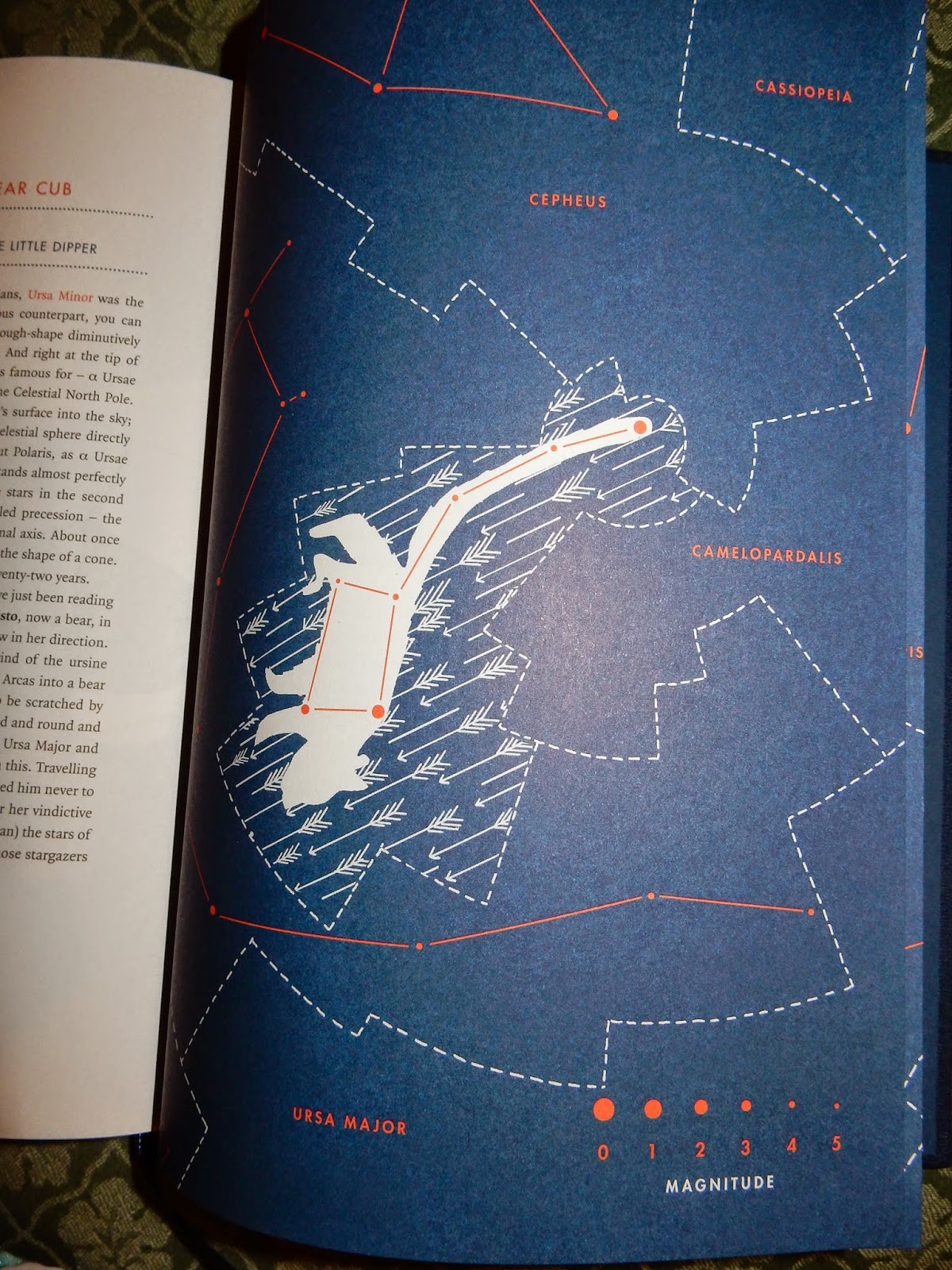 However, according to Hislop the Little Bear has a sad story to tell. He is Arcas, son of Callisto, a wood nymph who was seduced by Zeus, King of the Gods. As you might expect, Zeus’ wife Hera was not at all happy about this, so she changed poor Callisto into a bear, which seems a little extreme (and very unfair – after all, it wasn’t Callisto’s fault).


Fast forward more than a decade, and the teenaged Arcas is about to kill the bear, unaware she is his mother. But Zeus comes to the rescue (if you can call it that)… and turns Arcas into a bear as well! However, I’m not sure this solution pleased either mother or son. According to Hislop, to avoid being scratched by their sharp claws, Zeus picked both bears up by their tails, swung them round and round, and flung them into the sky. Which is why Sky Bears have longer tails than Earth Bears!
So, having got all enthusiastic about the night sky, and alerted by a line in the Almanac, I went into the back garden early on Saturday evening and managed to locate the planet Venus, shining brightly, and red Mars, a tiny, dull dot just a hair’s breadth away. They looked incredibly close - they could have been kissing or hugging! But apparently that’s an illusion, all to do with the alignment of the two planets as they’re seen from earth (once back in the warm I resorted to Google to find out more). In reality Venus is 134 million miles from Earth, and Mars is even further away - 203 million miles. So there must be a pretty good distance between them! Anyway, I gather it’s quite rare for these two planets to pass so close to each other: the last time was in 2008, and won’t happen again for another two years.
I tried very hard to take some photos, but it’s quite difficult trying to hold the camera steady and focus on something all that distance away, so my pictures were very wobbly indeed: 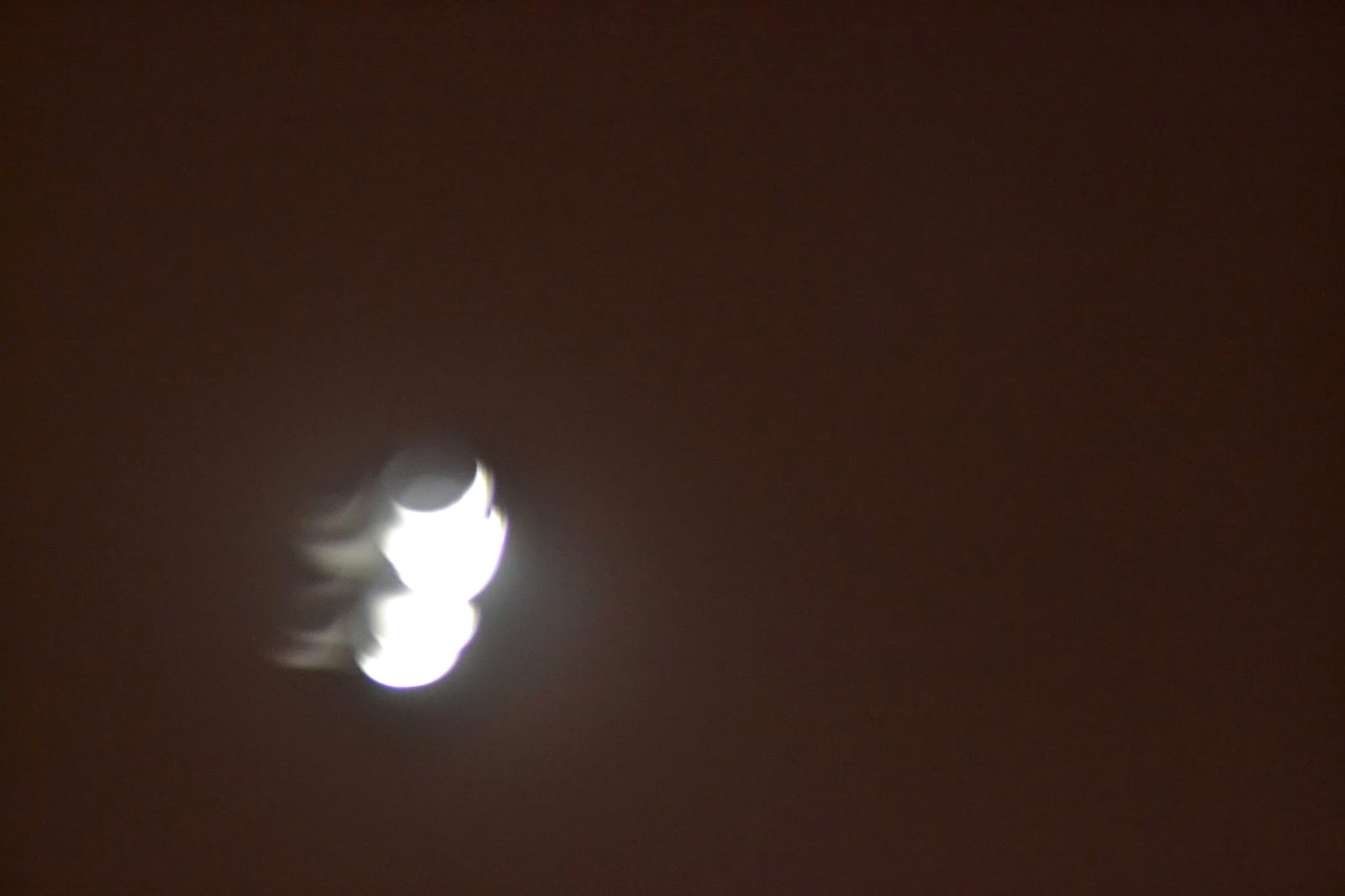 And when I did manage to get a clearer shot Mars wasn’t there at all, which is very disappointing. But you can see the thinnest of thin crescent moons, and Venus… but you have to click on the picture to make it bigger 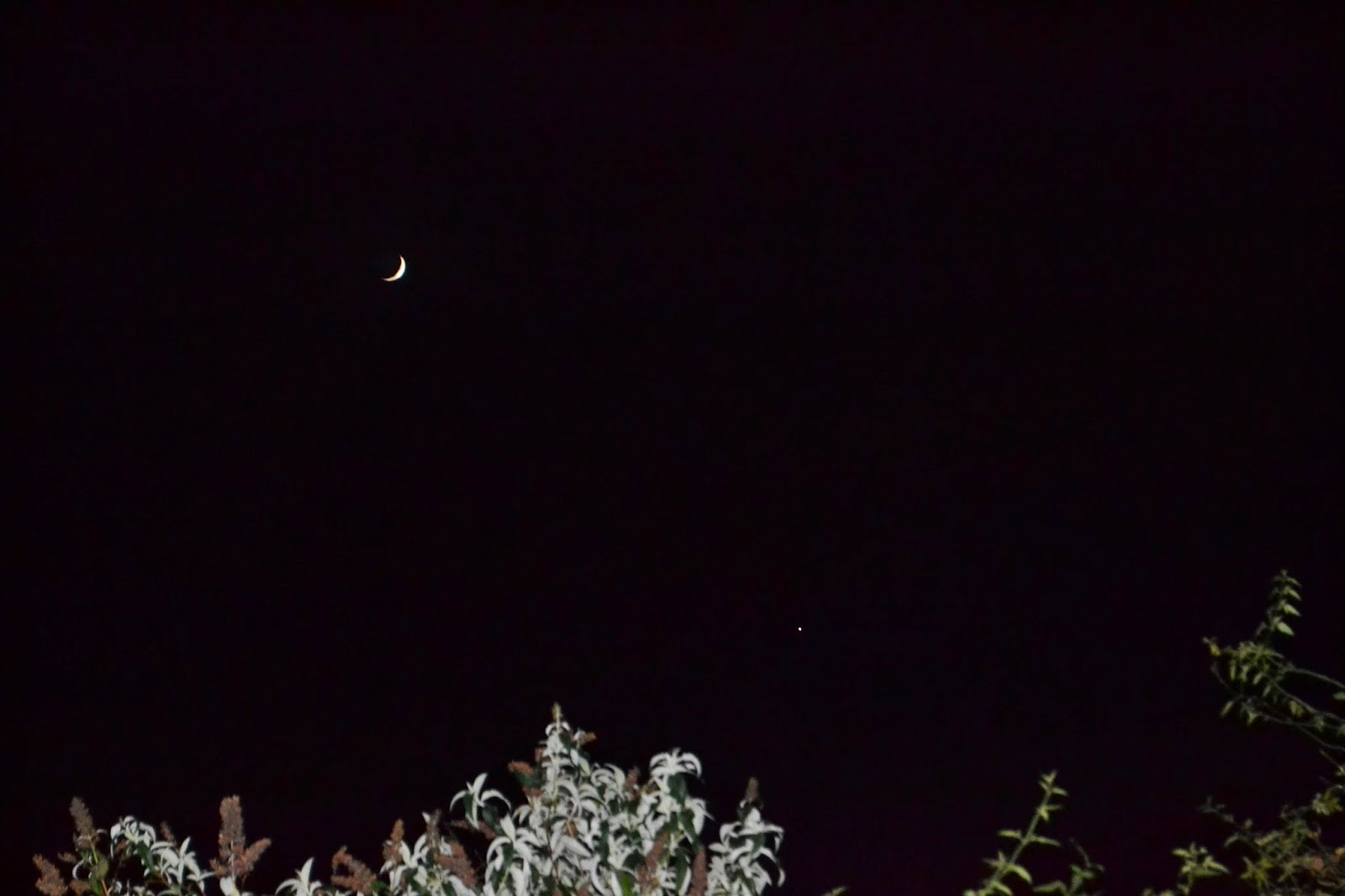 However, even if I haven’t got a proper record of the occasion I’m glad we saw it, because we are surrounded by buildings, and there’s a lot of light pollution – the Man of the House, who was a bit of an astrology enthusiast in his youth (long before I met him), thinks we may be able to find somewhere nearby which offers a better view for stargazing observations.
Posted by Christine Harding at 10:30 pm