Of Pies and Penguins...

Simple Simon met a Pieman,
Going to the fair;
Says Simple Simon to the Pieman,
Let me taste your ware.
Says the Pieman to Simple Simon,
Show me first your penny;
Says Simple Simon to the Pieman,
Indeed I have not any.
Everyone knows the old nursery rhyme, but how many people are aware that hot (and cold) penny pies were a kind of early take-away, or ‘food on the move’, long before the advent of crisps, sandwiches, burgers, chips and so on.  The ‘itinerant trade in pies is one of the most ancient of the street callings of London’ says Henry Mayhew in Of Street Piemen, which is one of those rather lovely Little Black Classics produced to celebrate Penguin’s 80th birthday (Number 26 if we’re being precise).
It contains eight extracts from London Labour and the London Poor, an investigation published in the middle of the 19th century, and I thought these pieces were absolutely fascinating, and surprisingly readable. This is the real ‘Dickensian’ London and Mayhew tells it like it is, letting his interviewees speak for themselves, so their voices travel down to us loud and clear.


I’ve always imagined the pieman with a tray of pies balanced on his head, or slung round his neck, like an illustration in a nursery rhyme book, and some did do this, but according to Mayhew in Of Street Pieman (the collection is named after this piece):


They go along with their pie-cans on their arms, crying, ‘Pies all ‘ot! Eel, beef, or mutton pies! Penny pies, all ‘ot, all ‘ot!” …. The pies are kept hot by a charcoal fire beneath, and there is a partition in the body of the can to separate the hot and the cold pies. The ‘can’ has two tin drawers, one at the bottom where the hot trays are kept, and above these are the cold pies. As fast as the hot dainties are sold, their place is supplied by the cold from the upper drawer.


Pies were savoury or sweet (made of fruit in season), and were usually baked by the sellers, about five dozen at a time, with half an ounce of meat in each, which is not a lot – about half a chipolata sausage.


The meat came from the same parts that sausage-makers used – the bits known as ‘stickings’. Gravy, kept in an oil-can, was made from a little salt and ‘water browned’ (please don’t ask me how you brown water because I don’t know). Customers poked a hole in their pie and poured the gravy in, just as we might squeeze mustard or tomato ketchup onto food at hot dog stands.


Personally, I think the pies sound most unappetising, particularly the mince-meat ones, which contained apple, sugar, currants and ‘critlings’ - the solid residue left after boiling pig fat in water to make lard. Piemen made their own pastry, but Mayhew doesn’t tell us whether they produced their own lard and critlings. Anyway, back to those mince-meat pies, which also needed ‘a good bit of spice’ to flavour the critlings, and plenty of treacle to make the mince-meat look rich.


Since there were no fridges, and pies could be hanging around for days, and were constantly warmed up, I wonder just how safe they were to eat.  The piemen grumbled to Mayhew about the new penny pie shops taking their trade, and said much of their income now came from ‘Tossing the Pieman’. Customers tossed a coin, and got a pie for free if they won. If they lost the pieman received the penny – and kept his pie.
The two orphaned flower girls whose tale is told elsewhere in the book, didn’t even have a penny to spend on a pie to share between them. They lived on bread and tea, and sometimes ‘a fresh herring of a night’, but were proud to boast they didn’t owe anyone anything, and had never pawned anything – because they had nothing worth pawning.

A seller of live birds made a better living, but the description of how birds are caught is quite shocking. It involves a net laid on the ground in fields, and a caged bird singing to lure linnets, sparrows, larks and finches. What did people do with all those birds? Keep them as pets? Or eat them?


These people struggle to make a living, but they seem happy enough, accept their lot in life, and make the best of what they have. Their livelihoods are precarious, but in their way, they’re entrepreneurs, proud of what they do, beholden to no-one.


But Mayhew didn’t just interview London’s poor; he also looked at the places where they lived, worked and played. There’s a report, or essay, on the city’s vibrant street markets, another on the Port of London, and a damming account of the bawdy entertainment (and equally bawdy audience) at a ‘penny gaff’, a kind of ‘pop-up’ theatre.


The sights, sounds and smells of a half-hour train journey to Clapham Common (then in the countryside, with a ‘little rustic station’) are recounted with great relish, and there’s an enchanting narrative of a balloon flight high above ‘The Great Metropolis’.


The houses directly underneath us looked like the tiny wooden things out of a child’s box of toys, and the streets as if they were ruts in the ground: and we could hear the hum of the voices rising from every spot we passed over, faint as the buzzing of so many bees.


It could have been written today, rather than some 150 years ago – the language, and the thoughts expressed haven’t changed at all. And as he goes ‘sailing along almost among the stars’ taking ‘an angel’s view’ of London, Mayhew reflects on human nature and concludes that it is good to forget ‘the petty jealousies and heart-burnings, small ambition and vain parade of ‘polite’ society and feel, for once, tranquil as a babe in a cot’. 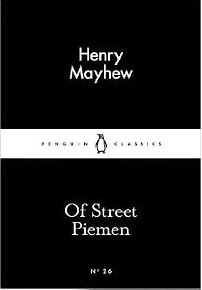 PS: Blogger has gone doolally on this post, and is doing weird things with the spacing and font, and won't be corrected, so apologies if it looks odd... ﻿
Posted by Christine Harding at 10:23 pm