The Gipsy in the Parlour 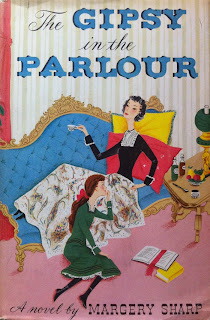 In the heat of a spacious August noon, in the great summer of 1870, the three famous Sylvester women waited in their parlour to receive and make welcome the fourth.


The three famous Sylvester women – Charlotte, Grace and Rachel – are sisters-in-law who married (and tamed) three of the wild Sylvester brothers. They are big and blonde, hard-working and warm-hearted, and they are about to meet the youngest brother’s bride-to-be. But Miss Fanny Davis, is not a bit like them. And her arrival brings discord and change, threatening the happiness and well-being of the farm…


The Gipsy in the Parlour is written with Margery Sharp’s usual light touch, but I think it’s a little darker than The Nutmeg Tree. The story is related by an unnamed narrator, looking back on her lonely childhood, when she spent idyllic summers with her Sylvester relatives on their Devon farm. The book covers two years of her life, and three visits to the farm. Our narrator is 11 when Fanny Davies comes to wed the youngest brother, and she tells us:


I marvelled how my uncle Stephen, used to the splendid Sylvester women, could have fallen in love with such a thin, pale, dusky little gypsy.


…small, very slender, rather limply dressed in black or grey, on her head a small black straw hat. There was an air of the town about her; and of something else which, I (coming out from behind my aunts), couldn’t immediately define.


That undefined ‘something else’ is slightly worrying, a hint perhaps that things are not quite right. And what is she doing down by the crab apple tree in the middle of the night? And her voice may be sweet and musical, but it is ‘wooing’, as if casting a spell over her listeners. She certainly bedazzles our narrator, making ‘a ‘little friend’ of her, gaining her trust with sweets and endearments. But she doesn’t take any part in family life, and she doesn’t help around the farm or the house. She does absolutely nothing.


And when our narrator returns to the following year she learns there has been no wedding, for Fanny has been struck down by a mysterious malady - a ‘decline’, the aunts explain. Our narrator is puzzled by the sudden illness, but says:


It wasn’t at that time, particularly uncommon. Ladies lay in declines all up and down the country…


She is relieved to see Fanny doesn’t look ill:


She had always appeared both weakly and genteel - the two essential conditions one couldn’t go into a decline without. (No common person went into one. Common persons couldn’t afford to. Also, there needed to be a sofa. No sofa, no decline.)


Was the young narrator perceptive enough (and cynical enough) to make that comment I wonder? Or is it an adult reflection, composed with the benefit of hindsight? Anyway, there is Fanny, firmly ensconced on a new sofa in the parlour, using the lustre-ware from the china cabinet, picking at the daintiest food, her every need attended tot.  The sunny room (the aunts’ pride and joy) is dimmed and silent: even the clock has been stopped, because its chimes’ bruise’ Fanny’s nerves.  And the aunts have curbed their natural ebullience and speak in hushed whispers as they creep about their home. The harmony of the house is broken, the Sylvester women are no longer in total accord with each other, and there is grey in Aunt Charlotte’s hair. 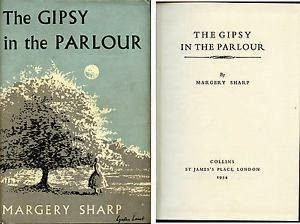 Back home in London the narrator receives a note from Fanny, with a letter for Cousin Charles (Aunt Charlotte’s estranged son). Believing Fanny is trying to heal the rift, our narrator delivers the letter herself and finds Charlie working as a chucker-out at Jackson’s Economical Saloon. She becomes friendly with his lady friend, Clara Blow, who runs the establishment, and is as big, capable and warm-hearted as the Sylvester women. Charlie, according to Clara, is pining for the farm - but something (or someone) is preventing his return…


Our narrator, whose experience of life and love is derived largely from romantic novelettes borrowed from the succession of cooks at her parents’ home, decides that Charlie must marry Clara and return to the farm. And she wants to cure Fanny.


It’s a shame to reveal what happens on the next trip to Devon, but Fanny, as we suspected, has a cunning plan and when this is exposed Aunt Charlotte whisks her off to London for a showdown with Charlie. Actually, whisks is the wrong word, because preparations for the trip take five days. Aunt Charlotte travels with her own food, so the aunts bake pasties and cakes, and she packs eggs and a tea-caddy (for breakfasts) – imagine how a modern hotel if you did that! Then there are her clothes:


All the flowers were cut from her best bonnet, steamed and re-attached, the strings were treated similarly, also ironed. Her skirt and bodice were sponged with vinegar. Her underlinen required no attention at all, the store was so great and so immaculate we had to pick out the best, two of each, and one dozen cambric handkerchiefs, still bearing her maiden cypher.


Fanny is not so splendid. She possesses the dress she stands up in, two limp dresses more, and a peacock silk ball-gown. Her underlinen is ‘charitably’ ignored by everyone. She has no mantle, only a shawl, and her black straw hat is too far gone to steam into better shape.


What Fanny does have is the ability to seize an opportunity, but it’s her manipulative powers which give the novel a dark edge. She rules the household, while seeming to be weak, defenceless and passive, so the aunts must bend their will to her and subdue their real nature. And in an odd way they are complicit in this situation. They are aware of what is happening, but they go along with it. They won’t turn Fanny out or treat her badly because she is Stephen’s betrothed, and they don’t want to bring shame on the Sylvester name.


I loved this. I like Sharp’s writing style, amusing and light-hearted with (if you’ll excuse the pun) a sharp edge. Her descriptions of people (even the minor characters) are very astute. And while the ultimate outcome may be in little doubt – Aunt Charlotte, after all, is a force to be reckoned with – there’s enough tension to keep you reading to the very last page. All in all it was a very satisfying read.

PS: I'm just wondering I could link this to the Reading England Challenge, over at Behold the Stars. The aim is to travel England reading, and read at least one classic book per however many counties of England you decide to read. I think this counts, since it is set largely in Devon. But to be honest, much as I like Margery Sharp I  don't really think she counts as a classic, so maybe not. 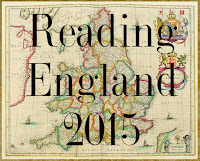 Posted by Christine Harding at 7:40 pm