Do You Clean Vegetables With Soap? 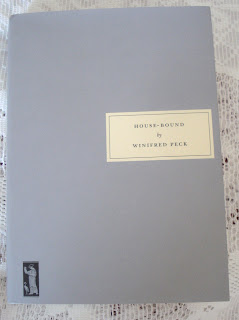 Today's novel was described as 'a real oddity' and 'a book unlike any other' when it was discussed on the Radio 4's 'A Good Read'. House-Bound, by Winifred Peck, (published by Persephone), is the second in my loosely-themed 'housework' quartet. The time is 1941, the place is Edinburgh, and middle-class, middle-aged Rose Fairlaw, unable to get servants, decides she will do the cooking and cleaning herself.
My initial reaction was that Rose needed a copy of 'How To Run Your Home Without Help', by Kay Smallshaw (reviewed here), but this wonderful and invaluable domestic guide was was not available until 1949, while Peck's book was published in 1942. Anyway, it was selected for the radio programme by author Sara Maitland, who described it as 'a bit of oddity' (albeit a 'rather good' one) and 'one of the weirder novels I've ever read'. Fellow guest Michael Morpurgo and the show's host Harriet Gilbert both agreed. You can listen to their discussion here, and can also read a transcript of their conversation in the latest edition of the Persephone magazine Biannually.
Personally, I'm not sure I agree with everything they say, because the book is actually not that odd (certainly not compared to Rachel Ferguson's 'The Brontes Went to Woolworths', which remains the strangest story I have read). Granted, the relationships are a little peculiar, but relationships in novels are rarely straight forward, creating tensions vital to the plot, developing characters, and demanding an emotional response from readers. I think what they found so weird was the lifestyle, social setting, and moral code of the day. Time and place can be difficult to grasp when they are so different to your own life – I'll bet Jane Austen's concerns about social position and marriage must appear pretty incomprehensible to many people these days, but no-one describes her books as weird or a bit of an oddity.
Oh dear, this is turning into a rant about other people's views on 'House-Bound', rather than a piece about my own opinions. So here goes. I'll start by saying that Rose is not one of those self-deprecating women who cope with domestic disasters, house, husband, servants, children and tradesmen with good-humoured aplomb. She has a sense of duty, whether you're talking about relationships or housework, and she regards managing without servants as her contribution to the War Effort, freeing up younger, fitter, more able women for more valuable war work.


The reaction of her family and friends to her decision is hilarious, even if they do show the values of the strong, snobbish class system in force at the time. And her early efforts at housekeeping are very funny indeed. When it comes to cooking and cleaning she doesn't have a clue. She's never boiled a kettle, let alone an egg, has never wielded a duster – and has certainly never been expected to answer the door and deal with common people like postmen and milkmen.
It's a real shock to her system. “On the first morning of her new vocation Rose decided that she had never in her life seen anything as repulsive as a house in the early morning.” I know the feeling. I find if there's anything worse than dealing with household debris and dirty dishes, it's dealing with household debris and dirty dishes that have been left to fester overnight. The answer is to de-clutter and wash-up before going to bed but, sadly, this is something I rarely do.
And anyone who has ever lost the battle with a less than perfect vacuum cleaner will appreciate Rose's struggles: “Sweeping was easy she told herself as she rumbled the carpet-sweeper up and down the beige self-coloured carpet of the dining room [...] the wretched thing seemed to drop out a loathsome gobbet of grey fluff more often than it picked up a crumb.”

She doesn't know how to clean vegetables (does one use soap, she wonders), and her first breakfast is a disaster - the coffee boils over the bacon and toast and makes the stove brown, so Rose's husband Stuart eats sardines! Luckily for her, she is rescued by Mrs Childe, who knows everything there is to know about cookery and housework (and some!), and puts in three hours a day, working, and teaching Rose how to do things herself. And there is additional advice from Major Hosmer, a charming young American army psychologist who, coincidentally, turns out to be treating Rose's troubled daughter Flora.

However, despite the laugh-out-loud funny passages, this book is not a comedy. There is tragedy here, and serious social commentary. Rose has little time to reflect on politics or religion (beyond huried prayers begging God to protect those she loves) but she knows the world is changing. She feels house-bound, tied to her pots and pans, and sees the connection between this and the wider world. The word house-bound, she says: “... belonged not only to herself, not only to Martha in Bethany, but also, surely, to all the unhappy individuals and races all over the world. Peoples, countries, empires, shut themselves up in their own domains, refusing to consider the views on which others gazed from their windows...”

I haven't looked at the other characters or the relationships in this novel, but I will mention the back story. Rose marries and has a daughter, but her husband is killed in the First World War, while Flora is just a baby. Rose's best friend, her cousin Lilias, moves in with her baby son Mickie, while her husband is fighting. The children are brought up together, but Lilias dies from pneumonia, so Rose cares for Mickie, becoming obsessively fond of him. When Lilias' husband – Stuart Fairlaw – returns, he marries Rose, because they are both lonely and can comfort each other and make home for the children.
They have a son, Tom, but the marriage is passionless. The one overwhelming love of Rose's life seems to be Mickie, and when he falls ill with polio she shuts herself away to nurse him. When she emerges, two years later, he is cured, but her relationship with Flora is irretrievably damaged, and her chances of growing closer to Stuart are doomed.

It's not until the end of the novel that Rose looks back and remembers her first husband, and the hopes they had for Flora, and is able to reach a kind of acceptance of what life has to offer, and to move on. But she is still bound by duty and doing the right thing. She will continue to do what she must, remaining slightly aloof from everyone and everything. I get the feeling that underneath is a different kind of woman who is too scared to struggle free – someone who would like to flirt, and dance, and have fun.


House-Bound is one of those novels you could read over and over again, looking at different aspects. One last point (well, two really), Peck was obviously amazingly well-read, because House-Bound is jam-packed with literary references, (many of them unattributed), and there is an interesting Afterword by her niece, the novelist Penelope Fitzgerald.
Posted by Christine Harding at 3:20 pm