A Place where Lepers were Outcast... 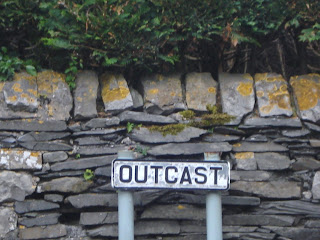 We passed this sign whilst out walking during our Cumbrian holiday. It's the name of an area, like a hamlet, which is certainly not big enough to be a village, and is now part of Ulverston. According to a local information leaflet, it was once the place where lepers were sent – cast out from the community where they lived before. However, there are no further details, and I'm having problems trying to find anything out, so I may contact the tourist office and see if they can recommend a local historian who may be able to help.
Anyway, the sign reminded me of 'The de Lacy Inheritance', written by my friend Elizabeth Ashworth, which has one of the most chilling openings I have ever read, with words taken from The Mass of Separation, which excluded lepers from family, home, society and church.
I'd never heard of this particular custom, so I looked it up, and found the ritual spoken by a priest even more horrifying than Elizabeth made it sound, with a curious incantatory quality, which reads like an ancient curse. It is hard to imagine listeners remaining unmoved by the rite, which banned lepers from any form of normal human contact – even touching the rim or rope of a well was forbidden unless the sufferer was wearing gloves. It must have been such a lonely life, cut off from everyone they knew and loved, unable to make a living or indulge in any leisure pursuits, and denied even the comfort of the church (although some places of worship had a special window, so sufferers could stand outside and listen to a service).
It made me realise what a terrible disease leprosy was in the days before drugs were available to cure it (it was well into the 20th century before this happened – Victoria Hislop's novel 'The Island' shows how attitudes changed). I always think of lepers living in special hospitals, or lazar houses as they were known, where they were cared for by monks, but I may have gleaned this idea from Ellis Peters' excellent Cadfael books, and I'm not sure how true it was. I understand there were also 'colonies' which were not attached to religious institutions, where sufferers lived as normally as possible, totally isolated from the rest of the world. Additionally, may beggars became became beggars, travelling from town to town, ringing a bell which warned others to keep away, eating scraps left out for them, and maybe staying the occasional night at a lazar house. For more Saturday Snapshots see  Alice's blog at http://athomewithbooks.net/
Posted by Christine Harding at 6:20 pm