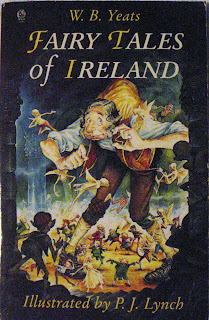 Fairy Tales of Ireland by WB Yeats, published by Young Lions, is a magical, lyrical collection of 20 stories chosen from those collected by the poet. Mostly they tell of fairies, giants and witches from the Otherworld, and the dealings they have with humans, with guile and cunning used on both sides. The juxtaposition of the mundane with the miraculous makes for some fine tension as the everyday world clashes with supernatural events and beings. I was going to say there's conflict between the real world and the world of imagination, but that would be wrong because Yeats firmly believed in the existence of fairies, and he relates these stories as if they were a matter of fact – and who is to say they are not.
Within the tales you will find joy and sorrow, fear and bravery, slapstick humour and moments of high emotion. Alongside the folk tales are others which owe their their origins to ancient Celtic poems and sagas. But they are all told in simple language, in a manner which demands to be read aloud to best enjoy the rhythms and nuances of Yeats' story-telling. And, after all, for many generations these traditional tales were not written down, but were recited aloud as the listeners sat around a fire, laughing and weeping with every change in fortune experienced by the heroes and heroines.
The book opens with his poem 'The Stolen Child', which I love, but with 'The Priest's Supper', the first fairy tale, I'm as lost in the writing as I was when I was a child, hooked on fairy stories, myths and legends, which is why I couldn't resist buying this book when I spotted it in a charity shop.
It is said by those who ought to understand such things, that the good people, or the fairies, are some of the angels who were turned out of heaven, and who landed on their feet in this world, while the rest of their companions, who had more sin to sink them, went down farther to a worse place. Be this as it may, there was a merry troop of the fairies, dancing and playing all manner of wild pranks, on a bright moonlight evening towards the end of September.
See what I mean about the mix of reality and the otherworld? The mention of the season is so very precise and seems to tie these fairies to a time and place – but the Catholic Church is never far away when this kind of trouble is afoot, and these non-Christian creatures are bested by pious Father Horrigan before any harm is done. But not all tales end happily - in one, an unmannerly hunchback ends up with a second hump.
And one, 'The Soul Cages', is spookily disturbing as Jack travels beneath the waves and meets Coomara, who sets traps (like lobster pots) to trap the souls of drowned sailors.
My favourites, perhaps because they are stories I have known, in various forms, since childhood, are 'A Legend of Knockmany', and 'The Twelve Wild Geese'. In the first Fin M'Coul's clever wife Oonagh devises a scheme to help him outwit the giant Cucullin, who can make a young earthquake or flatten a thunderbolt. It's a wonderful plan, as wily as anything dreamt up by Odysseus, and is wonderfully told. Just listen to what happens when Oonagh persuades Cucullin to turn the house around:
When Fin saw this, he felt a certain description of moisture, which shall be nameless, oozing out through every pore of his skin; but Oonagh, depending upon her woman's wit, felt not a whit daunted.
In 'The Twelve Wild Geese' a beautiful princess must spin bog-down into thread and knit it into shirts so her 12 brothers, who have been turned to geese, can be transformed back into men. As a young child the story I read and loved had the young men flying about the countryside as swans before they regain their natural shapes, thanks to wearing shirts woven from nettles by their sister.
Much later I came across the legend of the Children of Lir, where Lir's daughter and three sons are changed into swans and doomed to remain in that form for 900 years – then they are blessed by monk, become human once more but, since they are now almost 1,000 years old, they crumble to dust. I am not sure whether 'The Twelve Wild Geese' owes its origins to the Children of Lir, or whether it is one of those strange tales where a successful outcome is only possible if an impossible task is completed. Perhaps it is a mixture of them both, since folk tales are often drawn from many sources.


I am posting this on the Ireland Challenge 2012,  organised by CarrieK on this link.

Posted by Christine Harding at 7:13 am