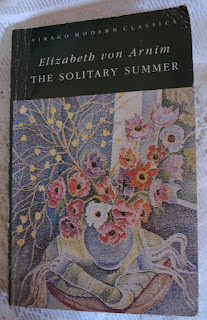 August has come, and has clothed the hills with golden lupins, and filled the grassy banks with harebells. The yellow fields of lupins are so gorgeous on cloudless days that I have neglected the forests lately and drive in the open, so that I may revel in their scent while feasting my eyes on their beauty.
So opens Elizabeth von Arnim's chapter on August in her book The Solitary Summer, which is written in the form of a diary. And, as with some of the other flowers she describes, I suspect that these plants must be very different to the hybridised garden varieties we know today. Modern lupins come in a huge range of pinks and purples, but I cannot call their perfume to mind, so perhaps von Arnim's beautiful blooms were wild flowers.
And here, in her first 'entry' for the month, the writer who sought solitude seeks a companion with whom she can share the pleasure of the lupins. “I am frightened once more at the solitariness in which we each of us live,” she writes, and tells us that only one of her many friends has similar tastes – and that they almost fell out because this particular friend would not like to be a goose-girl! Von Arnim who, it has to be said, has a very romantic view of rural life and country folk, says: “For six months of the year I would be happier than any queen I ever heard of , minding the fat white things.” She would, she adds, keep one eye on the geese, and one on a volume of Wordsworth (overlooking the fact that goose-girls couldn't read, and were unable to return to 'civilised life' during the winter). But nevertheless, she does present a charming view of her imaginary rural idyll.
Visits to the 'middle class' seaside and the pleasures of food come under her scrutiny, but by August 16 she is still concerned with her garden, which should be beautiful from 'end to end'.
It makes one so healthy to live in a garden, so healthy in mind as well as body, and when I say moles and late frosts are my worst enemies, it only shows how I could not now if I tried sit down and brood over my own or my neighbour's sins, and how the breezes in my garden have blown away all those worries and vexations and bitternesses that are the lot of those who live in a crowd.
Her joy in nature, and her love of life, are so enthusiastic that I cannot help but smile with her, and sympathise when she recalls the pious missionary who told her off for being happy when we live in a 'vale of woe'. And I can only agree when she says that if she is miserable and discontented it will not help anyone else.
There's a charming interlude when she discusses naughty boys with the April, May and June babies, who persist in speaking in their usual mix of English and German, with only the occasional word of French. When von Arnim remonstrates with them, she is told that while Seraphines speak French to children, mothers do not (Seraphine is their nurse) and the conversation ends in tears – so she organises a 'ball' for them, where they dance in triangles round the pillar in the library, while she plays cheerful tunes on the piano, before they eat radishes for supper (which give them nightmares) and curtsey before they go to bed. It all sounded a bit a like the impromptu indoor picnics we used to organise for our daughters when they were small, and they ate a back-to-front meal (pudding first) and danced madly round the room while the Man Of The House played his own folk-style nursery rhymes on the guitar. My memories seemed to bring von Arnim closer, and I thought mothers and young children have not really changed all that much over the years.
Later she visits the mill, where the water is 'ablaze with the red reflection of the sky' and the pools are full of water-lilies and eels. This time she doesn't go boating, but she recalls how the miller is always uneasy when she goes punting, for he insists that 'people with petticoats' were never intended for punts and 'their only chance of safety lay in dry land and keeping quiet'. She is tired, so she sits quietly sipping tea and reading Goethe's 'Sorrows of Werther'.
Sitting there long after it was too dark to read, I thought of the old miller's words, and agreed with him that the best thing a woman can do in this world is to keep quiet... Keep quiet and say one's prayers – certainly not merely the best, but the only things to do if one would be truly happy; but ashamed of asking when I have received so much, the only form of prayer I would use would be a form of thanksgiving.
I don't know that keeping quiet is necessarily the kind of advice that would be welcomed by women in the 21st century, but perhaps counting one's blessings is not such a bad thing.
Posted by Christine Harding at 1:00 am