Oh, I Do Like To be Beside the Seaside!

We've had a few warm days recently, but it's not been much of a summer, so when I came across these seaside pictures, taken in Bognor Regis a couple of years ago, it conjured up images of a lovely hot autumnal day during a mini-break down on the south coast. So, even though I've used them before, I couldn't resist posting them again for a Saturday Snapshot, with apologies to anyone who has already seen them! 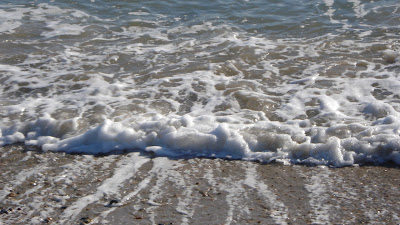 When I was a child we holidayed in and around Bognor on several occasions, and I remember a bustling seafront, packed with deckchairs on the shingle beach, and crowds of shrieking children paddling in the sea. But when we visited in October 2010, despite the blue sky and sunshine, it had the deserted out-of-season look common to most seaside towns at this time of the year, and it seemed smaller and less prosperous than I remembered. 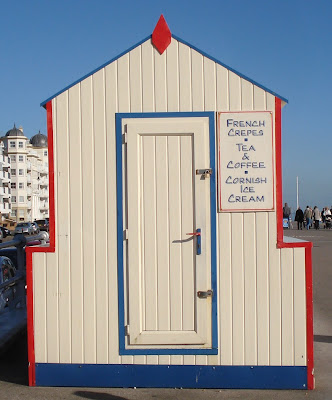 Most of the businesses based in the brightly coloured wooden huts on the promenade had locked up for the winter but a few were still plying their trade. I was tempted to buy a shiny, metallic windmill, stuck into a polystyrene base sculpted into sand-dunes and painted a particularly bilious shade of yellow - but the display was so cheery and cheeky it seemed a shame to disturb it. 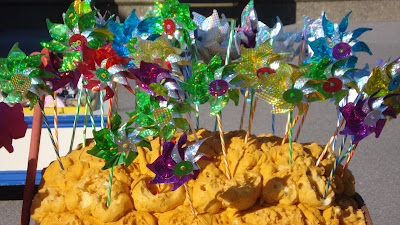 We sat on garden chairs beside a strangely impermanent-looking cafe, and sipped scalding hot tea in paper cartons as we watched the waves break on the shore, where a small boy, undeterred by the lack of sand, set to with his plastic bucket and spade to create a stonecastle, surrounded by a traditional moat. 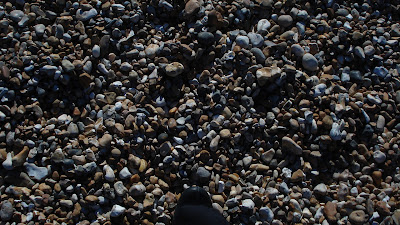 We listened to the cries of the seagulls, and the swoosh and crunch of the waves on the shingle, soaked up the sunshine, stared into the horizon where the sea and sky merged into each other and felt at peace with the world. 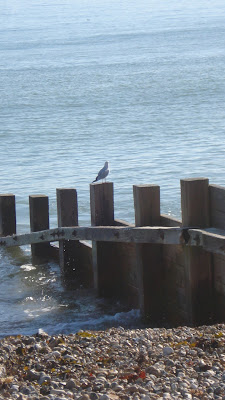 I'm sure we enjoyed it more than George V, who stayed there in 1929, recuperating from illness, and residents were so delighted with this honour they asked his permission to add Regis to the town's name. Royal assent was given, but the king seems to have been unimpressed - his final words are alleged to have been 'Bugger Bognor', uttered when someone suggested he would soon be well enough to visit the resort again! Sadly, perhaps, I think this is an urban myth, and there seems to be no evidence to back it up.

Posted by Christine Harding at 12:01 am