True Love and a Happy Ending 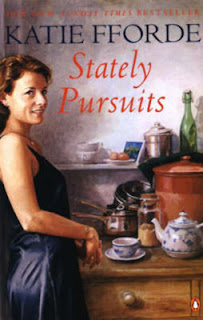 When Hetty Longden arrives at her boyfriend's cottage and finds him in bed with another woman she rips up the embroidered antique sheet which covers the couple, and drives into his expensive Porsche, wrecking her own car in the process. Heart-broken, she abandons job and flat, and retreats to her parents' home. But her mother, determined not to let Hetty wallow in self pity, packs her off to house sit for great-uncle Samuel.
The house in question is a beautiful old mansion, falling into decay after years of neglect. There is no money for repairs, and Connor, the heir to the property - whom Hetty hates even before she meets him - wants to turn his inheritance into a theme park. So Hetty unites the villagers and sets out to save the building and its surrounding land. And the scene is set for conflict and misunderstanding, before the inevitable, highly satisfying happy ending.
Stately Pursuits is classic Katie Fforde and is thoroughly enjoyable. As I've said before, some people turn their noses up at her work, and are very dismissive of romantic fiction, but I think they are missing out. Like Maeve Binchy, Fforde is a great story teller, and has a warmth and compassion that shines through. Her heroines, including Hetty, are feisty, independent, intelligent women, who don't always recognise true love when they stumble across it, but are always credibly drawn, and the host of minor characters are also entirely believable. And it's the relationships between characters that is one of Katie Fforde's great strengths. She writes well, with wit, humour and intelligence, and creates tightly constructed plots that keep you glued to the page (well, I can never put them down, and I'm sure there are many readers who feel the same way).
It could be argued that there's a certain similarity in plots: girl meets boy, there's some kind of misunderstanding (or else they hate each other on sight), there are various problems to be overcome, and eventually they get it together and, one hopes, live happily ever after. And what's so wrong with that? After all, when you think about it, the love lives of Elizabeth Bennett, Margaret Hale, Molly Gibson and Jane Eyre all follow a similar pattern!
There's no shock of language here, and no experimentation with the format of the novel, so I dare say Fforde wouldn't win approval from a Man Booker judge. But there are times when you want something familiar that's light and comforting, something that you don't have to analyse, or think too deeply about.
Oh dear, I seem to have ended up writing a general piece about Katie Fforde, rather than a specific review of this book, but it was a lovely read, and was very funny in places – I loved the account of poor Hetty trying to get to grips with the antiquated kitchen, and the way we can see that she and Connor are meant for each other, even though she refuses to acknowledge the attraction she feels. And, despite the 'stately' setting, it's very down to earth, and Hetty is so likeable, and so willing to set to and turn her hand to anything as she fights to keep the house alive, that you can't fail to be charmed by the story. I know it's a fairy tale, but I've always had a weakness for fair tales, and this is no exception.
This particular edition, published by Penguin in 1998, is another of those Katie Fforde books with a proper painted cover picture, which I always snap up when I see them because they are so much more pleasing than those modern pastel fronts which scream 'chick-lit' at you and seem to be a uniform design. Illustrations on the older versions of Fforde's novels are much more individual and, I think, much more suited to her work. The cover on this book was painted by Jean-Paul Tibbles, who is known for his beautifully detailed portraits.
Posted by Christine Harding at 1:00 am