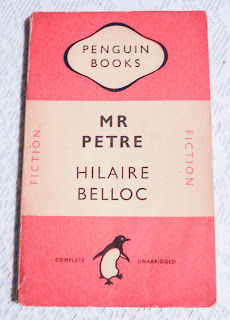 It’s not often I give up on book, but I gave up on Hilaire Belloc’s Mr Petre. Actually, I was going to say I’m sorry to admit I didn’t finish this book, but then I thought why should I feel apologetic – after all, I don’t have to read things I don’t like, or can’t get along with. The days when I had to study books I didn’t enjoy have long since gone (thank goodness), and as far as I’m concerned, reading should be a pleasure, and this one wasn’t. I thought it was a forgotten novel that's best left undiscovered!

The blurb on the inside cover made it sound quite enticing, which shows just how wrong blurb can be (and it says he landed at Southampton, but the novel mentions the coast of Devon, and the Sound, so I assume he docks at Plymouth, but I’ll forgive the blurb write for that). Anyway, our hero arrives back in England, and sets off for London aboard a train feeling an ‘odd sense of freedom’ and ‘unnaturally careless’. But recent events blur and fade…

Then, overwhelmingly, in a flash, the truth broke upon him. He had lost all conception of his past: every image of it. He knew where he was. All about him, the landscape, the type of railway carriage – everything was familiar, but of any name of place or action or movement in connection with himself prior to that sleep nothing whatever remained.

He has no idea who he is, his luggage and despatch box remain unclaimed, and all he has in the world are the clothes he stands up in, £63 in English notes, and a handful of change.
A taxi takes him the Splendide hotel – because he is obviously a man of taste and money, and en route he decides he is Mr Petre (or possibly Peter), which is something to go on. He is scared of being thought a fool and laughed at if he tells the truth and says lost memory and can’t remember who he is. So he gives this name at the reception desk, and when the clerk asks ‘Mr John K Petre?’ he says yes. And from that point on our Mr Petre is caught up in a whirligig of events over which he has no control, and no understanding. For John K Petre is a millionaire who has money and makes more, and everyone wants to know him, to seek advice, to make their own fortune.

The novel is a satire, targeting financial institutions, and city financiers and bankers and their hangers-on. And therein lies my problem I think, because my mind just shut down when I came to the stuff about investments and such like, and there did seem to be a lot of it. I couldn’t take it in, I didn’t care, and it was boring. I couldn’t even muster enough interest in the characters for them to carry me through: they were dull, flat and boring as well.

So in the end I gave up completely, and struck the book on the pile destined for Oxfam – but not before sneaking a look at the end, to find out what happened to Mr Petre, because I wanted to know if he got his memory back (yes) and whether he really was Mr John K Petre (no, but his name is Peter). He has to battle in the courts to clear himself on a charge of impersonation (he insists he never claimed to be John K Petre the millionaire, everyone just assumed he was) and he does get to live happily after, in his own quiet way.

I think the idea of making your central character an amnesiac is an interesting concept, but it means you never really know enough about him to be able to relate to him, and his character never seems to develop. Even when he regains his memory he remains remarkably colourless.

The novel was first published in 1925 (issued by Penguin 1947, number 633), but is set in 1953, which puzzled me – I thought perhaps it was going to turn out to be some kind of time shift story, and that would explain the memory loss, but this wasn’t the case. It’s not a vision of the future, like Brave New World, or Nineteen Eighty-Four, and the world in which it is set is exactly the same as the world which existed in in 1925, with the exception that cars, ships and so on are referred as rotors (Mr Petre – John K, not our Peter – is the Rotor King). This terminology is never explained, so it’s unclear whether Belloc envisaged a completely new method of powering transport, or whether rotor is merely a euphemism for motor, used perhaps to avoid any possibility of litigation.

Posted by Christine Harding at 10:41 am