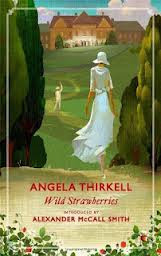 The Leslies, who star in Angela Thirkell’s Wild Strawberries, lead a charmed life in their beautiful ancestral home, cared for by faithful servants, and looked up to by local villagers. There is no shortage of cash, no nastiness, no rain, and everything is bathed in a golden glow. It’s all as sweet as saccharine and as frothy as cappuccino, but very enjoyable nonetheless, although it did leave me feeling a need to read something with a little more bite and substance.

First published in 1934 (a year after High Rising, which seemed sharper, and which I love unreservedly), it portrays the kind of world that Thirkell knew. It’s hard to imagine that world now, with its strict social codes and class structures and the deference of working folk towards those higher up the scale. For example, I’ll bet you wouldn’t find a local vicar these days hanging on to start his service until the arrival of the local gentry, but that’s just what happens here. Not only that, but when the Leslies do arrive (late), scatty Lady Emily takes a long time to settle herself and her family, and she continues to talk to them throughout the service.

Lady Emily, who heads three generations of Leslies, is delightfully dotty. Vague and forgetful, she is constantly in a muddle, always mislaying her possessions and getting hold of the wrong end of the stick in conversations. She is always drawing up complicated plans to organise the lives of her family, servants, visitors and villagers, in the belief the belief that she is helping them – but everyone ignores her efforts and goes their own way, just as they have always done. The blurb on the back of my copy (Virago, 2012), describes her as a matriarch, which I always think implies a woman of great force and determination, and Lady Emily is neither. She may interfere, but since no-one takes any notice, she does no harm, and she is incapable of imposing her will on others – indeed, for much of the time she seems to have little will of her own, fluttering from idea to idea, and from one activity to another, without ever settling. But she’s so warm and friendly, and kind and caring, that it’s impossible not to like her.

Her husband is much quieter and calmer, who tolerates his wife’s idiosyncrasies, and is occasionally exasperated by her actions, but the relationship between them is actually quite touching. We don’t see a lot of him, and we don’t see a lot of the two of them together, but there is genuine affection between them, and they still grieve for the loss of their eldest son in the First World War, and appear to support each other in their loss.

Their family comprises surviving sons John, a steady, hardworking widower, and idle, feckless David, who has an eye for a pretty girl but no intention of settling down, and their beautiful, placid daughter Agnes, as well as her three young children, and grandson Martin who, as the son of the dead eldest son, will inherit the estate.

Then there’s the servants: Nannie, Ivy the nursemaid, Macpherson the agent, Gudgeon the butler, Conque, Lady Emily’s French maid (universally known as Conk), and various others who make brief appearances but have no role to play in the story. And there’s a full cast of other characters, including the vicar; the Boulles (a French family who have hired his home for the summer); assorted villagers, and one of David’s friends, highly educated, cold-hearted Miss Stevenson, one of the few women to hold a responsible job in radio.

Wild Strawberries also features Mr Holt, a social parasite who spends his life sponging off the rich and famous, inviting himself to stay at their comfortable homes, and to be ferried around by their chauffeurs, enjoying their food and drink, demanding the attention he feels he deserves. He has built a reputation as a gardening expert (although he has no garden of his own) and it was this expertise which provided his opening into society, when he was younger and wittier than he is now. Thirkell gives us a rather cruel – and sad – picture of an ageing man, a bore and a sponger, who is no longer welcomed by people he thought were friends.

And, of course, there is pretty Mary Preston, the kind-hearted, penniless niece of Agnes’ husband, who has been invited to Rushwater (the family estate) for the summer, and promptly becomes infatuated with David, although Lady Emily and Agnes think she would make an ideal wife for John…

The plot, such as it is, is not strong. It’s another of those novels where not a lot happens, and the focus is very much on the small, everyday things in life, and the relationships between the characters, but that’s very much the kind of novel I always enjoy. Here the portrayal of the life led by the landed gentry in the early 1930s is superb, and there are some brilliant cameo portraits of the lesser characters, like the horrendous, overbearing Madame Boulle, who is convinced that everything French is best, and that she is always right (she reminded me of the German girl who once stayed with us on an inter-school exchange, with the difference, of course, that our little fraulein believed Germany reigned supreme).

In his introduction (which I looked at after I completed the novel), Alexander McCall Smith) compares Wild Strawberries to a Noel Coward play. Personally, I don’t think Thirkell is as witty as Coward, but as I can see what he means, because much of the dialogue is very mannered and stylised, and as I read I could see the story unfolding before me like a Merchant Ivory film.