While trawling around the internet I came across these… 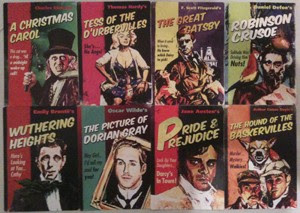 Classic novels and plays with pulp fiction covers!!! They’re not necessarily to my taste (I lust after those wonderful old Virago Modern Classics, with the dark green spines and paintings on the covers) but they are great fun. They’re bright, brash, colourful, lurid, gaudy, garish… even the edges of the pages are coloured.

This Pulp! The Classics collection is a new imprint from Oldcastle Books. According to the website, it ‘gives the nation's favourite classic novels original retro covers in a pulp fiction style - with a dash of wry humour’. The designs seem to owe a huge debt to popular culture, and the marketing blurb in the online catalogue is perfectly in keeping with the pulp fiction theme – and is an absolute hoot.

How about this for Alice’s Adventures in Wonderland, by Lewis Carroll (due out in September):

This cupcake as OFF HER HEAD!

What HAS happened to little Alice? Taking 'shrooms, hanging out with hookah smoking ne'er do wells and being dragged to court. That's gonna be one hell of a hangover!

Or this enticing account of Mary Shelley’s Frankenstein (think James Dean and you’ll get the picture). Actually I quite like the idea of the monster as a disaffected biker!


This Kid was born on the wrong side of the Lab...

Frankenstein’s monster is on the rampage; terrorising the locals, unleashing murderous hell… and reading novels in his spare time. Can his petrified creator stop this reign of horror before his girlfriend gets the chop. 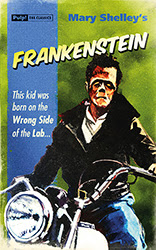 The front of Robert Louis Stevenson’s The Strange Case of Dr Jekyll and Mr Hyde includes a figure who bears an uncanny resemblance to rock star Alice Cooper (though it could equally well be said that Alice Cooper bears an uncanny resemblance to a character from a horror story), and another who I guess is Ozzy Osbourne. Romeo and Juliet are ‘Too wild to live, too young to die’; Tess of the d’Urbervilles is a busty blonde babe with a bottle of booze and a heart set on revenge, and Scrooge is a somewhat crazed Alastair Sim – a suitable tribute I feel, since he played the miser in the 1951 film. 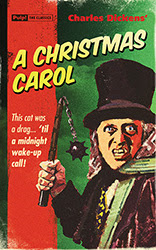 This cat was a drag... till a midnight wake-up call.

Christmas?! What a load of Humbug. Mistletoe and Wine just don't do it for Scrooge; he's a workaholic miser with an attitude problem. If he doesn't change his ways, he'll end up with no friends and Tiny Tim won't last the year. Let's hope some spooky night-time visitors can put the jingle back in his bells!

Then there’s Darcy, who’s escaped the constraints of life in Georgian England and stares out at us with piercing eyes and a cigarette dangling from his lips. And summing up Pride and Prejudice the publishers tell us:

Mrs Bennet is on a mission to marry off her five daughters to rich men.
Enter, Mr Charles Bingley and his rather fit friend, Darcy. Love, loathing and bittersweet romance follow…

Even Jane Austen couldn’t argue with that statement. It pretty much says it all and, surprisingly, it’s actually quite accurate. In fact, all the book blurbs are cleverly written, encapsulating a few salient facts in very few words, using modern, slangy idiom. And, before you ask, the books appear to contain the original, unabridged texts. It’s just the packaging which is different – and perhaps that will attract new readers who might be put off by a more conventional and reverential approach. 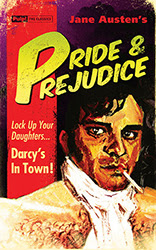 So what does anyone else think? Do you like them? Do you think they might attract more readers? Or do you think covers should have images more directly linked to the story?
Posted by Christine Harding at 1:00 am