The Wine of Solitude

The Wine of Solitude is a sad sort of book, and although it ends on a note of hope that feeling of sadness remains, because we know author Irene Nemirovsky died in Auschwitz, and it’s all the more poignant since she based the story of Hélène Karol on her own lonely, unhappy childhood, and her troubled relationship with her mother.

Hélène lives in the Ukraine, with Boris, her passionate, distant father, Bella, her beautiful, uncaring mother, and Mademoiselle Rose, her French governess, who is the only person to love the child. Bored Bella has other interests. With her claw-like nails and her thin, red mouth (like a line of blood), she dreams of Paris, where she can be alone and free.

Looking after the house and her child filled her with horror. She was only happy in a hotel, in a room, with a bed and a trunk, in Paris […]

To hold a man tightly in her arms when she didn’t even know his name, or where he came from, a man she would never see again, that and that alone gave her the sharp thrill of pleasure she desired.

Hélène also dreams of being free in Paris – free to be a normal child, untrammelled by the restrictions of her oppressive middle-class environment and her unhappy home.

Her penniless mother married her Jewish father because she knew he would make money. And so he does – though whether from his business interests or his gambling gains it’s hard to tell. For years he’s on a roll. He makes millions. The family move to St Petersburg, get caught up in WWI and the Revolution, escape to Finland, and move to Paris. Life is a mad whirligig of dinners, dances and parties. Boris Karol decks his wife with expensive jewellery and fabulous frocks, but somehow there is a sense of impermanence, and they have no real friends, just a circle of hangers-on.

Then there’s Max, Bella’s lover, 15 years her junior, living the good life on Karol money. And what of Hélène, who loves her father and hates her mother, but is neglected by both? Friendless, she stands apart from the world, watching and listening. In Russia she begins to write about what she sees and hears, which provokes a terrible row with her mother. In Finland she falls in love, a brief, tender episode.

And in Paris she sets out to make Max falls in love with her. As she changes from child to woman she exults in her power, but never softens her hatred for him and her mother. Even so, she becomes fascinated by him. At this point it would have been all too easy to let Hélène pay her mother back for all the years of cruelty and neglect by marrying Max. But Nemirovsky is far too good a writer for that, and in a stroke of sheer genius she allows Hélène to exact a far more terrible revenge by rejecting Max and dismissing him from their lives.

Bella is a monster, obsessed with keeping her youth and her looks, her life ruled by diets and beauty treatments. She needs money (and plenty of it) but I don’t think she needs love. She’s driven by lust rather than love – as long as she has a young lover she feels young and alive, like some kind of evil fairy from a folk tale, sucking the life out of her lovers so she can extend her own her own youth. Her husband adores her, and will admit no faults: if he does, his world will come crashing down. He has no eyes for anyone else, not even his daughter. He’s as disinterested in her as Bella is.

According to the blurb on the back, the book has been been described as an end-of-innocence story, but I’m not sure I agree. Hélène is never under any illusions about the adults in her life. What she lacks is self-knowledge. But gradually she becomes painfully aware that she has inherited character traits from the mother she hates, as well as the father she adores.

By the end of the novel she is able to walks out of her old life and into the new, head held high, unafraid, because she is young and full of hope, for the future, and the difficulties of her odd childhood have strengthened her and made her what she is.
But the final sentence stays in the mind, because it must have seemed so uplifting when it was first published in 1935, and no-one knew of the horrors that lay ahead:

She stood up and at that very moment the clouds parted , between the pillars of the Arc de Triomphe, blue sky appeared to light her way. 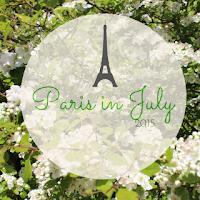 Posted by Christine Harding at 3:27 pm