I Want To Be A Book-Handler...


Edited May 10: By the way, .I forgot to mention that over on Vulpes Libris in April last year Hilary wrote a wonderful review of The Best of Myles, with more information about him , and a lovely, clear overview of his work (sorry Hilary). You'll find her post here. 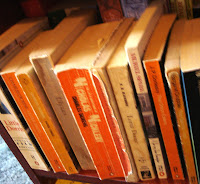 I’ve posted this in the Essay Reading Challenge being run by CarrieK at Books and Movies here - I’m not sure if newspaper articles really count as essays in the strictest sense of the word, but I think many modern columnists could be regarded as essayists. And, since Flann, Brian, Myles (call him what you will) is most definitely an Irish writer, I’ve posted it on the Ireland Challenge 2012 which also be organised by CarrieK on this link.
Posted by Christine Harding at 5:30 pm