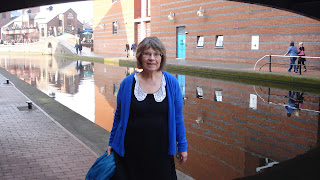 I was going to write a book review, but we went to Birmingham to meet my younger daughter and her boyfriend for lunch, and spent the day wandering around the Rag Market, walking along the canal, and mooching around the city’s Museum and Gallery, where we visited the Staffordshire Hoard, which we have seen before, but was well worth another look - the intricate work on these tiny pieces of gold is just incredible. 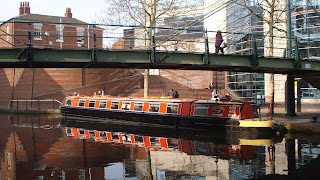 By the time we got home I was so tired, and my feet hurt because I wore new shoes (there is a moral in everything, as the Duchess told Alice, and the moral of this is that one should never wear new shoes when walking around a city). Anyway, I never got round to writing anything properly, so here are some Saturday Snapshots, some of which were taken today, and some on my last visit, when the weather was still sunny, and there were lovely reflections in the water. 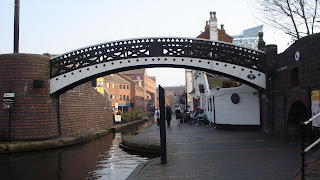 Birmingham is supposed to have more canals than Venice, but I am not sure if this is actually true, or merely some kind of urban myth. At any rate,  the  Worcester and Birmingham Canal at Brindley Place and the Gas Street Basin (where it meets the Birmingham Canal Navigations Main Line) is one of the nicest spots in the city, and one of the few places which seems to have kept its character and from development. 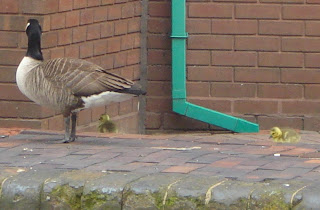 There are boats, and bridges, and tunnels, and some of the old buildings (including the WBC Company's headquarters) are still there. They may have been revamped, and turned into eating places, but at least they have been preserved and are being used. And there's a surprising amount of wildlife on the water and alongside it, including this Canada goose and two tiny goslings, which we spotted on the opposite bank, and you can just make them out in the photo, if you squint a bit - I need a much better camera I think.