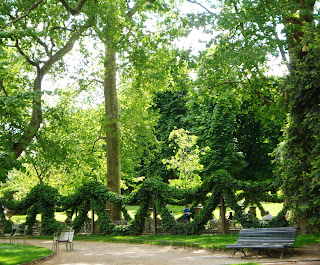 This time last weekend I was in Paris – my mother and I enjoyed a four-day break there, and noticed once again how green the city is, and how much the French love their parks.  Everywhere you go there are streets and squares lined with trees, and there are beautiful, tiny parks and public gardens hidden away in the smallest of spaces, with gravelled paths, statues, fountains, flowers, trees and benches. Then there are the large parks, like the Tuileries, the Bois de Boulogne, the Jardin des Plantes, and the Jardin du Luxembourg, with their grand planting schemes, sweeping vistas, wooded areas, palaces, cafes, glasshouses and even (in the case of the Jardin des Plantes) a menagerie, or zoo. Whatever their size, they are all wonderfully quiet and incredibly clean. There is no litter blowing around, no food containers festering on the ground, and no dog poo. 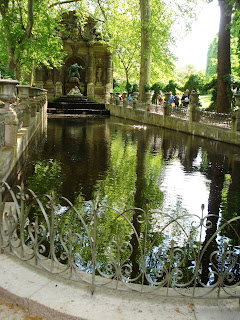 Today’s photos were taken in the Jardin du Luxembourg which is one of our favourite places, and always seems tranquil and peaceful. There were drifts of delicate, pale pink forget-me-nots,  and those strange rows of trees that look like giant hedgesWe sat on our chairs, soaking up the sunshine, and watched the world go by. Children sailed boats on the ornamental, octagonal pool, while visitors admired the colourful carpets of flowers in the parterres, and the French sat quietly eating their lunch, reading, or just relaxing. But many Parisians are much more energetic, and they come here to jog along the pathways, or do their exercises beneath the trees – how much nicer to be out in the fresh air, rather than stuck in a gym. 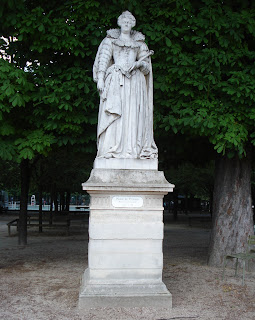 This park was created by the widowed Marie de Medicis (she was married to Henri IV). Homesick for her childhood home at the Palazzo Pitti, in Florence, she had a palace and garden created like those she had known and loved in Italy. Her palace, with its terraces and balustrades, now houses the French Senate, and the charming Medici Fountain is still one of the most popular features, although Marie’s grotto and fountain now include a pond and statue. The area was ignored for well over a century, but was restored and enlarged following the Revolution. 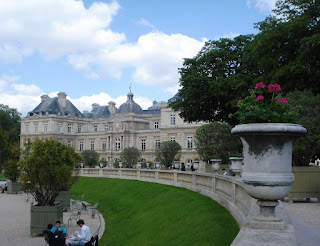 It’s a fabulous place, full of flowers and trees, with a kind of bandstand for musical events, and a théâtre des marionnettes. The gardens also have around 100 statues including one of the Statue of Liberty which is supposed to be the model sculpted by Bartholdi while he worked on designs for his iconic New York artwork. 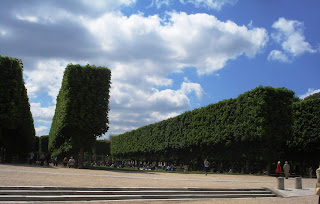 And Marie de Medicis is not forgotten, for she features in series of statues of former French queens, saints and famous women. Actually I always feel a little sorry for her., though I’m not sure whether she deserves sympathy. She is portrayed as being a pleasure seeking spendthrift, who didn’t have the best interests of France at heart. But life in the French court can’t have been a bundle of laughs. She married Henri in 1600, when she was 25 years old, and immediately became embroiled in very public quarrels with his mistresses, whom he refused to give up. At the same time she befriended her predecessor Margaret of Valois, who had been banished following the annulment of her marriage to Henri. 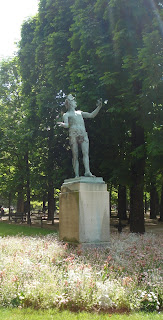 Marie was not crowned Queen until 1610, on the day before Henri was assassinated, and many people thought she was complicit in the murder. Her son, the future Louis XIII, was only nine, so she became regent, and clung to power after he reached his majority, but she was an ineffective ruler, unable to command support
from the nobles. 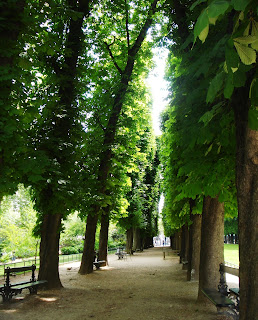 Eventually the nobles rebelled, and Louis, seizing the chance to take control, had her imprisoned. Mother and son were reconciled, but not for long, and she was exiled, fled to Brussels, then moved on to Amsterdam, and Cologne where she died in 1642, far from her beautiful garden. 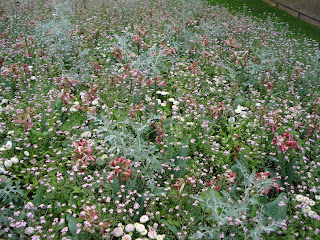