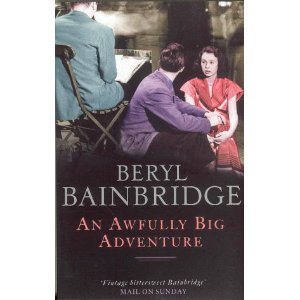 Sixteen-year-old Stella has a job as an assistant stage manager with a repertory company in Liverpool. As far as work goes, her options are limited – it’s the theatre or Woolworth’s, because she failed her mock school certificate and her school won’t let her stay on because she has the brains, but not the application.
She’s the central protagonist in Beryl Bainbridge’s An Awfully Big Adventure, and is one of those curiously disassociated (but very naïve) girls one sometimes finds in novels, and there is some kind of mystery about her. When the novel opens we know something terrible has happened, that she seems in some way responsible, and that she is upset, but you have to wait until the end to discover what has taken place in the recent – and distant – past.
It’s a darkly funny novel, with some wonderfully drawn characters, especially the actors at the theatre, and the backstage crew. Bainbridge can paint such a full picture of a person, in very few words, and is wonderfully understated with her barbed comments. Take lovelorn actress Dawn Allenby, who is ‘a plain woman with the faintest smell of spirits on her breath, even at ten o’clock in the morning’. And a little later we are told ‘there was nothing wrong with Dawn Allenby apart from her love of beauty, an affliction she was ill-equipped to fight’.
Stella is equally ill-equipped to cope with life, as she has no idea how other people feel, and cannot comprehend the complicated loves and losses endured by the theatre folk. Nor does she realise that there are times when telling people the truth can only cause pain. She develops a passionate crush on Meredith Porter, the director, and is blissfully unaware that he is not interested in women,
She lives with her Uncle Vernon and Aunt Lily, but resembles no-one they know. As Vernon says: “She’s not one of us.”  She’s very self-possessed (‘she had always had a precise notion of what was expected of her,’ Bainbridge writes. , manipulative and, according to Vernon, dramatises everything. Now she’s started work and has a new life she’s ashamed of her aunt and uncle and the down-market hotel they run, and wants as little to do with them as possible. And she keeps making phone calls to her mother (Lily’s younger sister, who was once a telephonist), which is strange because no-one knows where her mother is.
But as the story progresses we see just how vulnerable Stella is, for when she was a baby her single mother abandoned her in her cot, leaving a withered rose on the pillow, and a row of night-lights set along the floor.


Things come to a head while the company is engaged on the Christmas production of Peter Pan. The actor playing Hook breaks a leg, and PL O'Hara, who performed at the theatre many years earlier - before moving on to bigger and better things - agrees to step into the breech. Stella lets him seduce her, hoping it will make Meredith take notice of her, and O'Hara (we never know his first name) becomes more and more obsessed her, while thinking of his lost love from long ago, a girl he knew as Stella Maris. So the stage is set for a terrible discovery...


Throughout the novel there are references to the past, and the way we perceive it, and its effect on the present, and to death - Peter Pan's 'awfully big adventure'. Early on in the novel Bainbridge, talking about Uncle Vernon, says: “It had bought home to him how unreliable history was, in that the story, by definition, was always one-sided.” At the theatre, Meredith tells Stella: "the dead are still there, as are those we think we love, just around the corner... waiting to be caught up with." And O'Hara warns: "We can never be sure when we will be consumed by the past."


Like According to Queeney, the characters in An Awfully Big Adventure are all lonely people looking for love - but they are looking in the wrong place. They want to be needed, but somehow the object of their affection is unable to respond. Reading this I could see similarities with Muriel Spark - the understated style, the dark humour and the wit.


I read this for the Beryl Bainbridge Reading Week being hosted by Anabel at http://gaskella.wordpress.com/ and will definitely be reading more Bainbridge, as a week was not long enough  for an exploration of her work. 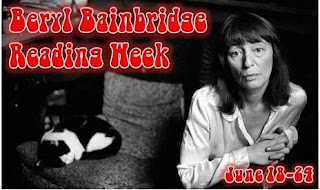 Posted by Christine Harding at 11:00 pm