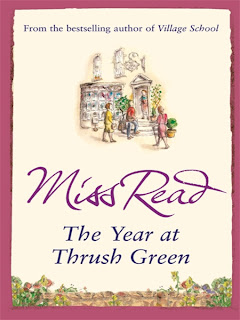 Following the death of Miss Read (the nom de plume of Dora Saint) earlier this year, I realised I had never read any of her work so, deciding to remedy the situation, I headed for the library where I found Changes at Fairacre and The Year at Thrush Green.  And what did I think? Well, I wouldn’t rave about them, but they were enjoyable, if a little like wallowing in a bath of warm treacle. However, both are later books (written in 1991 and 1995 respectively), and I do wonder whether I should have started at the beginning, which might have provided a better introduction to the characters and settings of both series. I suspect that if you read several, you’d get to know the people and places, and could become quite fond of them, but I think they are what I would call ‘comfort’ reading.
Miss Read – or perhaps I should call her Dora Saint – must have drawn on her own experiences when she wrote her stories of village life. Born in London, she was brought up in the country, worked as a teacher, and after marriage lived first in rural Oxfordshire, then in Berkshire. She started writing after the Second World War, when her daughter was young, producing pieces for various magazines, including Punch, and working on scripts for the BBC’s education service.
Her first novel was published in the mid-1950s, and she continued writing for more than 40 years, but the world she portrays seems to have changed little in that time. And that, perhaps, is the secret of her appeal, for she shows us an old-fashioned, slower world, with old-fashioned values, like decency and honesty.
Fairacre and Thrush Green both feature tightly-knit, feudal village communities, where everyone knows their place, and it would be easy to dismiss the characters as caricatures (and, quite apart from any literary criticism, my socialist principles about class and society came screaming to the surface).  Everyone knows everyone else’s business, but they provide help and support when things go wrong, which makes for a very cosy and comforting view of life.
There’s little, if any mention, of world events or politics, and you would be pushed to tell which decade of the 20th century was the setting for either of these novels (but the same could be said for a great many other novels which I greatly admire, so that’s an unfair criticism). Saint’s characters are concerned with small, mundane things, which I think shows that she had a far greater understanding of human nature than she is sometimes given credit for. When I was reporting people often ignored major issues, and were much more interested in things like missing cats and school sports days.
And Saint’s recognition that people’s view of events is governed by the way they are affected results in some wonderful throw-away lines. In The Year at Thrush Green, while a microphone is being adjusted, an elderly woman says: “A friend of my dad’s was electrocuted with one of them. The power was off for three hours. Couldn’t boil the kettle.” I just love that – it’s exactly how people react to a tragedy like that, making the lack of hot water more important than the death.
Saint is also good on the relationships between residents, and the way old resentments can smoulder away beneath a veneer of a politeness – the petty rivalries and jealousies revealed at the Flower Show and Fete (in Changes at Fairacre) are quite wonderful, and you know exactly what you are dealing with when you realise the class for quiches is considered to be an innovation! 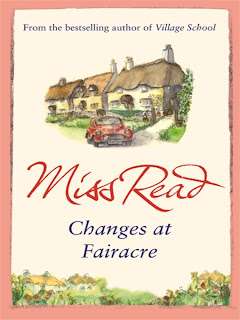 She has some fascinating accounts of country customs, beautifully observed descriptions of the weather and wildlife, and tales of the past from older residents. However, Saint offers more than rosy nostalgia for times gone by, for death, illness and blighted hopes occur here just as they do in the real world, along with modern problems, which may not loom large, but are present nevertheless. Falling numbers coupled with budget cuts mean Fairacre School is threatened with closure, and both books deal with unemployment, rural poverty and crime.
Overall I would say Saint writes with a great deal of warmth, love and sympathy. She’s never cynical and never satiric or ironic. She can be funny, and sad, and very irritating, and whilst she may not have won me over completely, in the right mood, on the right day, I think I could curl up reasonably happily with one of her novels.
*You can hear 'Miss Read'  interviewed by Roy Plomley in 1977 on the Desert Island discs archive at
http://www.bbc.co.uk/radio4/features/desert-island-discs/castaway/9c20d7ef#p009mzkz . I was delighted to find her choice of book was the wonderful Diary of a County Parson 1758-1802, by James Woodforde, who is mentioned in Changes at Fairacre - Miss Read is reading Virginia Woolf's essay on the clergyman at the time of the death and funeral of her old friend friend Dolly Clare.
Posted by Christine Harding at 2:38 pm