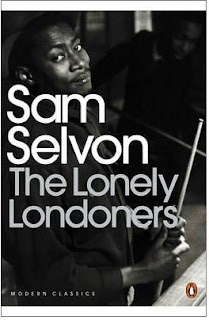 On a grim winter evening, when it had a kind of unrealness about London, with a fog sleeping restlessly over the city and the lights showing in the blur as if it is not London at all, but some strange place on another planet, Moses Aloetta hop on a number 46 bus at the corner of Chepstow Road and Westbourne Grove to go to Waterloo to meet a fellar who was coming from Trinidad on the boat-train.
The fellar is Henry Oliver, nicknamed Sir Galahad, who has no luggage, and is clad only in a light tropical suit – but claims he doesn't feel the cold. He's one of characters who drift through The Lonely Londoners, by Sam Selvon, talking of home while they look for a room to live, a job, food, drink, and women.
I spotted this slender book in the tiny classics section at my local library, picked it up to have a browse (I'd never heard of the author before), and was intrigued. It's difficult to know how to describe it it, because you can't categorise it. The characters are wonderfully drawn, but there's no plot, and it doesn't seem like a novel in the conventional sense. Although various incidents are described, it's not really picaresque, and it's not quite stream of consciousness either. However, one thing is certain, I thought it was one of the most poetic pieces of writing I've come across. It's written in a kind of Creole, or patois, following the rhythms of Caribbean speech, but is easy to follow (unlike the speech patterns of the slaves in Andrea Levy's 'The Long Song', which I found stilted).
This was written in 1956, eight years after the first Jamaican passengers disembarked from the Windrush. The author, who was born in Trinidad, was a journalist, novelist and poet, who became known as the founding father of modern black writing in London. Here he tells the tale of the early immigrants, lured to the Mother Land by the promise of a better life. There's no back story to their lives, and no resolution: they arrive, they dream of home, they stay. Nor does he judge his characters, and neither should we: they simply are, and it is not up to us to think they should be other than they are.
London is an unreal city (shades of TS Eliot here I think) where Moses, a veteran black Londoner, shows newcomers how to survive in this alien environment. He is the central figure, and we see life largely through his eyes.
'The only thing,' Galahad say when they was in the tube going to the Water, 'is that I find when talk smoke coming out of my mouth.'
'Is so, it is in this country,' Moses say. 'Sometimes the words freeze and you have to melt it to hear the talk.'
That last sentence is wonderful, and the men, and their friends, certainly encounter some frozen words in a land where there is no heat from the sun, and where people are suspicious of these newcomers. Racism is already a very real threat, and Galahad makes an impassioned plea for tolerance, that recalls Shylock's speech in 'A Merchant of Venice'.
Lord, what it is we want that the white people and them find it so hard to give? A little work, a little food, a little place to sleep. We not asking for the sun, or the moon. We only want to get by, we don't even want to get on.
Galahad, a sharp dresser, with an eye for a pretty woman, finds that when things are going well, life is good.
This is London, this is the life Oh Lord, to walk like a king with money in your pocket, not a worry in the world.
But life can be hard and cruel. One cold winter's day, when he has no money and no food, he kills a pigeon, and shares a meal with Moses. Eesewhere, one of their friends traps gulls to cook and eat.
At times there's an almost Biblical feel to the language and action, for Moses, Galahad, Cap, Harris, Bart and Tolroy (and his large extended family who join him in England, uninvited) are exiles in a strange land. The men support each other. They chat and spin tales, and quarrel, and fight, and chat some more. The years pass, and though they still talk of returning home they know, and so do we, that even if they could afford it they wouldn't go because, for all its faults, they have fallen in love with London.


What it is that a city have, that any place in the world have, that you get so much to like it you wouldn't leave it for anywhere else? What it is that would keep men although by and large, in truth and in fact, they catching their royal to make a living, staying in a cramp-up room where you have to do everything – sleep, eat, dress, wash, cook, live. Why it is, that although they grumble about it all the time, curse the people, curse the government, say all kind of things about this and that, why it is, that in the end, everybody cagey about saying outright that if the chance come they will go back to them green islands in the sun?
Posted by Christine Harding at 1:00 am