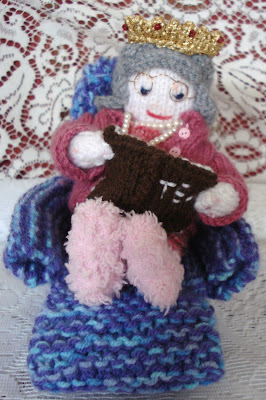 And now for something completely different for this week's Saturday Snapshot... a Not The Jubilee Knitted Queen! I spotted the pattern in Fiona Goble's Knit Your Own Royal Wedding (published last year by Ivy Press) and decided she would be perfect as Alan Bennett's book-loving monarch in The Uncommon Reader, but I altered her a bit.
I changed her face and hair, because when I followed the instructions she looked like an Oompa Loompa, from Willy Wonka and the Chocolate Factory (the film starring Gene Wilder, that is, not Dahl's book, or the Tim Burton movie). And I made her a glittery, golden crown, studded with red jewels, because otherwise how would you know she is the Queen? In addition she has a book, and is wearing spectacles, so she can read it, and pink, fluffy slippers instead of shoes. because, she says, one has to take care of one's feet when one spends so much time standing and walking! Her cardigan is a little old and shabby and has probably been worn on too many visits - read the book and you'll see that her maid threatens to outlaw just such a cardigan. 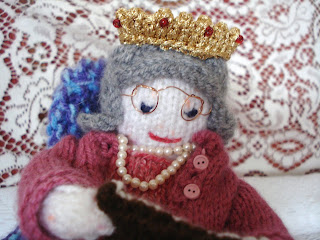 Here, I'm afraid, my imagination took over, for this is not her usual chair. Ma'am as she is known around the Palace (to rhyme with jam or ham rather than charm or farm) prefers a nice upright seat, with a firm back, and likes to keep her feet on the ground. But her favourite chair was sent away for conservation and came back with a shiny, slippery satin seat, to match the gilt party chairs in her office. Her private secretary explained, rather sternly, that the chair had been restored, at great expense, to its original state, and is now an object of desire, much admired by those who know about these things. So the Queen gave a reception for the restorers and conservators, to thank them for their work at her various homes, and to show her gratitude she insisted that the chief conservator must sit on her own special chair, where he spent an uncomfortable couple of hours sliding around on its hard, slippery surface. The Queen smiled. If one thinks about it, she thought to herself, though it may be the kind of expression not suited to polite society, there is more than one way of skinning a rat.
Early the next morning the chair had disappeared, and in its place was this very battered and squashy 'recliner' belonging to the chief conservator, who likes to relax in comfort, if not style. Her Majesty, who is not given to lolling about, is disconcerted each time the back drops down but, as she says, one cannot be rude, especially when the chief conservator is 'unrestoring' her own chair. He did offer to put new covers on the gilt party chairs as well. However, the Queen said than you very much, but no thanks, And she smiled again, because one finds that those particular chairs discourage unwanted visitors from remaining too long. 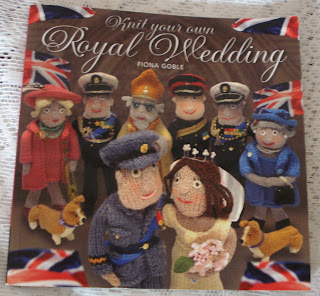 I had such fun knitting the Queen (not not to say making a story to go with her) I'm now producing corgis who will chase and chew books. And I've some orange wool in the scrap bag, so I could knit ginger-haired Norman, the kitchen assistant who advises the Queen about books and reading, and is promoted to being a page! Reading this through, I fear you will all think that a) I don't have to do with my time, and b) I must be totally mad (and you'd probably be quite right). But should anyone want to try their hand at a knitted Royal, it's not that difficult – I'm only a novice knitter, but I managed quite well, and the pattern can be adapted fairly easily. And if you've never read Alan Bennett's The Uncommon Queen, it's very funny, and you can see my review here.
For more Saturday Snapshots see  Alice's blog http://athomewithbooks.net/
Posted by Christine Harding at 1:00 am