Ducks on the Ice

Well, here we are, talking about the weather again! It's only a few weeks since normal life was halted by floods. Now everything is disrupted by snow, which may be no great shakes to those of you living in colder climes, but is the main talking point here in the UK, where we never seem to be prepared for anything - the weather always seems to take us by surprise - whether it's wind, rain, snow or sunshine! So really, my Saturday Snapshot photos this week could only be weather pictures. 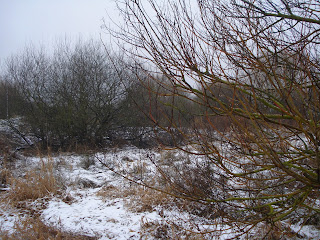 In fact, weatherwise it's been a bit of an odd week. On Monday I woke to find everything covered in a fine layer of snow, not very deep, but definitely more than a sprinkling. We had snow, sleet, rain and more snow, but it was that wet kind of snow, which doesn't settle. 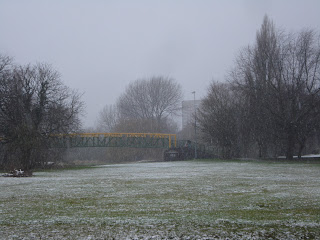 I went for a walk across the Castle/Pleasure Grounds, round by the side of the Snow Dome (who needs it in weather like this!), across the grass to the lake to look at the swans, back under the roadbridge, and then over this nice green and yellow bridge to the out-of-town shopping area. Thanks to the boots, my feet were warm and dry, but the rest of me was so cold and wet I bought new gloves and a woollen snood to try and get warm, then walked into town and caught a bus home! 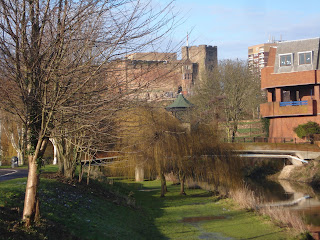 On Tuesday, as you can see in the picture above, the sky was blue, and the sun shone, even if it didn't give out much warmth, and there wasn't a trace of snow or ice. 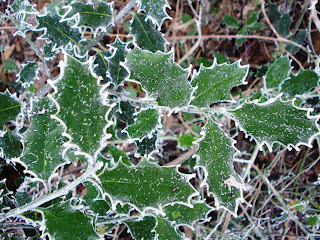 But on Wednesday the temperature dropped, and a heavy frost turned the landscape into a sparkling winter wonderland. This holly looked a variegated species, but the white around the edges is frost, and the little speckles on the surface (which look like hairs)  are little spikes of frost. 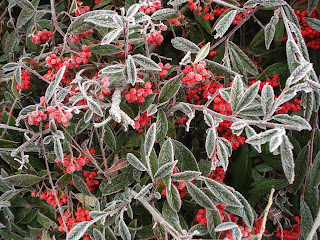 And I love way the berries and leaves on the plant pictured above were covered in frost as well, looking like a picture on a Christmas card. 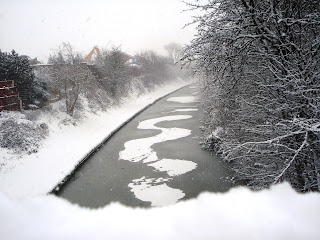 Thursday was cold and dull, but on Friday winter set in with a vengeance - it was a white-out! It snowed... and snowed... and snowed... kids were sent home from school, buses and trains were cancelled, roads were impassable... so I braved the elements and walked as far as the canal, where I peered over the snow-covered bridge to take this picture because I was so intrigued by the winding shape of snow on the centre of the frozen water. I wish I knew why it had settled like that! 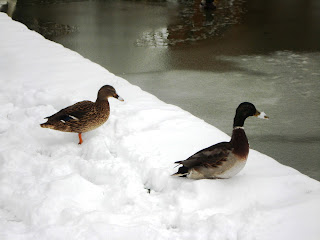 Today it's not quite as cold, and it hasn't snowed, but there's no sign of a thaw and, according to the forecast, there's more snow on the way. But we were determined to get some fresh air and enjoy the wintry scene, so we went for a short walk along the towpath. The canal was frozen, except for the areas around the bridges, and the path was very snowy, but not icy or or slippery, so it wasn't too bad underfoot. I couldn't resist taking pictures of ducks in the snow and on the ice. 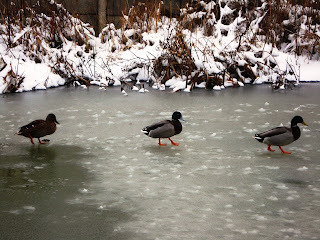 More Saturday Snapshot pictures are hosted by Alyce at http://athomewithbooks.net/

Posted by Christine Harding at 4:14 pm