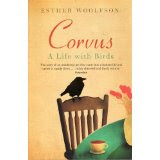 Generally speaking, ravens, rooks and crows have a pretty bad press. Think about their literary appearances and you’ll find they are usually rather sinister – what about Edgar Allan Poe, or traditional ballads like The Twa Corbies? And Ted Hughes view of the species is pretty bleak really. Not only that, but to the untrained eye one black bird looks much like any other black bird (although I am pleased to say I can recognise a blackbird, and yes, I know it is a different species altogether, but I still feel this is quite an achievement).

Anyway, in Corvus, A Life with Birds, Esther Woolfson changes all that. It turns out that Corbids (the Latin name for the genus which includes magpies and jackdaws, as well as ravens, rooks and crows) are friendly, intelligent, and highly individual.

Woolfson and her family start out with conventional pets, like rats and rabbits, but somewhere along the way birds take over their lives. It starts when her husband’s grandmother’s neighbour is looking to re-home some of her doves – birds which turn out to be much more aggressive than their image suggests. So, where does their association with peace come from, I wonder?

Next up is Bardie, a young cockatiel bought as a birthday present for one of her daughters, and gradually the house is filled with a succession of the waifs and strays of the avian world, as friends and neighbours hand over injured and abandoned birds. Over the years she learns about the birds she cares for, and records her observations of their behaviour, so the book is part memoir, part natural history. But it’s also about the way birds change her view of humanity and her perception of the world and mankind’s place within it. She writes:

Of them all, it has been the corvids, the rook, magpie and crow, who have altered forever my relationship to the rest of the world, altered my view of a hierarchy of form, intellect, ability, my concept of time. The world we share is broad, the boundaries and differences between us negligible, illusory.

And she also tells us:

We progressed together, rook and human, and the knowledge, for the humans at least, was revelatory, mind-expanding, world-expanding.

Woolfson constantly wrestles with her conscience as tries to decide whether her rescue birds should be released back into the wild, and she never sees any of the creatures as pets. She stresses that she is not a bird-keeper or a bird-owner. Nor is she an ornithologist, a biologist, a twitcher or a birder. She rejects the suggestion that she is an ‘amateur domestic ethologist’, but  admits there is no title to adequately describe her role. Trying to explain, she says:

Chance, a single moment, the confluence of fallen bird and receptive human, has changed me from observer to something else, something I can’t even name: adoptive parent, housemate, beneficiary.
It’s the birds themselves who take centre stage. They have likes and dislikes, exhibit pleasure and terror, and express their desires as ably as any domestic cat or dog. Many of them speak, or at least mimic humans, and there seems to be no way of knowing for sure whether there intelligence behind their utterings, but it would be nice to think there is. And the corvids all create caches of food scraps, objects that take their fancy, and shredded paper, which can cause the occasional domestic disaster, and means valued documents and books have to be kept out of their reach.

Flying through the pages are Bardie the cockatiel, with his extensive vocabulary and Ziki, the crow who never makes a sound, but enjoys listening to Radio 3, especially high sounds, early music, and the human voice. Then there is Max the starling, and Spike, the adventurous magpie. But above all there is Chicken (short for Madam Chickeboumskaya) the rook, as playful and demanding as any young child.

It’s one of those lovely, meandering, highly personal books that takes a subject and runs with it until another thought intrudes, and off Woolfson goes again, on another leisurely stroll through myths, stories, fairy tales, natural history, the way various birds have been viewed throughout the centuries, and her own thoughts on life. The book is packed with facts about the way birds feed and move, their flight feathers, nesting instincts and brains – and it soon becomes apparent that use of the word ‘bird brain’ as a term of derision is doing birds a terrible injustice.

But the book is never dry or dull, and Woolfson has a sense of humour, and a way with words that breathes life into the facts. The strongest image that stayed with me was her description of rooks:

They were all, as Chicken would grow in time to be, of sober mien, elegant of dress in well-tended black (except in summer when moulting renders them grey-edged and unkempt) with neat polished feet like tight, shining boots, somewhere between eighteenth-century Scottish minister (Henry Raeburn’s ‘Skating Minister’ perhaps) and wealthy, black-clad, fashionable 1930s Parisian lady of distinguished years.

I just love the picture it conjures up, of a rather portly rook, strutting along with a self-important and self-satisfied air. It’s not the way I would usually think about a rook, but this book will blow away all your previous ideas about corvids (and other birds) and make you take another look at them.

Posted by Christine Harding at 12:58 pm