The Making of a Marchioness 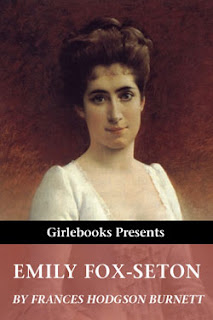 I may have said this before, but I’m a sucker for fairy tales and happy endings, and Frances Hodgson Burnett’s The Making of a Marchioness ticks all the right boxes – kind, gentle heroine in straitened circumstances marries her prince (or, in this case,  a marquis), and survives danger (in his absence) to live happily ever after. Obviously, there’s more to it than that. Our heroine, Emily Fox-Seaton is:

A woman of good blood and good education, as the education of such women goes. She had few relatives, and none of them had any intention of burdening themselves with her pennilessness.

Left alone after her mother’s death, she makes her own way in the world. By the time we meet her, aged 35, she is living in one room, which she has decorated as stylishly as she can with very little money, and scrapes a living by doing jobs for wealthy people – writing their letters, sorting out accounts, finding reliable servants, and sourcing clothes and other items. She may not have much in the way of material possessions, but she has the gift of finding happiness in small things, and is rarely cast down by her circumstances. She is good, kind and humble, not particularly clever, but practical, unafraid of hard work, and willing to help anyone.

A little kindness from anyone, a little pleasure, or a little comfort, made her glow with even-tempered enjoyment.

When one of her clients, Lady Maria Bayne, invites her help out at a house party in the country, Emily is delighted. Among the guests is Lady Maria’s nephew, the Marquis of Walderhurst, a kindly man who is unremarkable in every way, but for the fact that he is fabulously wealthy. Since he is a widower, girls are lining up to marry him, but it is Emily’s comfortable - and comforting - presence that he wants. She accepts him partly, I think, because she is about to lose her home and has finally realised how bleak her future will be. But she is so grateful to Lord Walderhurst for proposing to her that she promptly falls head over heels in love with him.

Once married, you would think all will be well, but this is a Victorian-style melodrama, and consequently there is a dastardly villain determined to spoil the couple’s idyll...  for Lord Walderhurst’s heir, the dissolute and improvident Captain Alex Osborn, fears the marriage will threaten his inheritance. When the marquis is called away to India on an unspecified government mission, Alex wages a campaign of terror against Emily (who is now pregnant), aided and abetted by his discontented wife and her sinister ayah. There are unexplained accidents and odd incidents. Emily’s sleep is disturbed by the feeling that someone is in the room, watching her, and her life, and that of her unborn child, are in jeopardy... I won’t reveal what happens, except to say to say the plot fairly races along to the requisite happy ending, at which point I heaved a sigh of satisfaction.

In many ways it’s not too dissimilar to my childhood favourites ‘The Secret Garden’ or ‘The Little Princess’. There’s the Indian connection, which looms large in all three books, and the fact that while her husband is away Emily is on her own, just as Mary Lennox and Sara Crew are on their own. And there’s a kind of spiritual or psychic element – when Emily hears her husband’s voice during her illness, it recalls how Colin’s father only returns home after his dead wife calls him in a dream.

It may not be the greatest literature in the world, but it’s great fun, and I really enjoyed it. I thought Emily was very believable – she’s one of those rare, modest people who never push themselves, only see the good qualities in others, make the best of any situation, and always manage to find the right words and actions to make people feel better.  If you gave her a glass half-full of water she would be delighted, unlike those of us who would moan that the glass wasn’t full, and say that in any case we would have preferred tea, or milk, or orange!

The book is written with warmth and humour, with just the right amount of menace and suspense, and Francess Hodgson Burnett is a much sharper observer of human nature than some people give her credit for. And, silly though it sounds, I thought she was good on domestic detail - she made me see the rooms, and gave the most intricate descriptions of women’s dresses and hats.
Despite the drama, her approach is fairly light-hearted. This is, after all, a feel-good book. But, as with many other novels written at the end of the 19th or start of the 20th century, it does make you realise how few options were available to women, how difficult it was to be independent, and how much a good marriage could ensure security for them and their families. Surprisingly, perhaps, Frances Hodgson Burnett shows that life could be as difficult for ‘lower class’ women as it was for those of higher social status. Emily’s landlady, Mrs Cupp, and her daughter Jane Cupp, may look up to Emily because she is a ‘lady’ but, just like her, they are adrift in the world, without a protector, doing the best they can to get by.

‘The Making of a Marchioness’ is available from Persephone, but I got my copy from Girlebooks, and it’s split into two sections, since the early chapters, taking us up to the proposal, were first published in 1901 as ‘The Making of a Marchioness’, which was followed by a sequel, ‘The Methods of Lady Walderhurst’. Later the two novels were , combined into one, under the title ‘Emily Fox-Seton’.
Posted by Christine Harding at 5:58 pm

Email ThisBlogThis!Share to TwitterShare to FacebookShare to Pinterest
Labels: Frances Hodgson Burnett, meloadrama, The Making of a Marchioness