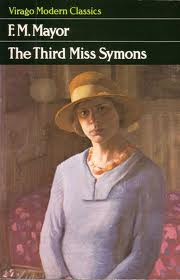 Henrietta was third daughter and fifth child of Mr and Mrs Symons, so that enthusiasm for babies had declined in both parents by the time she arrived. Still, in her first few months she was bound to be important and take up a great deal of time. When she was two another boy was born, and she lost the honourable position of youngest. At five her life attained its zenith.... When she was eight her zenith was past, and her plain stage began. Her charm departed never to return, and she slipped back into insignificance.

These opening lines of Flora MacDonald Mayor's The Third Miss Symons gave me high hopes for this novel, and I liked that rather ironic, detached tone, and the exploration of relations within a family. But overall I was disappointed and I found it hard to like Henrietta – or Etta, as she is known to her family - and it's a somewhat bleak tale.

Henrietta reminded me of Alex, in EM Delafield's 'Cosequences' (http://chriscross-thebooktrunk.blogspot.co.uk/2012/09/consequences-beware-of-spoilers.html ). They are set in a similar period, and although Mr and Mrs Symons are middle class their attitude towards their offspring is very much like that of Alex's aristocratic parents. Mrs Symons is not fond of children (so it's unfortunate really that she has so many of them), while her solcitor husband finds it difficult to provide for his ever-increasing family.

The only person Henrietta gets along with is her youngest sister, Evelyn, who she adores, but when she causes a rift between them she becomes even more lonely and bitter, convinced that people despise her, and that nothing ever goes right in her life.

I could see how her experiences soured her and sapped her confidence and, just as with Alex, I felt sorry for an unloved child who grew into an unloved woman - but she was so disagreeable it was difficult to feel any sympathy. And once again I found myself wondering about the way Victorian and Edwardian women were treated, and how that treatment affected their attitude and relationships with their children.

Posted by Christine Harding at 12:01 am