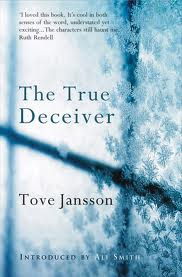 The True Deceiver by Tove Jansson is darker than either 'The Summer Book' or 'A Winter Book' (although 'The Squirrel', one of the short stories in the collection, is a little peculiar). But it is every bit as wonderful. With Jansson, little things mean a lot, and her writing is so deceptively simple it's almost hypnotic, drawing you into a strange world word by word, rhythm by rhythm. In 'The True Deceivers' you find yourself in an alien world of snow and ice that's bleaker and far more bitter than Narnia or the land of the Snow Queen.

“It was an ordinary dark winter morning, and snow was still falling. No window in the village showed a light,” writes Jansson. And you wonder, because the scene seems so extraordinary.

It had been snowing along the coast for a month. As far back as anyone could remember, there hadn't been this much snow, this steady snow piling up against doors and windows, and never stopping, not even for an hour. Paths filled with snow as quickly as they were shovelled out. The cold made work in the boat sheds impossible. People woke up late because there was no longer any morning. The village lay soundless under untouched snow until the children were let out and dug tunnels and caves and shieked an were left to themselves.

The residents of Vasterby are as cold and unemotional as the landscape in which they live. There is friendless loner Katri Kling, with her shaggy fur coat, and her eyes as yellow as the unnamed, wolfish dog which accompanies her everywhere. There is her younger brother Mats, who is slow and silent but dreams of designing and building his own boat. And there is elderly artist Anna Aemelin, who looks like a rabbit, and lives on her own in a big, old house (which also looks like a rabbit), and paints beautiful detailed pictures of the forest floor – then peoples them with unnatural, flowery rabbits.

Katri, regarded with suspicion by residents in the tiny Swedish village, is a mathematical wizard, who wants things to be clean and pure. She distrusts people and wants to make money so she never has to worry about it again, and her brother can have his boat, and somewhere safe to live. She befriends Ann, fakes a burglary at the old woman's home – then moves in, with her brother, and takes over Anna's life. She writes letters to the children who buy Anna's picture books, and examines her finances, claiming back 'missing' money and insisting on fees being increased. She keeps an account of everything in a little notebook, but extra money is set aside for Mats. And, most of all, Katri destroys destroys Anna's faith in humanity, telling her that everyone is cheating her.

Anna and Katri seem to have an almost symbiotic relationship, and each seems to supply something the other lacks, quite apart from companionship. They are opposites, in their nature and their view of the world, but by the end each has changed.

Anna never paints in the winter, but when spring comes, and the weather thaws, and the forest floor can be seen again, she finds she can no longer work, until Katri recants her earlier allegations about cheating, claiming she lied. Like much else in the novel, there is no way of telling whether this story is true, or whether Katri tells Anna what she thinks she needs to hear. At any rate, Anna is now able to pick up her brushes and paints, and begins to produce her best work, without the rabbits, which she no longer needs.

The novel raises questions about truth in relation to art, the way others see us, and the way we see ourselves. Truth and lies are not always easy to separate, and self-deception can be dangerous, and we need to be true to ourselves – but it can be hard to know what that truth is.

I love Jansson's writing, and can't understand why anyone would give her books away, but it's worked to my advantage, because I've found three of them, all published by Sort Of Books, and all in tip-top condition, looking as if they've never been read. So now I've got my eyes open for 'Travelling Light', 'Fair Play', and 'Art in Nature', which are also produced by Sort Of.

Edited: Oops, forgot the title!
Posted by Christine Harding at 1:00 am