Snapshot of a Lighthouse with no Light!

Today's Saturday Snapshot may look like a lighthouse on a hill, but it's never had a lamp, and it's not on the coast (although it does look out across Morecambe Bay). Perched on the top of Hoad Hill, in the Cumbrian town of Ulverston, it's known to residents as the Memorial, and was built to honour Sir John Barrow, who was a great traveller and naval man. Wherever you go in the town you can't escape it, and it's visible for miles around – when our daughters were small and we travelled up there they would watch eagerly through the car windows, each wanting to catch the first glimpse of the inland lighthouse.

Owned by the Sir John Barrow Trust, which is part of Ulverston Town Council, the Monument has been extensively repaired and restored in recent years, thanks to a grant from the Heritage Lottery Fund, and a lot of hard work from the Friends of the Sir John Barrow Monument and the Ulverston Partnership. The structure is based on one of the lighthouses built at the Eddystone Rocks at Plymouth – there have been four over the centuries, and the upper part of this particular one, known as Smeaton's Tower, stands up on the Hoe, where Drake played bowls while he waited for the Armada to arrive, but that's another story...

Sir John Barrow (by the way, his name is nothing to do with the nearby town of Barrow in Furness) was the son of a tanner. He left school at 13 to work as clerk in iron foundry, then joined a whaling trip to Greenland, and was part of a British Embassy expedition to China. His diplomatic work also took him to the Cape of Good Hope, where he married and set up home, but he returned to England in 1804 to become Second Secretary to the Admiralty – a position he held until 1845.
To get back to Sir John, he was born in 1746, at Dragley Beck, which must once have been a small village, or even a hamlet, but is now on the outskirts of Ulverston. The cottage where his family lived still stands and is occasionally open to visitors. It was shut during our visit to the area, but we have been inside because years ago it was a sweet shop, and I can remember going in with the girls, when it seemed to be very dark and musty. However, I assume restoration work has been carried out since then, and it is probably very different. We passed it each time we walked into Ulverston from the campsite where we stayed, and in the town itself one of the little alleyways off the main street has the most amazing murals showing Sir John's life and achievements. There are a series of beautiful, colourful paintings along each wall, and they are much too big to get into one photograph.

A keen astronomer, he helped develop navigation techniques, was a founder member of Royal Geographic Society, and promoted British exploration in various parts of the globe, including West Africa, and the north polar region, as well as supporting the search for a north west passage through the Canadian Arctic. During his retirement he wrote his autobiography and compiled a history of Arctic voyages.

Sir Robert Peel (MP for my home town of Tamworth), made him a baronet, in 1835, while Barrow Strait, Barrow Sound, Barrow Point and Cape Barrow were all named after him. And after his death in1848, at the age of 84, Ulverston honoured him by raising £1,250 through public subscription and building a lighthouse, with a lower room for a Keeper, and 112 steps leading to the lightless lantern room. Some 8,000 people climbed the hill for a special ceremony when the foundation stone was laid in 1850, and they must have been been jolly fit, because Hoad Hill is pretty steep. Mind you, all the hills on the Furness Peninsula seem pretty steep, and although we always promise ourselves we will walk up this one and look inside the Monument, we never do.
The Man of the House, who scrambled to the top when he was younger and slimmer, remembers buying fizzy pop and snacks there, and says you weren't allowed to climb the Monument in bad weather, which sounds sensible (I think a flag flies to show when it is open). The ground was certainly muddy after all the rain, and quite windy, and the thought of staggering 450 feet to the summit, then crawling up a spiral staircase which is almost 100 feet high, was singularly unappealing – so we wimped out again! 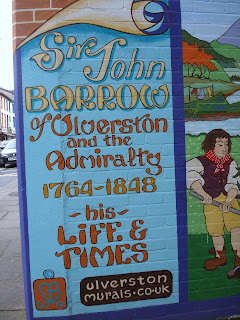